(Minghui.org) Falun Gong practitioners from Germany's Rhine-Neckar region have been holding activities in nine cities almost every Saturday since July 2020. They introduce Falun Gong to the local residents and expose the Chinese Communist Party’s (CCP) 21-year-long brutal persecution of their faith, especially the state-sanctioned organ harvesting from living Falun Gong practitioners in China. 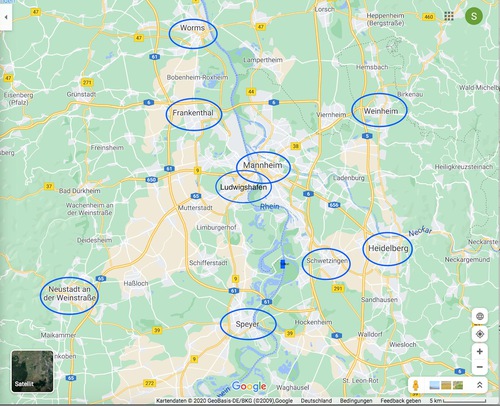 The Rhine-Neckar Metropolitan Region is the seventh largest economic zone in Germany. The headquarters of the largest chemical company BASF is located there, and so are the offices of the software giant SAP. The area is also rich in cultural and historical monuments. Heidelberg and Speyer are among the most famous tourist destinations in the region. 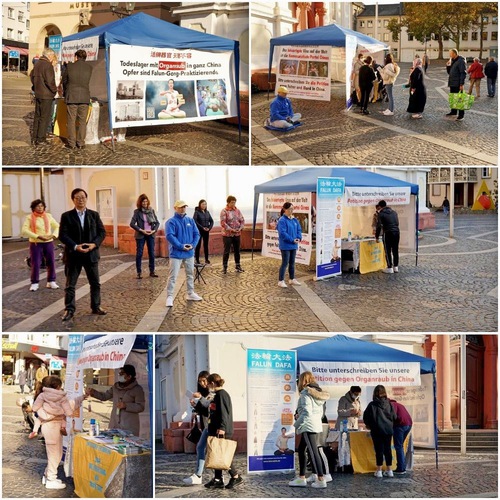 Practitioners hold an event in Frankenthal. People wait in line to sign a petition condemning the persecution of Falun Gong in China.

October 31, 2020, was the last weekend before the German Government announced another partial lockdown. Although it was already late autumn, the weather was still mild and sunny. Practitioners set up an information booth on the city hall square. A small band happened to be playing opposite them. The square was very lively because many people had come out to enjoy the warm weather.

An elderly woman looked at a banner about forced organ harvesting and told a practitioner that she completely believed that what was written there is all true. She is a Buddhist and had visited Nepal and Tibet. She said she adores the Dalai Lama very much and is aware that all religions in China are subjected to persecution.

An elderly couple from Romania stopped by the banners about the persecution and read the information carefully. The woman told a practitioner that they knew the persecution was all true. She shared how she grew up when Romania was also a communist country. She said she knew what life is like under such a regime. 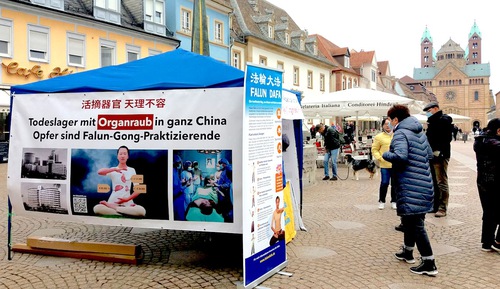 On a mild Saturday morning, Falun Dafa practitioners gathered near the cathedral on a pedestrian street in Speyer. They set up several huge banners and posters with information about the persecution.

They demonstrated the five sets of Falun Dafa exercises with the soft and peaceful music. The sight attracted many local residents and tourists, who stopped to watch the demonstration. One woman stayed for quite a while and was interested in learning the exercises. A practitioner provided her with the location of the nearest practice site and exchanged phone numbers with her to keep in touch. The lady said she would look for more information on the Falun Dafa website.

An elderly woman stared at a banner about forced organ harvesting. She was shocked and approached the information booth. “How could this kind of thing happen? It should never be done,” she said before signing the petition right away.

Event in Worms on the Upper Rhine 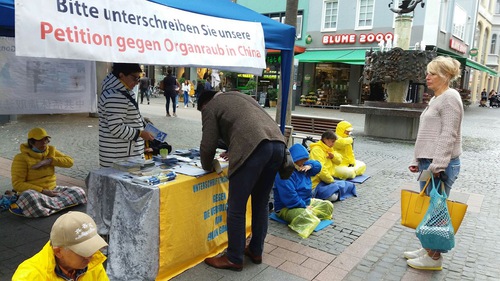 Event in the city of Worms in Rhineland-Palatinate on September 26, 2020

An elderly woman saw a banner at the practitioners' event in the city of Worms. She was shocked and asked who was responsible. A practitioner answered that the CCP had initiated the persecution under the direct order of former Party leader Jiang Zemin. Without hesitation, the woman signed a petition against the persecution of Falun Gong and said that she opposed the CCP.

At the end of the event, when the practitioners were packing up and preparing to leave, a young couple with a baby stroller came by. They asked if they could still sign the petition. They explained that they had received a flyer earlier that day. After reading the flyer, they learned about the mistreatment of Falun Dafa practitioners in China and the live organ harvesting, so they decided to come back to sign the petition. 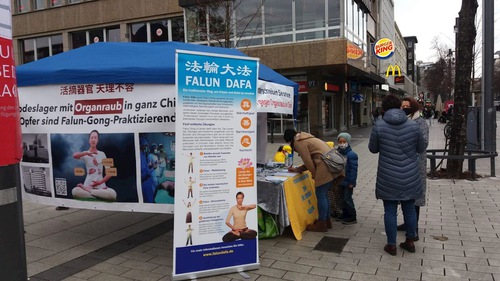 Event held near the Mannheim Water Tower on November 13, 2020. 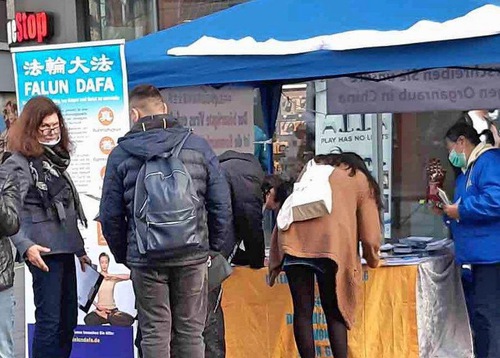 People learn about Falun Gong and sign the petition against the persecution at the practitioners’ stand at Marktplatz in Mannheim on November 14, 2020.

Falun Gong practitioners held events at the Water Tower and Marktplatz in Mannheim on November 13 and 14, respectively. Many people signed the petition against the persecution.

Hubert Körper from the China Working Committee of the International Society for Human Rights (ISHR) spoke at the event. He said Falun Gong practitioners practice Truthfulness-Compassion-Forbearance but the peaceful and kind group is being persecuted in China and even subjected to live organ harvesting. He also condemned the CCP’s suppression of Tibetans, Uighurs, and the Hong Kong people.

Körper talked about the CCP's cover-up of the initial coronavirus outbreak that led to a global disaster. He called on Germany's government to take a stand against the CCP’s persecution of human rights and religious groups. He also called on the German people to make a righteous choice.

A woman pushing a stroller accompanied by her teenage daughter paused in front of the booth and said she worried about human rights in China. She wished China could have freedom of speech and belief in the future. Her daughter listened to a practitioner explain the persecution and accepted some informational materials.

A girl in wheelchair listened to Körper's speech and was shocked to hear about the CCP’s live organ harvesting. She said, “What? Live organ harvesting? No. I cannot believe such a thing happens in today’s world.” She accepted a flyer from a practitioner and said she would learn more about it after going home. 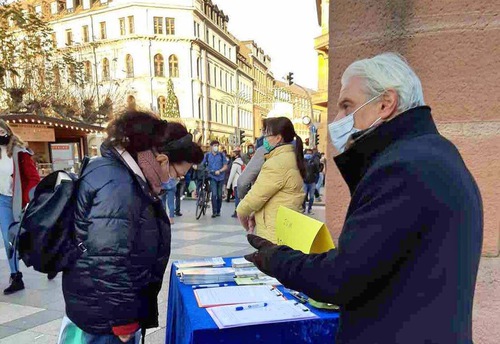 An information stand at Bismarckplatz in Heidelberg on November 21, 2020.

Several Chinese people looked at the Falun Gong stand while waiting for a bus. A practitioner stepped forward to greet them and learned that they worked in Munich and had come to Heidelberg as part of a tour that weekend.

“The Seemingly Impossible Is Possible”