(Minghui.org) Today's news from China includes incidents of persecution that took place in 18 cities or counties in 8 provinces, where at least 34 practitioners were recently persecuted for their belief. 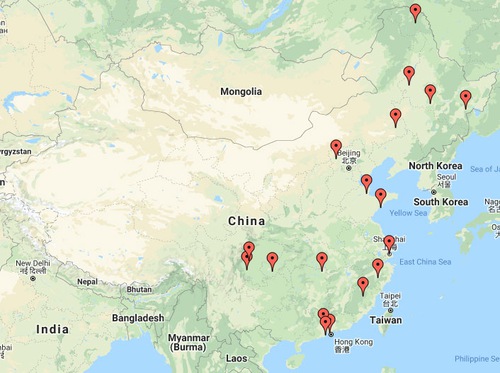 Ms. Guan Yanfeng in Hulin City is scheduled to be tried in the Jidong County Court on November 18, 2020.

Ms. Zhao was given a seven-year prison term and fined 20,000 yuan by the Huangdao District Court. Mr. Cui was given two and a half years in prison and fined 10,000 yuan. They both appealed.

Ms. Zhang Fuming in the Jiangjin District was followed and arrested by plainclothes officers on the afternoon of November 13, 2020, for talking to people about Falun Gong.

Three or four people from the Jidi Police Department and local community went to Ms. Zhao Ruizhen’s home on November 10, 2020. They ordered her to sign paperwork, but she refused to. They found Ms. Zhao’s daughter, intimidated her, told her to persuade her mother to sign, threatening that they would come again if her mother did not sign.

Ms. Huang Runlian, 80, clarified the truth to a student outside the Technical Supervision School on November 9, 2020. The student grabbed her clothes and called the police. Ms. Huang was arrested and taken to the Suishan Town Police Station. The student was also taken to the police station.

The officers took keepsakes and DVDs with software for circumventing the internet firewall from Ms. Huang's bag. They demanded to know where she’d gotten them, interrogated her, told her to sign the paperwork, and then released her.

Ms. Li Dan was arrested near her home while she was talking to people about Falun Gong on November 13, 2020. She was arrested and is being held in the Nanshan District Detention Center for 14 days of detention.

Ms. Li Yuefen from Huzhen Town was arrested by town officials and the police at around 6:00 a.m. on November 10, 2020. She is being held in the Xiaoyun Brainwashing Center.

Ms. Qian Peizhen’s blood sample, fingerprints, and pictures were taken against her will by officers from the Puxing Sub-district Police Station on October 14, 2020.

Ms. Lu Guizhen in Erdaowan Town, Fuyu County, was arrested in Daqing City by Erdaowan Town Police Station officers on November 13, 2020. She was taken back to her hometown. Her current whereabouts are unknown.

Officers from the Qinglong Agency and Tongjiang County Police Department broke into the home of practitioner Yang Jin (gender unknown) in mid-September 2020. They interrogated and took pictures of Yang and ransacked the home.

Officials from the Kangjin Town Political and Legal Affairs Committee and seven or eight officers led by village Party secretary Si Guozhu and villager Zhang Wei went to the home of practitioner Xu Xiaoshan (gender unknown) in Yongsheng Village on the morning of November 13, 2020.

They ransacked Xu’s home and confiscated four copies of Zhuan Falun, Fa-lectures, and weekly publications. They told Xu to sign a guarantee statement renouncing Falun Gong, which Xu refused to do.

Two people held Xu by both arms to take pictures. They also took pictures of all the items confiscated.

They then went to Ms. Yu Chunyan’s home, ransacked the place, and confiscated all her Falun Dafa books. They took pictures of her and all the confiscated items. They threatened her to sign paperwork.

Li Dawen (head of Daxing’anling Timber Yard), Chang Jiangying and Hao Meng (deputy heads of the yard), and Wang Xingpeng (deputy director of a police station) scheduled and had a talk with Ms. Xia Xiumei and her husband on the morning of November 13, 2020. They tried to persuade the couple to sign paperwork.

At the trial, the six practitioners defended their innocence calmly and rationally. They refuted the evidence presented by the prosecutor.

They made frequent trips to the practitioners’ workplaces and homes. The officials threatened that if they did not “transform,” their children would not be allowed to graduate from college or find jobs.

Party members from the Yueyang City Government broke into Ms. Li Xiaoyang’s home and harassed her on November 9, 2020. They told her to sign paperwork. They took pictures of her and her husband against their will. They also took pictures of every room.

Three people from the Chaoyang Community in the Sanyanqiao Sub-district went to Ms. Wang Liping’s storefront on November 2, 2020, and asked her if she still practiced Falun Gong.

Personnel from the Comprehensive Management Office in the Sanyanqiao Sub-district Administration Office called Ms. Zhang Xiaowei’s husband on November 2, 2020, and asked if his wife was still practicing Falun Gong. They threatened that they would deal with her harshly and said that she had to go to the administration office, the community office, and the police station in person.

Ms. Shen Chunfang’s daughter received a call on November 5, 2020, from a stranger, who asked if her mother still practiced Falun Gong. The stranger threatened her that a zero-out campaign (a concerted drive to force practitioners on the CCP’s blacklist to renounce Falun Gong) was underway. If her mother insisted on practicing, she would be taken to a brainwashing center and be harshly dealt with. The harassment has caused the family a great deal of stress.

Mr. Zhu Musong lives in the Fengshuxincun Community in the Wangjiahe Sub-district. Community personnel called and harassed one of Mr. Zhu’s family members at work several times on November 10, 2020. When the family was about to go to bed that evening, a community staff member called and harassed them again.

“On the Topic of “Birth, Aging, Sickness, and Death””

“Stuttgart, Germany: People Call for an End to the CCP and Forced Organ Harvesting”