(Minghui.org) During the age of information explosion, it can be rather challenging to distinguish good from evil and search for truth in the enormous amount of information published by traditional news media and posted on social media. Information from modern day news media is often selective, biased, and manipulated, said Richard Boutry, host of Minutes Ricardo, during a recent interview with NTD Television in France.

A former host of France Television, TV5Monde, and France 3, Boutry said that the independence and integrity of journalism had been lost in France, America, and around the world, which has posed a serious threat to our society.

This is unacceptable, he explained. After all, “Facts do not cease to exist because they are ignored,” he cited a quote from Aldous Huxley, an English writer and philosopher. 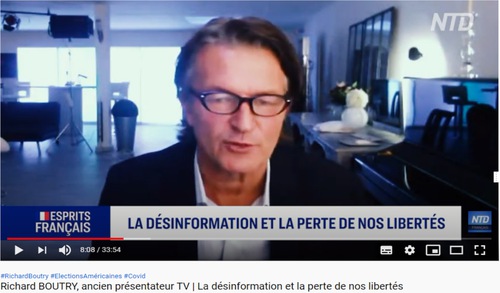 Achievements of Trump and Election Fraud

During the interview, Boutry talked about the recent U.S. election fraud and media disinformation. He praised Trump for his accomplishments in the past few years as the U.S. President.

Boutry said that compared to other great presidents in American history, Trump not only advocated for peace and gave power back to the people, but also promoted traditional values and faith in God. Trump's accomplishments also include significant economic growth and lowered poverty rate. Some depicted Trump as a militant, but he did not launch a single war during his tenure and even withdrew troops from Afghanistan. All these efforts had successfully restored the American spirit.

This progress was possible thanks to Trump's great vision in international relations. Boutry said he had watched speeches by Trump and read some materials about him. “Trump has cleaned up all this putrid swamp that exists today that would truly impair future generations,” he remarked.

As for the current situation, Boutry believed the support from Pentagon, military, and National Security Agency had defeated plans to control the public by the CIA, FBI, television news media, and technology giants such as Google. He said the CIA could have been involved in the scandal related to Smartmatic and Dominion.

Given the biased and even fake news reporting by mainstream media in the U.S. and France, Boutry said many media outlets, including TV, have lost their independence, as they have been speaking the same voice, which is a serious challenge to the free world.

As a program host and editor, he is familiar with how news is produced from beginning to end. That is why he was shocked to see that news media had a concerted tone on almost all issues. That means freedom of speech was essentially lost and everything came from a central news center.

“I stand up against this globalist power which truly imposes its deadly idea behind all of this,” he explained, “I think that there is really the Communist Chinese model. It is starting to come in gradually but in a very methodical way. It is quite pernicious behind all these.”

He encourages people to be alert on this, starting by looking for independent voices and facts. Otherwise, we will all end up being prisoners with electronic tagging, and victims of communism.