(Minghui.org) Today's news from China includes incidents of persecution that took place in 18 cities or counties in 11 provinces, where at least 48 practitioners were recently persecuted for their belief. 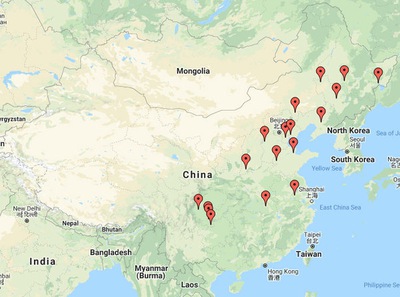 Ms. Xie Huajun was arrested and held at the Naxi District Detention Center in Luzhou City in early October, 2019 for talking to people about the persecution of Falun Gong. The Lu County Court sentenced her to three years in prison and three years on probation in early November, 2020. Ms. Xie is at home and in poor health. She is under house arrest.

Ms. Tang Zhuqun, Ms. Ao Qizhen, Ms. Peng Zhaoqun, and Ms. Zhang Xinglian will be tried in No. 4 Court, Jiangyang District Court on November 24, 2020. The practitioners were arrested on September 10, 2019, and have since been detained.

Chinese Communist Party recently started a nationwide “Zero-Out Campaign”, a concerted effort to force every single practitioner on the government's black lists to renounce Falun Gong. The Wenxi County Political and Legal Affairs Committee ordered relevant units at all levels to harass practitioners and their families in November, 2020.

Ms. Li Cai’e was harassed by people from the same work unit in the evening of November 8, 2020.

Ms. Qiu Fenghua was harassed at home by community agents on November 9, 10, 13, 2020. Community director and community Communist Party secretary Zhang Guangyuan ordered her to sign a guarantee statement on November 10. After she refused, Zhang said twice, “I will kill people if Communist Party asks me to kill.” Zhang also said, “We could not make you do it. People on the top will. Will give you a ‘class’. Your family will be implicated.”

Several practitioners were arrested and released in October, 2020. Chen Jun (gender unknown) was among them. He was arrested again around November 15 by officers from the Railroad Station Police Station.

Ms. Hua Liqin and her husband, Chen Jun, Sun Xiu’e, Li Guihua, Zhang Liang, Xu Shaohua [five practitioners’ genders are unknown] were arrested at Ms. Hua’s home by officers from the Jinan City Railroad Police Department and the Liaocheng Railroad Station Police Station after 9 p.m. on October 16, 2020. The practitioners were taken to the police station. Police took each practitioner’s fingerprints and extorted 10,000 yuan as “security deposit”. Chen Jun did not comply, no fingerprint, no deposit.

Practitioner Guo Xiuping’s home [Guo’s gender is unknown] was ransacked by officers from the Guan County Police Station and the Liaocheng Railroad Station Police Station at 7 a.m. on October 17, 2020. The officers seized Falun Gong books and materials, and Guo’s child’s company computer, printer, and paper. The family went to the police station twice for the company computer and other properties. But the police station did not return the items.

Practitioner surnamed Lu, and four other practitioners’ homes in the family compound of Dongchang Road Railroad Management Bureau were ransacked by officers from Dongchangfu District 610 Office and Domestic Security Division on the morning of November 12, 2020. The officers seized Falun Gong books, truth clarification currency, and other properties.

Ms. Xiaohong (family name unknown) went to practitioner Wang’s home after taking her child to school on the morning of November 17, 2020. They left Wang’s home together and were arrested by officers who had been waiting there. They were taken to the Weizigou Detention Center on November 18. Xiaohong’s home was ransacked. All Falun Gong books and related materials were gong. Her family member came home in the afternoon and found the lock was changed.

Mr. Luo Qingsheng was arrested at home at the end of October, 2020. It was learned recently that Mr. Luo had been held at the Gulin Detention Center.

Ms. Han Shuqin’s husband and daughter received a call from director Wu Hongxia from Tianbei Community, Tianyi Town, Ningcheng County on November 11, 2020. Wu demanded a meeting with Ms. Han, “if she does not show up, officers from the police station and police department will look for her.”

Before November 11, Wu and another person went to Ms. Han’s home. But no one was at home. They asked her neighbor for her husband’s number. The neighbor said, “I do not know it.”

On the morning of November 17, 2020, officers from the Tiedong Police Station and agents from the street and community came to Ms. Han’s home and looked for her. They said, “where is she?” “We will drive and search for her.” “We will give you three days, (she) must be back.” They videotaped around the place.

Ms. Zhang Yuling of 855 Farm was arrested on August 19, 2020. Her home was ransacked. She has been held at the Jixi Detention Center. The local police station and Mudanjiang Agriculture and Reclamation Bureau Police Department are responsible for the persecution against Ms. Zhang.

Ms. Dong Hong received harassing calls from agents Zhengyang Street Office and Daqiao Community separately around 2 p.m on November 16, 2020. The harassers ordered her to either sign repentant statement in the community office or provide a videotape showing her signing it. Ms. Dong refused. The harassers called again several times, said that, if she did not come to the office, they would go to her home. They did go to her apartment around 5:30 p.m. on November 17. They knocked on the door but no one answered.

Ms. Tao Zhen was arrested at home by seven officers from the Yulinkou Police Station at noon on November 13, 2020. The officers ransacked the place, confiscated Falun Gong books and a speaker playing exercises music. They pushed Ms. Tao into a police car and brought her to the police station. She was released after 4 p.m.

Ms. Wang Chunhua was arrestedin downstairs of her home by officers from the Yihe Road Police Station after 5 p.m. on November 14, 2020. She was taken to the No. 1 Hospital of Jilin University for nucleic acid test, then to the police station. She has been released.

Ms. Wang Pingying was harassed at home by two men claiming to be officers from the local police station in early October, 2020. The men asked if she still practiced Falun Gong. She replied “yes”, and told them the benefits of practice. The men said, “We do what we were ordered to do, to visit your home and complete our task.” They then left.

Bai Baohua (gender unknown) was arrested at home by officer Han Limin and three plainclothes officers from the Yuanbaoshan Town Police Station on the morning of November 16, 2020. The officers ransacked Bai’s home; confiscated Falun Gong books, about 500 copies of calendars, and other Falun Gong materials; and detained Bai in the Pingzhuang Detention Center. Practitioners Sun [gender unknown] was harassed the same day.

Ms. Liang Shufen was harassed at home and by calls from the Yiminyuan Community Residents Committee during August and September, 2020. Agents said that the Political and Legal Affairs Committee ordered them to do it, and, children would be implicated if parents practiced Falun Gong. Four other practitioners or practitioners’ families were harassed, too.

Mr. Zhong Guoquan was sentenced to three years and six months in prison by the Mishan City Court on August 18, 2020. He appealed to the Jixi City Intermediate Court. The intermediate court affirmed the sentence on October 28, 2020.

Mr. Zhong was taken to prison’s training camp at 7 a.m. on November 17, 2020. He will be held in the camp for three months before he is assigned to a prison.

Mr. Du Yubo was harassed at home by three officers from the Yucai Road Police Station in mid-October, 2020. He clarified the truth to them. They left.

Mr. Du was harassed by three people from Shangmatai Township Political and Legal Affairs Committee, and Residents Committee, plus village Communist Party secretary Du Yuchi in the end of October, 2020. They ordered Mr. Du to sign three statements. He rejected. One week later, they called him to schedule a meeting. He refused.

Ms. Li, in her 50s, was arrested by officers from the Wenhua Police Station on the afternoon of November 18, 2020, when she was talking to people about the persecution of Falun Gong.

Tian Shiqun (gender unknown), 65, was harassed at home by officers from the Qinglong Town Police Station and agents from Comprehensive Management Office on November 18, 2020. The harassers ransacked the place.

Li Ermei (gender unknown) was arrested and detained in November, 2020. Details are unknown.

Ms. Wang Guofen was arrested by officers from the Gongnong Police Station on the morning of November 17, 2020. Her home was ransacked. Her 87 years old mother-in-law was scared and left alone at home without care.

“Seeking Justice and Truth – Reflection on the Pennsylvania Senate Hearing on the U.S. General Election”