(Minghui.org) The Falun Dafa Association of the Netherlands submitted signatures to the House of Representatives of the Netherlands (Tweede Kamer) on December 10, 2020, International Human Rights Day. They called on the Dutch government to take legal measures to prohibit organ tourism from the Netherlands to China, to condemn organ harvesting from Falun Dafa practitioners and other prisoners of conscience in China, and to stop the persecution of Falun Dafa. 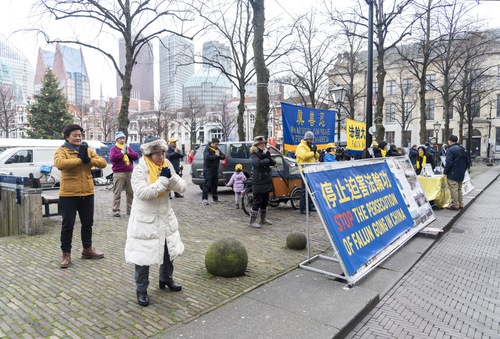 Practitioners do the Falun Dafa exercises on International Human Rights Day at the House of Representatives of the Netherlands. 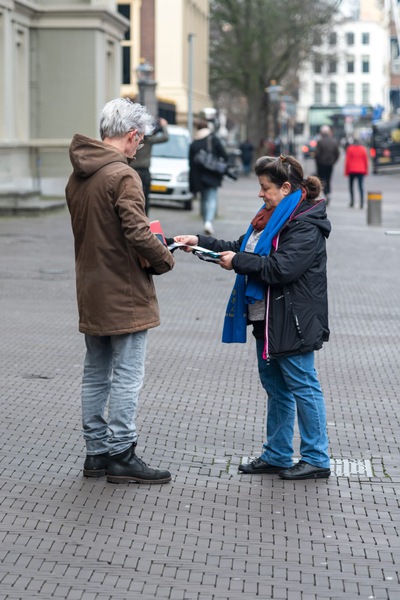 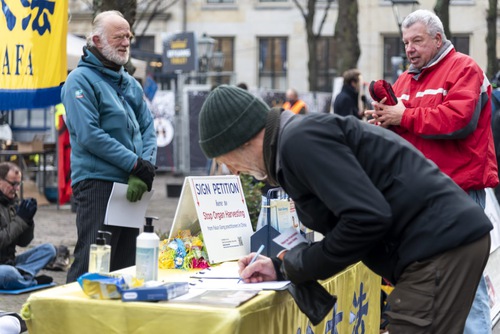 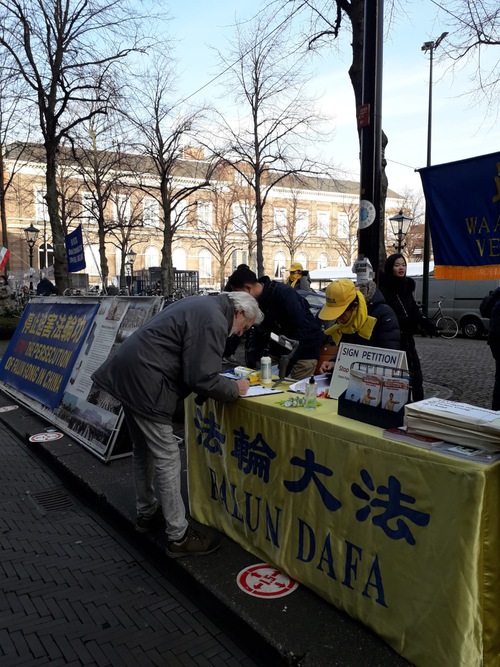 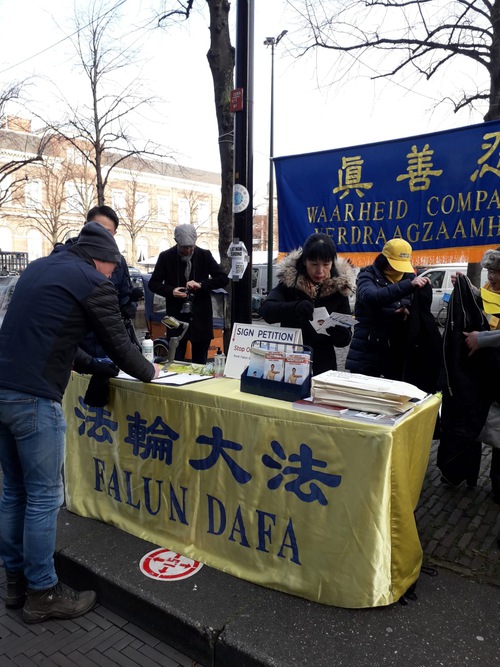 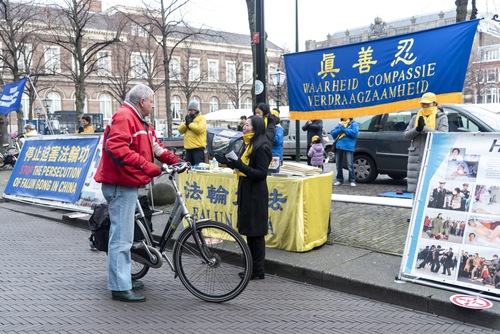 Explaining the facts about Falun Dafa 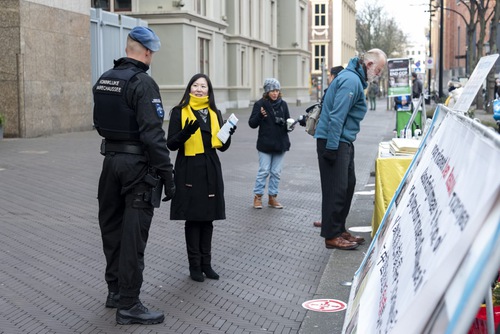 A practitioner talks to an officer about Falun Dafa and the persecution in China.

Mr. Martijn van Helvert, Member of Parliament, stopped to talk to the practitioners in the afternoon. He formally accepted the petition forms on behalf of the Dutch Foreign Affairs Commission. The petition urges the Dutch government to help stop the Chinese Communist Party (CCP) from killing Falun Dafa practitioners for their organs and to help end the persecution of Falun Dafa in China.

A banner displayed during the handover ceremony read, “Stop CCP from killing Falun Dafa practitioners for their organs!” in both Dutch and Chinese. 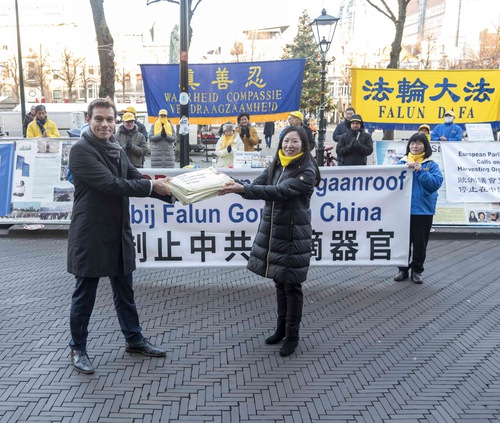 Ms. Wang Jiaen, president of the Dutch Falun Dafa Association, said at the event, “The CCP continues to persecute Falun Dafa. Some practitioners have even been killed for their organs. We initiated this petition in order to expose the persecution and stop it. We hope that the Dutch government can take action to stop the persecution and stop the CCP from killing practitioners for their organs.”

Mr. van Helvert said, “Thank you for your work! You are brave for doing this. If you are threatened by the CCP, please make sure to report it to the police. We will create a case for this.”

Mr. van Helvert emphasized, “We will continue our efforts, no matter how difficult it is to address China’s human rights issues. I will continue to pay attention, and have them stop. We must let the CCP know that every person is a pearl and every individual has value. China is a beautiful country. I want to say that the Chinese people should have a better government. We are not against China or the Chinese people. We are against how the CCP behaves.”

Representatives of three parties attended the meeting. Among them were Mr. Martijn van Helvert from the Christian Democratic Party (CDA), Ms. Liliane Ploumen from the Labour Party (PvdA) and Mr. Bram van Ojik of the Green Party (GL). Mr. van Helvert presided over the meeting on behalf of the Foreign Affairs Committee. Ms. Ploumen was Minister of Foreign Trade and Development from 2012 to 2017.

Ms. Wang Jiaen introduced Falun Dafa. She said that Falun Dafa was very popular in China after it was introduced in 1992. However, when a hundred million people started practicing it within 7 years, it aroused the envy of the CCP authorities. She said, “Beginning in July 1999, the CCP mobilized all of its state machinery to persecute Falun Dafa practitioners and their families. Practitioners were detained, sentenced to prison and subjected to cruel torture. Some of them were even killed for their organs.” Ms Liliane Ploumen expressed deep sympathy after listening to the introduction.

Ms. Susie Hughes from the International Coalition to End Transplant Abuse in China presented some findings of the China Tribunal. She said, “Forced organ harvesting is still going on. Falun Dafa practitioners are the largest donors.” Ms. Hughes suggested some practical actions to the congressmen to help end the forced organ harvesting. Members of Congress said that they found her suggestions very useful.

Mr. Wu Wenxin, executive director of the International Society for Human Rights, then explained the roots of China's human rights issues and the nature of the CCP to the meeting attendees.

“How to Handle Harassment with Righteous Thoughts”