(Minghui.org) Despite the rain, over one thousand people peacefully gathered in front of Michigan's State Capitol in Lansing on December 12, 2020. On the same day, thousands rallied in Washington D.C. to support President Trump and to expose election fraud.

Since election day November 3, increasing evidence points to election fraud and continues being exposed. Every weekend people gather in front of Michigan's state capitol to demand this election fraud end.

They held various banners worded: “God Blesses America”, “Stop Election Fraud”, “Safeguard Our Freedom”, and “Let America Be Great Again”. Many people knelt in the rain and prayed to God. They expressed their firm belief that President Trump will lead America to be great again, and that justice will prevail over communism and fraud. 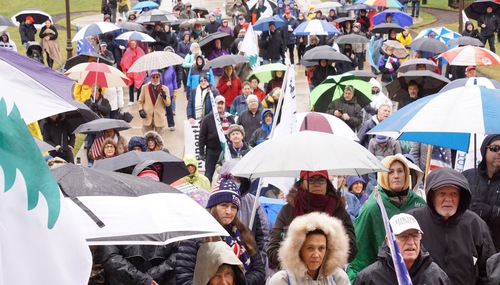 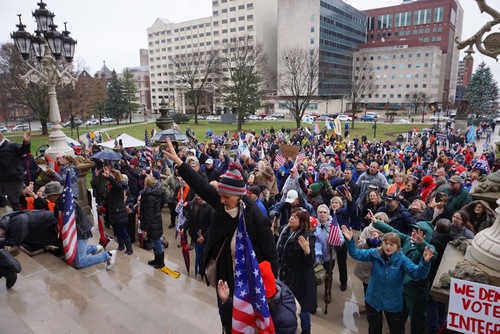 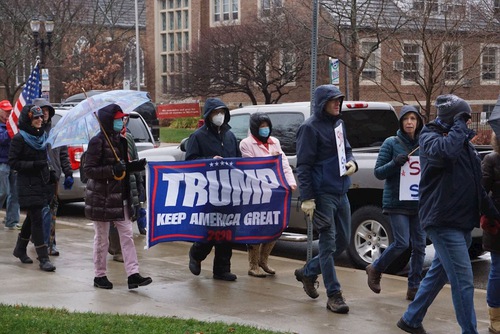 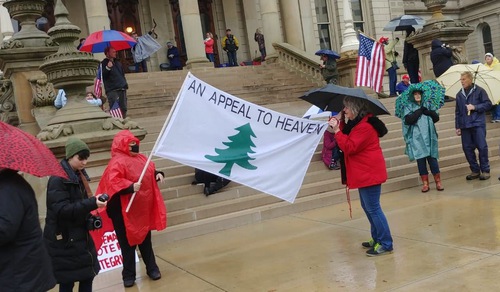 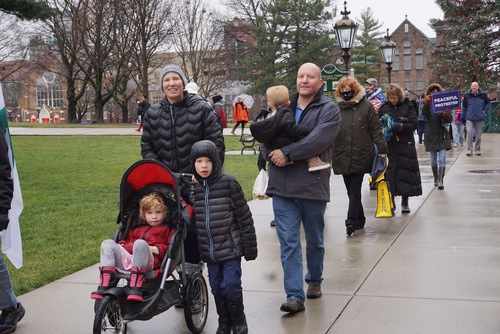 People peacefully gathered in front of the State Capitol in Lansing, Michigan despite the rain on December 12 to draw attention to the on-going election cover-up.

We Don't Want to be Associated With Communism

Rick Warzywak, Director for Prayer House and Transformation Michigan Ministry, led the public to pray during the rally. He said, “Today is a day of seeking God and appealing to heaven. We are marching here to the Capitol building in order for the evil things to fall down and that God’s pureness will rise up.”

He said, “That’s why we are here today. We believe that people pray, God hears, and He will answer our prayer.” 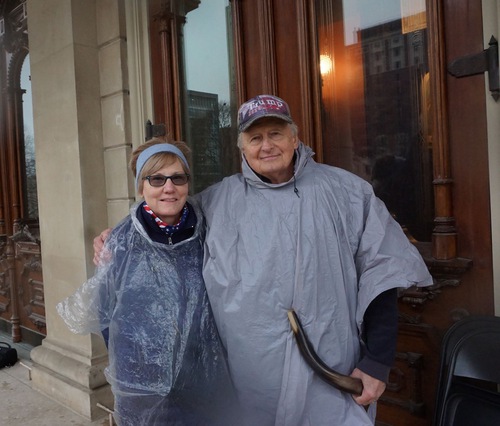 He said he knew there was widespread fraud in this election and so he came to the state capitol to pray for wisdom from God. He believes that President Trump will win because he fights for America’s traditional values.

He said, “When he says Make America Great Again, he’s talking about America leading in righteousness, as a strong nation, not being used or misused, taken advantage of by other countries, especially China. And I stand with him. I believe in America.” 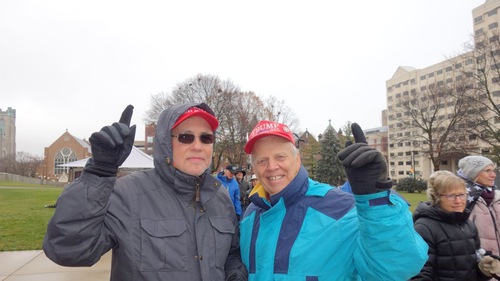 Timothy Parker and his friend Larry Van Beek feel the fraud happened due to increasing moral decline in the U.S.

Timothy Parker and his friend Larry Van Beek joined the rally. Parker has a Doctorate in Theology. They feel the reason for this large scale and premeditated election fraud is due to a steady moral decline in the U.S. for many years. The role of churches and people’s belief in God and morals are declining.

Parker said, “Thomas Jefferson warned if we lose morality, we will lose our republic.”

Van Beek said, “What caused this problem was that we have gotten away from God. Many people have become cowards. We do not preach the gospel in a lot of churches, so the churches are very weak today. I am not saying all of them. But we have a lot of so-called Christians that do not really proclaim the truth of God.”

Van Beek said, “God has His people and He brings them in. So if we do not understand that God wants to redeem people from their sin, that's the biggest issue. When we set aside sin and we exalt sin, we’re in trouble. Even though we have many Christians in our country, in fact that many people have forgotten God and exalt sin, that's why we're in trouble.”

“I really believe that Donald Trump won this state and I think that Republican legislators have to come together and bring justice to Michigan and I don’t think they are,” Kurt said.

Talking about traditional values and socialism, Kurt said, “I think this is the Communist Party of China and I think they want to dominate the world and they cannot dominate this world as long as Americans can be strong.” 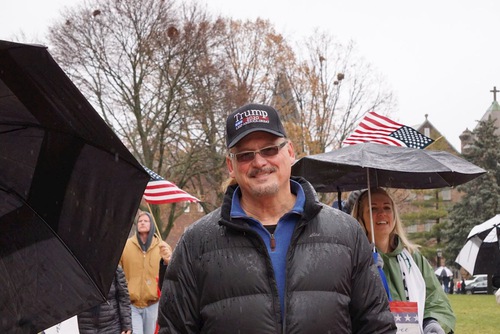 Kurt pointed out that, “The left does not like President Trump because he upholds traditional American values.” He hopes his grandson's generation can grow up in freedom. “I believe that if Donald Trump doesn't keep fighting, I don't think we will keep our freedoms. I think they will take our freedoms away from us just like they force us to shut down houses of worship. I think Donald Trump is fighting for our freedoms and fighting for Americans.”

Telling Next Generation to Do the Right Thing: Stand Up for Belief

Heather Harding and her nine-year-old daughter Brooklyn joined the rally. Heather said that she was inspired to come,\. “First is for my children. I believe freedom is essential. Fighting for a lot of different reasons and mostly for my children and their future. 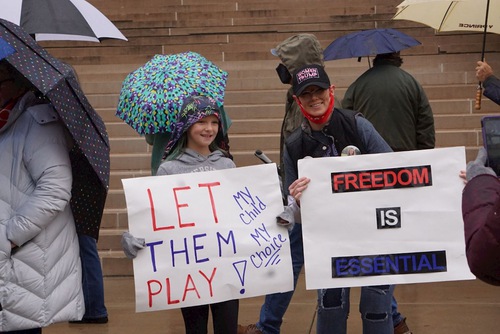 Lisa said she participated in the rally because of her love of God and her belief. Her friend Dean said, “Traditional American values are built on the belief that all men and women are created equal, that there is a God who made us and that he is the moral lawgiver, and people have value because that value comes from a lawgiver.

“The new ideology comes out of atheism and despair, which absolves itself to pretend to be God. But instead they want to make their own rules,. In so doing, they devalue humans and you get death and destruction in the wake of all socialism and communism.

“So I’m here for human life, for freedom and for American values that were built in the Bible's values and for families and neighbors and community.”

Lisa agreed, “I echo that completely. I think he summed it up well that we're here because our God called us here for the values. We don't want this country to be taken over by socialism and communism that allow us to not have any of our freedoms. Socialism and communism come from an atheist nation. We are God’s children. We love life. We love Family. We love traditional marriage.”

Dean said, “I believe truth will prevail. Evil always runs out of itself. Evil is overconfident because it doesn’t count on the creator of the universe, who won’t let it run without being judged.”

Lisa said, “They count on man and not God. We count on our God and not man. No matter what happens on Earth, God and good will prevail. We have to just be strong and persevere through all what he gives us with our faith and our love with him.” 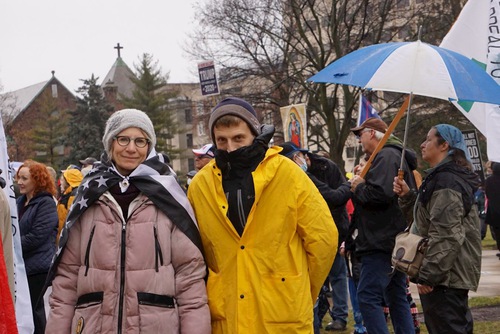 Lisa and Dean believe that God will prevail.

Many rally participants said they stood up to support Trump’s re-election not because of his affiliation with any political party, judicial system or administration but for basic rights and to safeguard the U.S. Constitution.

“Investigation Shows CCP Has Infiltrated Over 70,000 Overseas Agencies and Organizations”

“Washington DC Parade, People With Morality Are Stepping Out”