(Minghui.org) Falun Dafa practitioners held events in the Canadian capital of Ottawa on December 10, 2020, International Human Rights Day. They told people about the persecution of their faith by the Chinese Communist Party (CCP), displayed banners at major intersections, and collected signatures on a petition calling on the Canadian government to use the Magnitsky Act to sanction high-ranking CCP officials who abuse human rights. Many Canadians expressed their support and signed the petition. 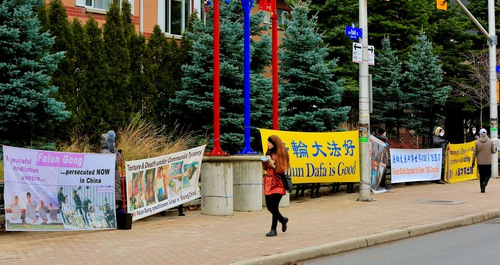 Practitioners display banners at busy intersections in downtown Ottawa to tell people about the persecution of Falun Dafa. 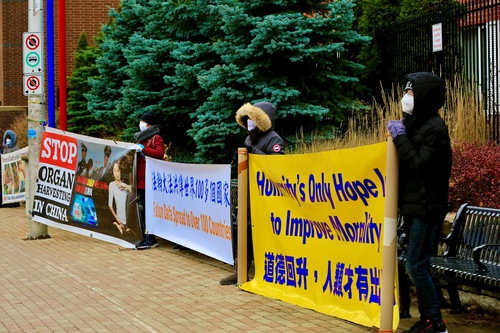 Practitioners raise awareness of the persecution of Falun Dafa. 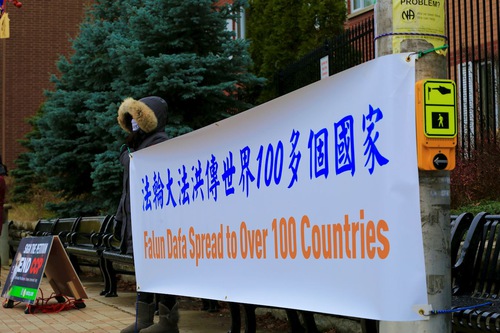 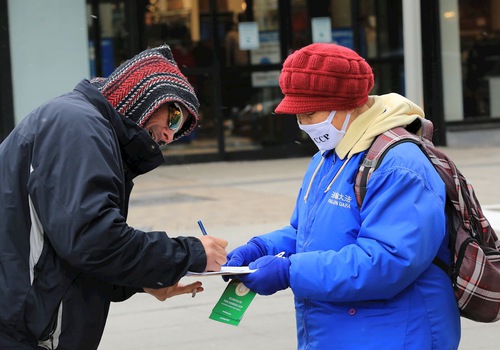 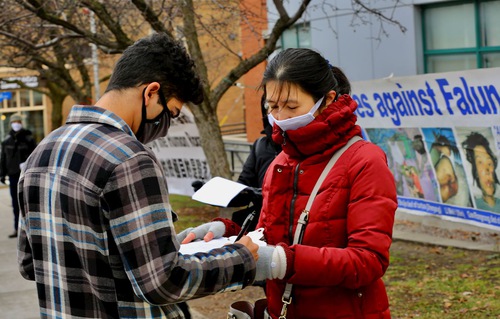 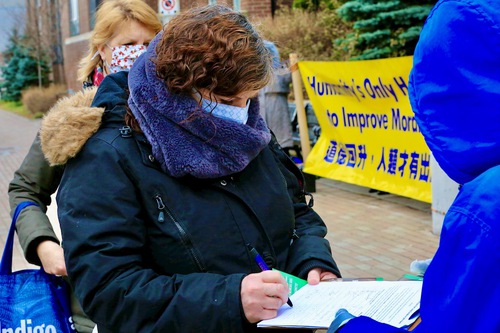 People Need Truthfulness-Compassion-Forbearance Even More During the Pandemic

Mr. Daniel Waselnuk is a former Canadian government employee. He said, “I saw practitioners doing the exercises on Capitol Hill. They are very peaceful. People should be allowed to practice Falun Dafa freely to achieve inner peace and tranquility.”

Speaking of Falun Dafa’s principles—Truthfulness-Compassion-Forbearance, he said, “We now need these values more than ever because during the pandemic, many people are isolated and feel lonely and vulnerable.”

He said he was shocked to hear that the CCP harvests practitioners' organs while they are still alive. He said, “The crime of live organ harvesting is terrible, just like the massacre launched by Hitler. All this has to stop immediately.”

He said the CCP has not only persecuted Falun Dafa but also harmed innocent Canadians. “Canadians Kevin and Julia Garratt were arrested in China. The CCP said they were spies, but in fact, they were innocent.”

“Mr. Garratt gave free clothes and food to the poor people at the border between China and North Korea. The Chinese government’s treatment of such an innocent man who helped the Chinese people is totally appalling,” Mr. Waselnuk said.

He said, “Canada is a sovereign country and should support human rights. I think Prime Minister Trudeau should send this message—that human rights should be more important than trading with China.”

Mr. Dennis Lortie said that he knew of practitioners’ peaceful resistance over the past 21 years. He said maintaining pressure on the persecutor is the best way to stop the persecution. “It’s a good way to ask people to sign the petitions, but it’s more important to come out and speak up as much as possible,” he said. “Many people only come out for one day when they make a petition, and then they stop. If you want to stop the persecution, you have to be persistent.”

He used an analogy that one can never boil water at a low temperature. Only by increasing the temperature will the water boil. He said this is why practitioners have to persist and that their efforts should not be temporary.

“Former Secretary General of Amnesty International: Time for the World to Speak Up Against Abysmal Human Rights Records in China”

“Understanding the True Meaning of the U.S. Election and Clarifying the Facts from Appropriate Angles”