(Minghui.org) With the warm, springlike weather preceding the holidays, southern hemisphere Christmas parades are very popular. Falun Dafa practitioners in New Zealand participated in ten Christmas parades in six areas and four cities on November 2-6, 2020. The areas in the northern island included Hamilton, Palmerston North, Te Awamutu, and Auckland. They also participated in the parade held in the south island's popular tourist city, Dunedin. Performances were given by the Tian Guo Marching Band, the waist drum team, and the dragon dance team. Tens of thousands of people attended these parades and the practitioners’ entry received the First Place Award in Te Awamutu.

The practitioners’ entry was warmly received during each parade. They brought season’s greetings and well wishes to the local residents. 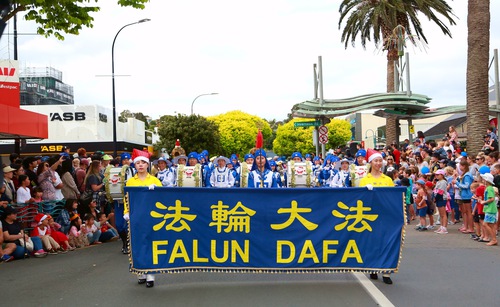 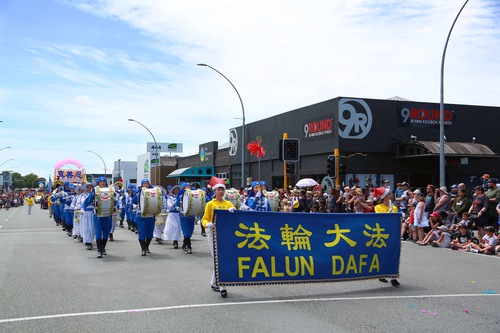 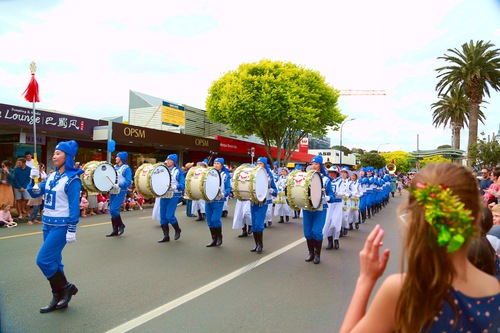 The Tian Guo Marching Band performed during the parades 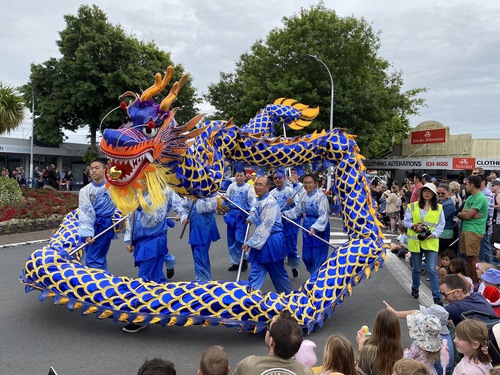 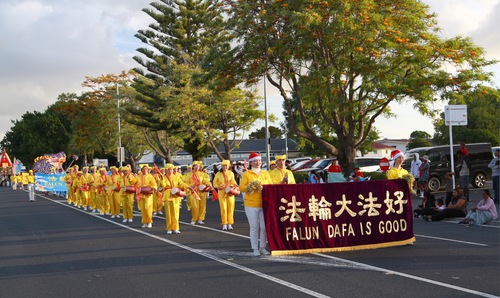 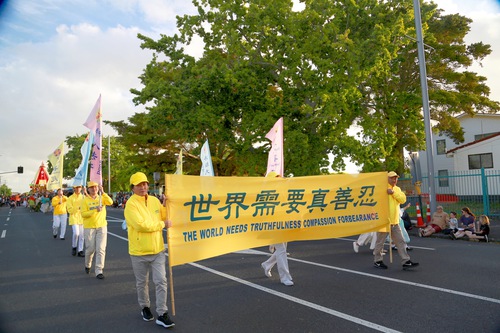 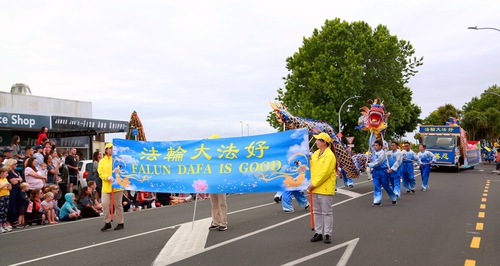 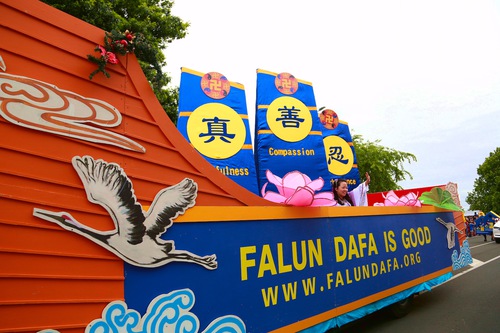 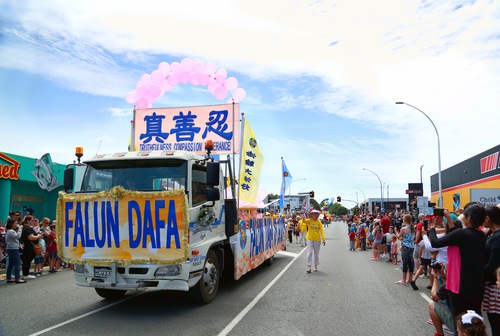 The Falun Dafa entry was warmly received during each parade. 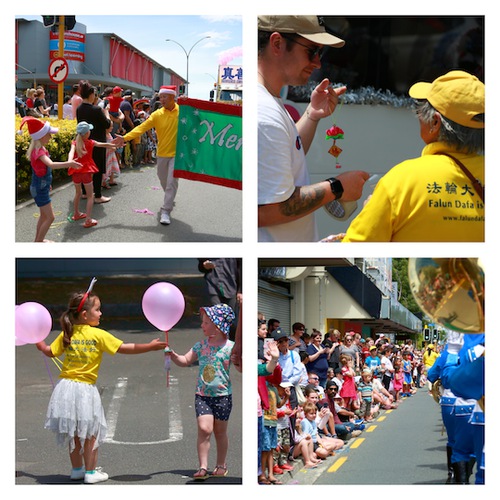 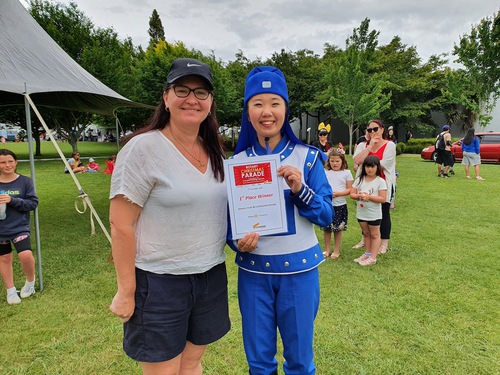 New Zealand’s popular news website, Stuff, reported on the Christmas parade in Palmerston North. The photo in the article featured a practitioner beautifully dressed as a fairy sitting on a lotus flower, waving and greeting the crowd. 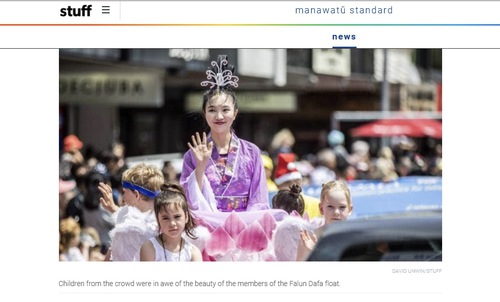 Photo on the website Stuff, featuring a practitioner dressed as a fairy. 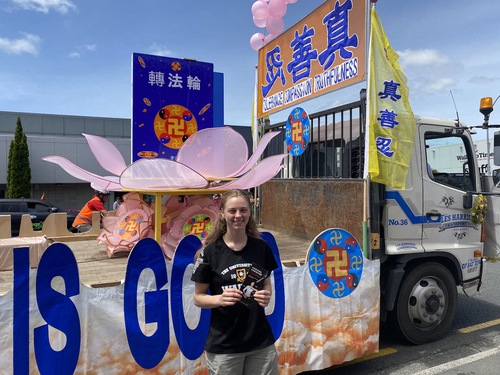 Twila Reid hopes that more people will express their concern about the persecution.

Twila Reid studies music at Hamilton’s University of Waikato, and her major is cello. She observed the Tian Guo Marching Band while they practiced before the parade. She said, “I especially like the pieces they play. Their performances are very good.”

She knew that the band members were Falun Dafa practitioners and said, “I know that the CCP (Chinese Communist Party) persecutes Falun Dafa, and even harvests their organs. This is really scary. What I cannot believe is that in the face of such cruelty, people are so indifferent. The CCP is really crazy to the extreme but many countries aren’t doing anything. This may be because they feel that this matter does not affect them so they shut their eyes. This is so wrong. They should stand up and say something so more people will know about this. I told some of my friends and they were alarmed. Most of them knew nothing about it. This is really sad. The most important thing is to let more and more people know about the truth.”

Twila said, “Practitioners did a great job and they put in a lot of effort. My mother found the Epoch Times website herself, and she reads it for news updates. She loves the Epoch Times as they report true news while many of the mainstream media are only expressing their own opinions. They only report what they want to report. This makes them lose their credibility.” 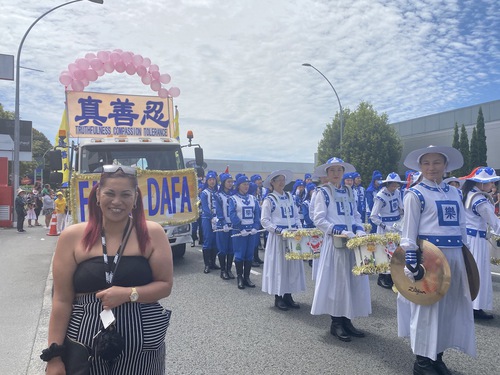 Rona McLeod is a local Maori lady. She and her son both love Chinese culture, so they were very happy when they saw the practitioners' parade group. When they learned that they were are all Falun Dafa practitioners who meditate and cultivate themselves according to the principles, “Truthfulness, Compassion, and Tolerance,” she happily said, “If everyone were to practice ‘Truthfulness, Compassion, and Tolerance’ in their daily lives, what a wonderful thing it would be. These are the true universal values, and it is the standard that everyone should reference. Although these three words may seem simple, they are actually not easy to be achieved, especially ‘Tolerance’. However, tolerance can allow one to not be controlled by emotions, thus allowing one to achieve truthfulness and kindness.

“Through these Falun Dafa practitioners, I see the traditional values of the Chinese people and these values should be learned by people from all ethnic groups. This is a healthy and positive lifestyle.”

Talking about the CCP regime, Rona McLeod sighed and said, “China has been isolated by western countries because it is a dictatorship. People can clearly differentiate between good and bad. Therefore, what I want to say to the people in China: ‘Hold on to your values and end the CCP’s dictatorship!’” 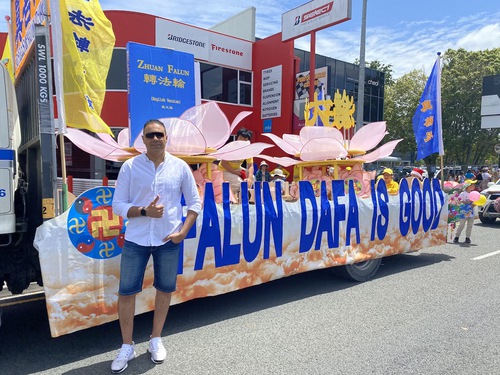 Amir migrated to New Zealand from Turkey and he is the manager of a company. He liked the Tian Guo Marching Band very much and said admiringly, “They are so unique and their organization is very good. Their traditional uniforms display the Chinese culture very well. Very good! Chinese people should pass on their traditional culture in this way. I like ‘Truthfulness, Compassion and Tolerance’, especially ‘Compassion’. Not only do we want to display ‘Compassion’, we should all practice it in our daily lives. This is very important.”

Chinese people also sent their well wishes to Falun Dafa practitioners. An elderly Chinese who moved to New Zealand 26 years ago said, “New Zealand gives its people the freedom to believe. It is very good that Falun Dafa is here. I support them! You see, their uniforms are so tidy and are very beautiful. The Chinese people in New Zealand should feel proud to have them here.”

Some of the Chinese people who left China said frankly that many of them chose to immigrate overseas because they are not happy with the CCP's dictatorship. One Chinese said she hopes that Falun Dafa will be practiced all over New Zealand.

“Looking Inside When Facing Problems”