(Minghui.org) On Human Rights Day, December 10, more than 900 current and former ministers and parliament members in 35 countries and regions signed a joint statement urging the Chinese Communist Party (CCP) to stop its brutal persecution of Falun Gong. The lawmakers praised Falun Gong practitioners' peaceful efforts to resist the persecution that has been going on for 21 years.

Initiated by Canadian Parliament Members Peter Kent and Judy Sgro as well as Swedish Parliament Member Ann-Sofie Alm, this joint statement was launched on July 20. “The persecution of Falun Gong in China has been one of the harshest campaigns against a faith group in modern times,” wrote the statement. 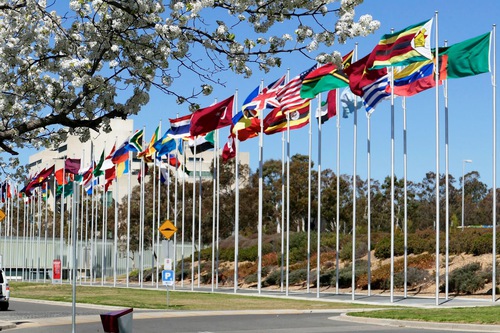 More than 900 lawmakers in 35 countries and regions have signed a joint statement calling for an end of the persecution against Falun Gong in China. The above picture is a display of international flags on the southern shore of Lake Burley Griffin in Canberra, capital of Australia.

Falun Gong, also known as Falun Dafa, is a meditation system based on the principles of Truthfulness-Compassion-Forbearance. Since the CCP launched a nationwide campaign against the practice in July 1999, a large number of practitioners have been arrested, detained, imprisoned, and tortured. Some of them have become victims of psychiatric abuse and forced organ harvesting.

These atrocities have been well documented by human rights organizations, governmental bodies, and the United Nations, said the statement. “We, the undersigned, therefore urge the Chinese government to respect international norms and the United Nations International Covenant on Civil and Political Rights which China is a signatory to, and to immediately stop the persecution of Falun Gong in China, and to unconditionally release all detained Falun Gong practitioners and other prisoners of conscience,” wrote the statement. 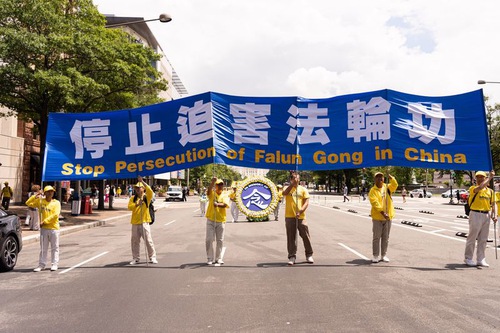 A banner from Falun Gong practitioners during a march in Washington D.C. on July 18, 2019.

Ewa Ernst-Dziedzic, Member of the Austrian National Council and the Human Rights Committee, wrote, “You can rest assured that I will continue to support you in reaching your goal to end the inhuman persecution of Falun Gong. I will not stop reminding Chinese leaders that the International Covenant on Civil and Political Rights also applies to authoritarian countries.”

Dr. H. Guspardi Gaus, a member of the House of Representatives in Indonesia, agrees. “These are humans who are being slaughtered, something inhumane, something very barbaric. In my opinion therefore, a legal process must be undertaken to end it,” he wrote.

“I call on the international community to speak up more forcefully and more publicly in denouncing the Chinese government’s continuing state-sponsored denial of fundamental human rights,” remarked Kent, “We must continue to work and hope that China will one day respect the rule of law, freedom of speech, assembly, and religion; a day when the tenets of Falun Gong can be spoken aloud in Tiananmen Square: Truthfulness, Compassion, Tolerance.”