(Minghui.org) As the Chinese Communist Party's (CCP)’s evil nature and its human rights atrocities have been further exposed, more and more Australians, both average citizens and politicians alike, have begun to speak out publicly in support of Falun Gong and condemn the CCP’s human rights abuses.

Bernie Finn MP and David Limbrick MP from Victoria condemned the CCP’s persecution of Falun Gong during their speeches at the Victorian Legislative Council in mid-November 2020. 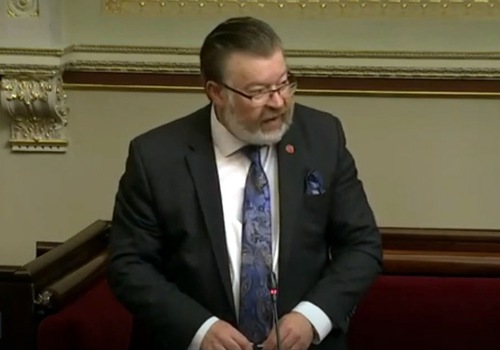 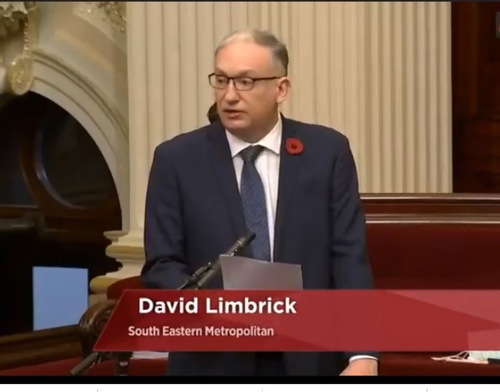 Mr. Limbrick is a parliamentarian in the state of Victoria, who always speaks up for Falun Gong and on China’s human rights issues.

In July this year, the Australian Broadcasting Corporation (ABC) broadcasted a program that grossly misrepresented Falun Gong. The Falun Dafa Association of Australia had contacted the ABC and questioned the content of the program before it went on air, and warned that such a program would exacerbate the persecution in communist China. Their concerns received no response from the ABC.

After the program was aired, Mr. Limbrick wrote an open letter to complain to ABC’s board of directors and expressed his views through other media outlets. He also wrote an appeal to the Australian Communications and Media Authority.

On November 11, during a speech at the Victorian Legislative Council, Limbrick described the ABC’s misrepresentation of Falun Gong as a “shameful” export of the CCP propaganda and said that it “repeated a number of Chinese Communist Party talking points.”

“If this program had referred to nearly any other religious minority in Australia, the producers would have been accused of hate crimes,” Limbrick said.

“I know many Falun Gong practitioners through my role as an MP,” he said, “They’re a peaceful group of people who courageously stand up against persecution from the Chinese Communist Party to practice their beliefs.”

“Falun Gong practitioners are all good people and very kind,” he said. “There are few governments in the world like the CCP that vilely persecute human rights.”

He was vilified by the CCP because of his open support for Falun Gong. “In fact, they (the CCP) created a web page about me and began to criticize me directly because I dared to defend freedom of religion,” Limbrick said during his speech when discussing a motion on trade with China in the Victorian State Parliament.

Since May of this year, the CCP has imposed a series of trade sanctions on Australian exports of barley, wine, coal, cotton, beef, timber, lobster and other products to China, and threatens that more Australian products would be sanctioned. Australia has been so targeted because it is one of the first Western countries to realize the CCP’s ambitions and banned Huawei from participating in its 5G construction in 2018.

In recent months, Australia continued to condemn the CCP’s human rights abuses in Hong Kong and Xinjiang, and passed legislation to ban foreign interference, including measures that could terminate the “Belt and Road” deal the Victoria State had made with the CCP regime earlier. Australia took the lead in the international community in calling for an independent investigation into the origin of the virus infection, which triggered a series of CCP’s aggressive trade retaliation. Clearly, the CCP is trying to pressure Australia to make concessions on key issues, but with little effect so far.

Victorian Legislative Council Member Bernie Finn congratulated Limbrick “on his contribution” and expressed his own support for Falun Gong.

“I too have had a great deal to do with Falun Gong practitioners and their associated supporters over a number of years, and they are good people,” Finn said. “They are very good people. They do not deserve the persecution and they do not deserve the treatment that they have received from the barbarians in Beijing, and that is the flat-out truth.”

“I would say most certainly – there are very few governments in the world that are more involved in the violation of human rights than the Chinese communist government,” he continued.

Regarding the trade sanctions imposed by the CCP on Australia, he said,  “We must find new markets. We must go out and go beyond our traditional practices. We must find these markets. We cannot rely on China.”

“China has shown over recent times that it cannot be relied upon for trade—or for anything else for that matter. We have to find new markets. We have to go out beyond what we have traditionally done and find those markets. They are out there. We need to do that because, as I say, we just cannot rely on China.”

Bernie Finn also expressed, “I do not want in any way, shape or form my children or my grandchildren being controlled by the Chinese Communist Party, and that is my very deep concern.”

“I do not want our future owned by the Chinese Communist Party. That is not an option.”

Prime Minister of Australia: We Make Our Own Decisions According to the National Interests

On November 17, Australian Prime Minister Scott Morrison and the new Japanese Prime Minister Yoshihide Suga reached a historic defense agreement in Tokyo, which had been in discussion for six years. The next day, the CCP’s embassy in Canberra sent a list of 14 complaints to a number of Australian media outlets (Nine News, The Sydney Morning Herald, The Age, etc.) and accused Australia of “poisoning bilateral relations.”

The list of 14 complaints accused the Morrison government of attempting “to torpedo” Victoria’s “Belt & Road” deal and blamed Canberra for “unfriendly or antagonistic” reports on China by independent Australian media. The listed complaints also include: government funding for “anti-China” research at the Australian Strategic Policy Institute, raids on Chinese journalists and academic visa cancellations, “spearheading a crusade” in multilateral forums on China’s affairs in Taiwan, Hong Kong, and Xinjiang, calling for an independent investigation into the origins of COVID-19, banning Huawei from the 5G network in 2018 and blocking 10 Chinese foreign investment deals across infrastructure, agriculture and animal husbandry sectors.

Australian Prime Minister Scott Morrison pushed back against the CCP’s list of “grievances” on November 19 after returning to Australia from Japan, “That’s nonsense” he told the Seven Network. “Australia is a sovereign country. We make our own decisions according to our national interests.”

“We stand up with other countries, whether it be on human rights issues or things that are carrying on around the world including in China, and we will continue to do that in accordance with our values.”

“If this is the cause for tension in that relationship, then it would seem that the tension is that Australia is just being Australia,” the prime minister said. “I can assure you that we will always be Australia and act in accordance with our interests and values.”

After the CCP’s list of complaints about the Australian government was disclosed, Human Rights Watch Australia Director Elaine Pearson said in an interview with media on November 18, “China [the CCP] is acting as a threat to human rights globally.”

Ms. Pearson told Sky News that “China [the CCP regime] is a very serious human rights violator. It’s committing mass atrocities, from Xinjiang to dismantling democracy in Hong Kong, and I think Australia and many governments around the world, quite rightly, are very concerned about those abuses and are taking steps to raise that concern publicly with China.”

She believes that now is the time for governments to really be taking a stand on the human rights issue in China. She said that the CCP government “has been committing these human rights abuses for many years inside China, with censorship and mass surveillance, locking up critics and lawyers and so on..., and now we even see the long arm of the CCP’s repression extending to countries like Australia, where we’ve seen interference in Australia’s political system, we’ve seen problems on university campuses”. In Australian universities, students who support Hong Kong’s democracy faced intimidation and threats.”

Pearson also said, “We should not let the Chinese government bully Australia and use economic clout as a means of getting appeasement or silence on human rights. Human rights are not negotiable.” “I don’t think human rights are something that should be traded away so we can sell more wine or beef.”

“Ultimately, the Chinese government is doing what’s in their national interest and Australia has to operate in our national interest, which is not just economic but is also about defending and protecting human rights and security,” she said.

Australian Parliamentarians: The CCP is like the Nazis, the mistake of appeasement should not be repeated

In view of the CCP’s poor human rights record, more than 160 human rights organizations wrote to the Chairman of the International Olympic Committee (IOC) in September this year, calling for a boycott of the 2022 Beijing Winter Olympics and requesting a new location for the Winter Olympics. Recently, a number of Australian federal MPs have also voiced their concerns and called on Australia to boycott the Winter Olympics to be held in Beijing in 2022.

Some MPs have warned the government to be wary of the similarities between today’s CCP and the rise of the German Nazis in history, saying that Australia should not repeat the big mistakes of the appeasement policy towards Germany during World War II.

Australian Senator Rex Patrick warned Australia not to repeat the mistakes in the past. “We should not repeat the experience of the 1936 Olympics, which showcased a totalitarian regime already on the path of territorial aggression. Our athletes, and our Australian flag, should not be used as stage props for a regime that in the shadow of the Olympic stadium commits genocide,” he told NCA NewsWire on November 16, 2020. “It would be morally wrong for Australia to participate in an event that will be used to legitimize the Chinese Government’s gross violations of human rights,” he said.

Senator Rex Patrick also wrote to the Senate Foreign Affairs, Defense and Trade Legislation Committee in October this year, calling on Australia to boycott the Beijing Winter Olympics on human rights grounds. He said, “human rights must come ahead of sports” and that, “the Chinese Communist regime's violations are on such an enormous scale that they cannot be ignored, downplayed or whitewashed.”

He said in the letter, “In particular, no-one would seriously suggest that the Chinese Olympic Committee is independent of Government influence when its membership is comprised entirely of Chinese Government officials and Chinese Communist Party members.”

“Like all institutions in China, the Chinese Olympic Committee is totally controlled by the Communist regime which is directly responsible for gross human rights violations (including I might add political hostage-taking and arbitrary detention of Australian citizens).”

“If the IOC (International Olympic Committee) were serious about enforcing the provisions of the Olympic Charter, China (CCP China) would not be a member,” he said. 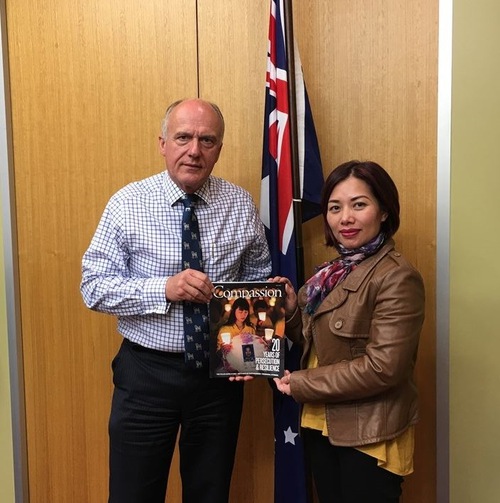 Australian Senator the Hon Eric Abetz has his photo taken with a Falun Gong practitioner in his office in the center of Hobart, the capital of Tasmania

Senator Eric Abetz told NCA NewsWire on November 16: “The similarities with the 1936 Olympics and the emerging 2022 (Winter) Olympics are too big (to ignore).”

“People were very happy with Germany rebuilding their economy, and as a result turned a blind eye to ‘alleged’ concentration camps and persecutions.”

“Truth-telling sometimes means setting diplomacy aside, whatever diplomacy means. You have to be upfront and call these things out,” he said.

Senator Abetz said that he would continue to speak out on human rights issues in China. He has also called to form an international coalition to counter the Chinese communist regime so that the CCP “would have nowhere to go.”

“Promoting the Goodness of Dafa In My Village”