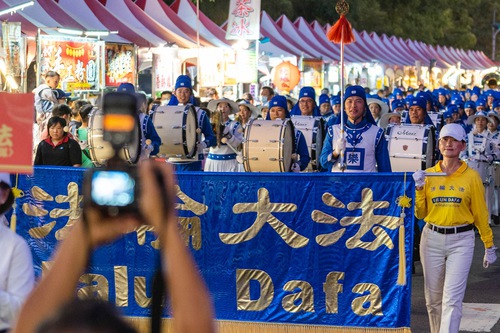 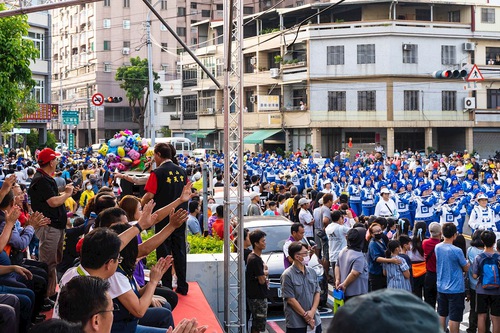 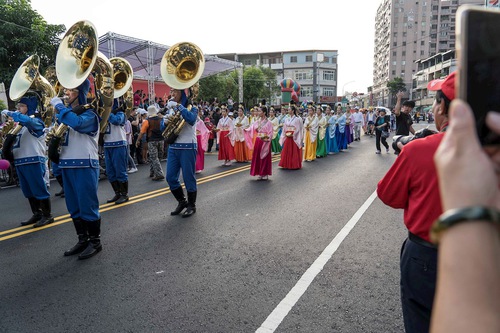 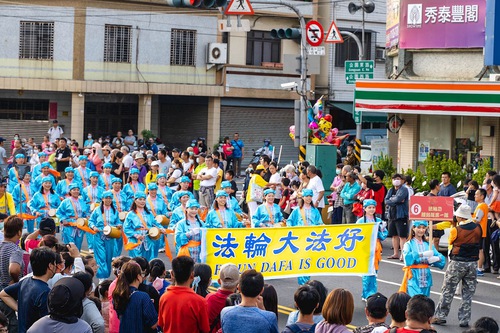 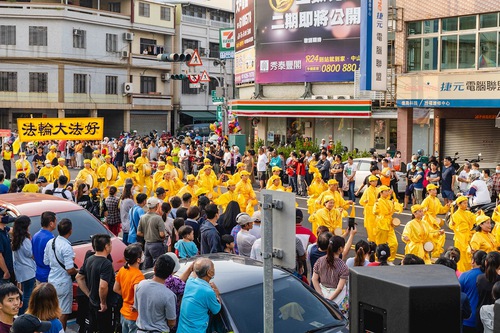 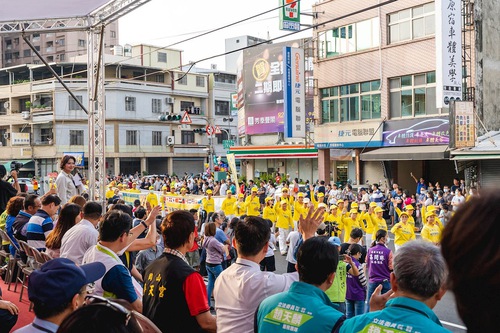 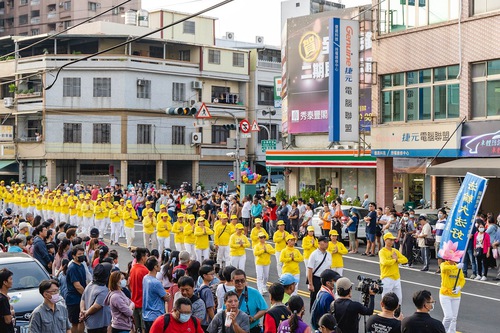 Practitioners' exercise demonstration was warmly received and several people asked where they could learn to practice.

The largest screw production area in Taiwan, the Gangshan district is known for its fastener industries and dominates one-sixth of the global fastener market. In conjunction with the local Shoutian Temple and Taiwan’s Ministry of Culture, the Kaohsiung City Tourism Bureau hosts the annual Gangshan International Cultural Festival. The event aims to promote local businesses and culture.

Event Organizer: Your Performance Has Won a Lot of Praise 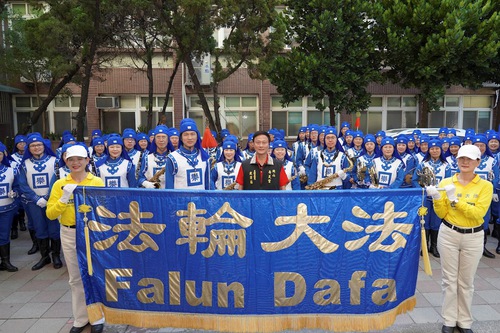 Mr. Dai Qingfu, organizer of the event, took a photo with Falun Dafa practitioners and thanked them for their participation.

This is the seventh year Falun Dafa practitioners were invited to participate in the festival. Mr. Dai Qingfu who organized the event said, “I am very glad and grateful that practitioners took part in the activities. Everyone looks energetic, your performance is always outstanding. Your group has won a lot of praise and applause.”

“Two Falun Dafa practitioners are part of our group of volunteers. They are kind and passionate, and always work hard without seeking any repayment. I am very impressed. This is the power of Falun Dafa. Their spirit is admirable.” 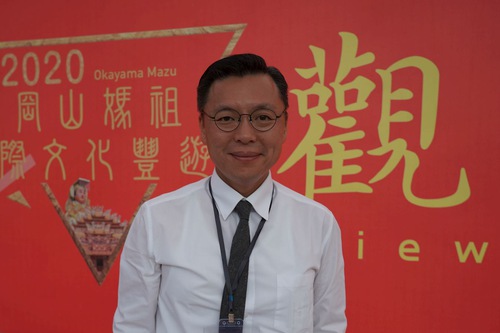 Mr. Chao Tien Lin who is a member of Taiwan’s Legislative Yuan has voiced his support for Falun Dafa on many occasions. He thanked practitioners for participating in the festival.

Mr. Chao Tien Lin, member of Taiwan’s Legislative Yuan, actively promotes social welfare and cultural activities. He has criticized China's persecution of Falun Dafa several times. He said, “In addition to improving one's physical health, Falun Dafa promotes traditional Chinese culture and arts. I have seen several performances by Shen Yun Performing Arts. Today I'm pleased to see so many practitioners participating. I admire your efforts at the grassroots level. You demonstrate how wonderful the practice is and showcase our profound cultural heritage.”

He praised practitioners' performances and said, “Every one of you perform in perfect synchrony. It shows how hard you have been practicing. I thank you on behalf of Kaohsiung city residents. I wish you all the best and thank you for participating in this event.” 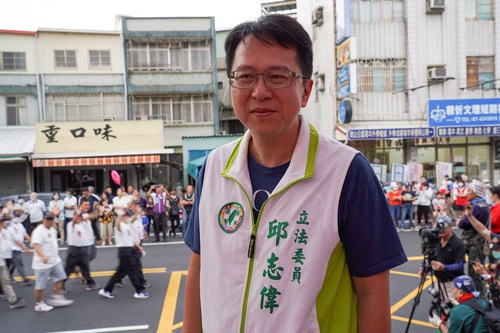 Chiu Chih-wei, a member of Taiwan’s Legislative Yuan thanked practitioners for participating in the festival. He hopes more people will learn about Falun Dafa.

Mr. Chiu Chih-wei, a member of Taiwan’s Legislative Yuan who serves on education and cultural committees said, “More than 100 groups from all parts of the island have come to participate in today’s event which takes place annually. Falun Dafa promotes high-quality cultural arts. I watch Shen Yun shows every year. I truly admire practitioners’ efforts in participating in local events.” 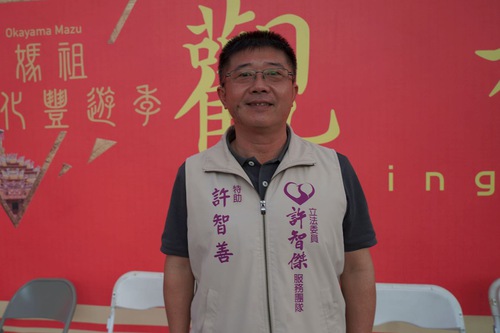 Hsu Chih-shan, special assistant to Hsu Chih-chieh, a member of Taiwan’s Legislative Yuan hopes Falun Dafa will flourish as it has contributed greatly to creating a more harmonious society.

Mr. Hsu Chih-chieh supports Falun Dafa but was unable to attend the event. His special assistant Hsu Chih-shan who came on his behalf said, “So many Falun Dafa practitioners have participated in today’s festival. You have worked hard and given a great performance. You warm people's hearts and bring them hope. I hope Falun Dafa will flourish as you have been a huge contribution in creating a more harmonious society.” 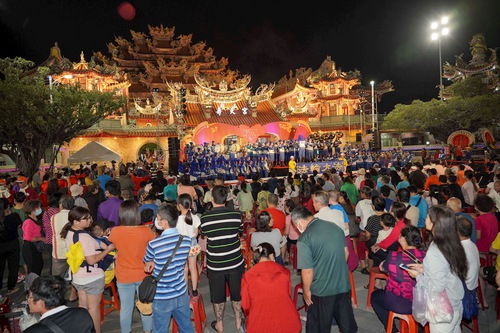 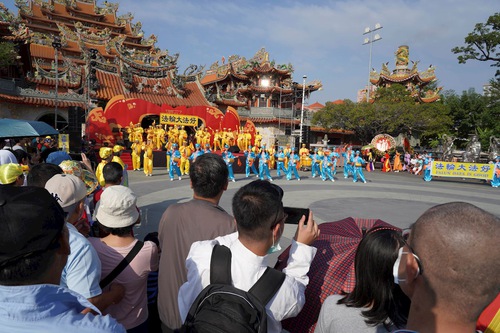 Ms. Pan has operated a food business in one of Gangshan district’s busiest streets for over two decades. When she recently began experiencing severe back pain her friend suggested she practice Falun Dafa. She watched the Tian Guo Marching Band’s performances and was moved. She got a practitioner's phone number and said she plans to go to the nearest practice site.

Ms. Zhu who is from a different part of the island was very impressed by practitioners’ performances in the parade. She said, “There are so many of you here today. Many people in Taiwan must be practicing Falun Dafa. Your steps are in sync, the costumes are bright and everyone is smiling. The music is upbeat, and I feel happy listening to it. Of the 100 groups here today, yours is the most outstanding.”

Ms. Lin who works in the air force participated in the parade. She told a practitioner: “Your marching band's performances over the years have deeply impressed people. You are highly skilled and disciplined, which must be the result of your practicing Falun Dafa. Every member plays their own instrument in harmony, you look peaceful yet vibrant. Everyone seems to be enjoying themselves. People feel energized just watching you perform!”