(Minghui.org) Today's news from China includes incidents of persecution that took place in 20 cities or counties in 11 provinces, where at least 42 practitioners were recently persecuted for their belief. 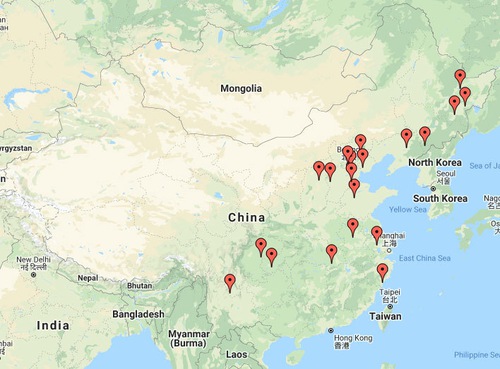 Ms. Zhao Huairong was given a one-year-and-six-month prison term and fined 20,000 yuan by the Chengde County Court on the morning of June 16, 2020.

She was taken to the No. 14 Ward, Shijiazhuang Women’s Prison on September 17, but her family was not notified. When her family called the Chengde County Court to inquire about her situation on September 25, they were told that the case was in the appeal phase.

Ms. Yi Qunying, Ms. Peng Xianzhi, Ms. Li Qiongying, Ms. Li’s husband, and three practitioners with the last names Yang, Tang, Liu, and another practitioner, whose name is unknown, were arrested when they were calling others to tell them the facts about Falun Gong on October 15, 2020.

Mr. Wang Fuguo in Mi County was arrested by the Yanbian County police in September 2020. He was released the next day. His case was turned over to the Procuratorate, and he was told to sign paperwork for it. He was accused of using a feudal belief and cult organization to sabotage law enforcement, a standard pretext used by the Chinese regime to persecute Falun Gong.

Ms. Zhang Weihong in the Panji District was arrested at home on October 10, 2020. It is not clear where she is being held.

Ms. Xu Qingmei from Feiyun Town was reported to the police for distributing cards with a QR code to access the Internet. She was arrested by Chen Zhao and other officers from the Rui’an City 610 Office at midnight on September 28, 2020.

Her home was ransacked and her Falun Dafa books, photos of the founder of Falun Gong, cards with the QR code, and paper bills with Falun Gong information printed on them were confiscated. She is being held in the Rui’an City Detention Center.

Mr. Sun Shiwei lives in Bamiantong Town, Muling City. His lawyer went to the Hailin City Court to submit the materials and review the case files. Judge Jiang Xinkun made things difficult for the lawyer, and prevented him from submitting the materials or reviewing the case files.

Ms. Yu Xiaofen and Mr. Luo Jianzhu, who live in the College Dongyuan Residential Community, were arrested by local Domestic Security officers on July 21 and August 13, 2020 respectively for distributing Falun Gong materials. They were taken to the Hutangjinhai Brainwashing Center. They have since returned home.

Ms. Su Deqin in the Langfang Development Zone was arrested at home by officers from the Huanqu Police Station on September 17, 2020. She was pressured to sign guarantee statements renouncing Falun Gong.

The officers wanted to take her to the police station and threatened her that if she did not go, they would handcuff her and take her away in front of her two grandchildren. They would prohibit the children from going to school, so that they would hate her.

Ms. Su’s husband was frightened and begged the officers not to handcuff and take her away. Ms. Su was worried that her two little grandchildren would be traumatized, so she went to the police station.

Ms. Su was told to sign the statements at the police station, which she refused. In the end, the officers told her husband to copy a guarantee. They grabbed Ms. Su's hand and pressed her fingerprints on it before letting her go home.

Four officers from the Tiexi Police Station went to Mr. Zhou Keming’s home, arrested him, and ransacked the place on the morning of October 12, 2020.

Officers from the Kuaida Town and a community member went to Ms. Tang Lili’s home at noon on October 16, 2020. They pressured her to sign the guarantee statements, which she refused. They threatened that if she did not sign, her subsistence allowance would be stopped. They told her son to sign. Ms. Tang did not allow him to sign the statement.

The police also went to Ms. Gao’s home and told her to sign, but she refused.

Ms. Li Xianglian and Ms. Qin Xia were arrested by officers from the Anqing Police Station on October 11, 2020. They failed to pass the physical examination and the Jiamusi Detention Center refused to accept them.

Ms. Lei Shengping suddenly lost contact with her family in late September 2020, and her whereabouts are unknown.

It was reported in early October that Ms. Lei was arrested and taken to the Chibi Detention Center. The 610 Office personnel not only failed to notify her family, but also went to her home to harass her family several times.

Mr. Li Weizong from Zhangqiu District was arrested while working in a refractory brick factory in early morning of October 14, 2020. He is being held in the Zouping County Detention Center.

The reason for arresting him this time is that on the afternoon of March 11, 2020, he distributed Falun Gong materials in Linchi Town. He was arrested by officers from the Linchi Town Police Station, and then released on bail.

Police assistants including Ouyang Zhancun from the Ciyutuo Town, Luanzhou City, went to Mr. Song Zuoqiang’s workplace in Xijie Village, harassed him, and photographed him on October 16, 2020. Mr. Song told them that personal beliefs are protected by law.

Ms. Zhang Guirong was arrested by officers from the Guanyinge Police Station at around 5 a.m. on October 15. She was given 15 days of detention and fined 1,000 yuan.

Mr. Cui Bin, an art teacher, was arrested on October 15, 2020. He was given a six-year prison term and held in Dongling Prison.

Ms. Zhang Xiaoqin in Fuling District was arrested on October 15, 2020. She was officially arrested on July 24.

Personnel from the Sihe Residential Community went to 76-year-old Ms. Gao Hongyun’s home and harassed her in early October 2020. They asked her if she still practiced Falun Gong. When she replied, “Yes,” they told her to sign the guarantee statements. She refused.

Residential community personnel in Xinhua District went to Mr. Ma Zhiyan’s home in Guangxin Residential Community and harassed him on October 13, 2020. Mr. Ma told them that practicing Falun Gong does not violate any laws.

Officers from the Gangnan Police Station went to Mr. Wang Shuquan’s home in Dongzhuhao Village in August 2020. Mr. Wang was not at home. The officers then instructed village officials to call Mr. Wang and photograph him. Mr. Wang refused to cooperate.