(Minghui.org) A hearing on the condition of human rights in China was held on November 18 in the Bundestag, the German Federal Parliament. Falun Dafa (also known as Falun Gong) practitioners as well as representatives from Xinjiang and Tibetan groups testified how the Chinese Communist Party (CCP) has been suppressing different beliefs in China. 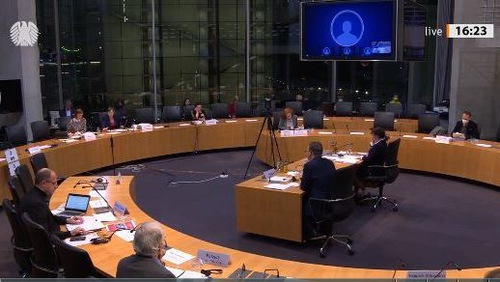 November 18 hearing in the German Federal Parliament, the Bundestag, to discuss human rights violations in China

The hearing was hosted by Gyde Jensen, chair of the Committee on Human Rights and Humanitarian Aid. Speakers talked about the widespread use of “thought transformation” in China. The CCP employed this technique widely in the persecution of Falun Gong and has since refined it and used it on other minority groups. 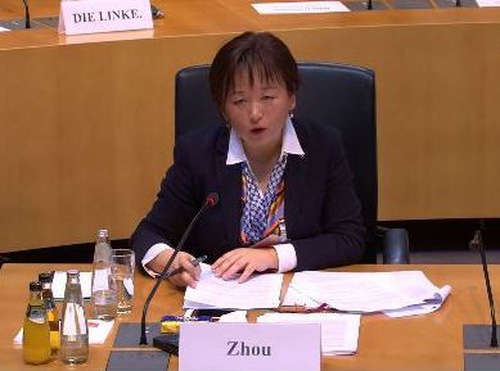 Zhou Lei from the German Falun Dafa Association spoke at the conference.

Zhou Lei, spokesperson for the German Falun Dafa Association and senior media professional, talked about how practitioners have been mistreated in China over the past 21 years. She said eliminating the CCP is the only way to fundamentally end the severe human rights abuses in China.

Besides prisons and detention centers, brainwashing centers have been set up in virtually every city and town across China, said Zhou. Although these facilities may be labeled “law education center,” “drug rehabilitation center,” or “career training school,” these brainwashing centers are extralegal entities invented to force Falun Gong practitioners to give up their belief in the principles of Truthfulness, Compassion, and Forbearance.

The nationwide persecution was launched by former CCP leader Jiang Zemin and implemented through 610 Offices at all levels. The first brainwashing centers were established in 2001. Without having to follow any legal procedures, the authorities can detain dissidents such as Falun Gong practitioners, Christians, and Muslims in these places until they sign statements to renounce their belief.

Many methods of torture are used in the brainwashing centers, including beating, force-feeding, forcing the victim to remain in a painful position for a long time, shocking sensitive parts in the body with electric batons, waterboarding, suffocation, solitary confinement, and sex abuse. According to information obtained from the Falun Dafa Information Center, over 4,500 people are confirmed to have died as a result of the persecution. That number does not include those who are missing or who died as a result of forced organ harvesting.

Wenzel Michalski, the director of Human Rights Watch in Germany, said brainwashing by the CCP of Muslims is oppressive. Simply for praying, some have been jailed for many years. Inside brainwashing centers, detainees are forced to learn Chinese characters and sing pro-CCP songs. Any religious activities are immediately punished.

Adrian Zenz, an anthropologist and renowned scholar who studies labor camps in Xinjiang, said the CCP seeks absolute control over its people. This includes where a person can live, what to say, how long to spend in the restroom, when to cry, how to think, and when they will be electrically shocked.

Kai Müller, Executive Director of the International Campaign for Tibet, stated that the CCP dispatched up to 10,000 officers to Tibet, ostensibly to “make friends” with the locals. In reality, however, their goal was censorship and control of the region. As a result, Tibetan Buddhism now has to bow to communist ideology, the Tibetan language is considered slang, and religious leaders are appointed by CCP authorities.

No Tolerance of Belief Systems

One question asked during the hearing was the possibility of political reform by the CCP that would allow freedom of belief. Zhou said there is no evidence this would happen due to communist ideology.

More specifically, communism advocates destroying the existing system and its values, which, in China, meant its rich traditions built up over five thousand years, such as Buddhism, Taoism, and Confucianism that promote virtue and self-improvement. To impose its core values of violence and hatred, the CCP launched numerous nationwide campaigns to suppress traditional Chinese culture and religions.

As a result, freedom of speech and freedom of belief rarely exist in China. All religions have to follow the Party line ideologically. Falun Gong practitioners strive to improve their minds and bodies by doing the five Falun Gong exercises and living by Truthfulness-Compassion-Forbearance. When Falun Gong became popular over 20 years ago, the CCP deemed it a threat and launched a nationwide campaign to stamp it out in July 1999. The persecution remains unabated to this day.

Zhou pointed out that condemnation of the CCP's human rights violations by the international community is critical. In the past few years, the CCP had ended the labor camp system and released some prisoners of conscience due to pressure from Western countries. But the severe human rights abuses in China—a nightmare that has lasted over 70 years—is far from over.

In the past several decades, Western countries have helped China in many ways to boost its economy, hoping that would lead to political openness and reform. But under the rule of the totalitarian CCP, as we are seeing now, a strong China only means more powerful censorship, more comprehensive disinformation, and ever-expanding communist influence all over the world.

In the past few months, in particular, the CCP has stepped up its smear campaign against Western countries and officials. Zhou hoped the German parliament would investigate this issue. One of the most effective approaches is sanctioning companies and individuals involved in the human rights abuses in China.

Müller agreed that criticism of the CCP alone is not enough. High-ranking CCP officials, such as those responsible for the deteriorating conditions in Tibet, should be held accountable.

“The Troublesome Vendor Left - My Understanding of the 2020 U.S. Election”