New Zealand: Celebration Held to Congratulate the 360 Million People Who Have Quit the CCP

(Minghui.org) Falun Dafa practitioners in Auckland, New Zealand held an event in Northcote on November 14, 2020 to celebrate the milestone of 360 million people renouncing their current and former memberships in the Chinese Communist Party (CCP) and its youth organizations.

The event hosts talked about the CCP’s history of killing in the series of political campaigns it has carried out since it took power in 1949, causing the deaths of 80 million Chinese people. In July 1999, it launched the persecution of Falun Dafa practitioners. Millions were arrested, and many were put into labor camps, tortured, and even killed for organs. 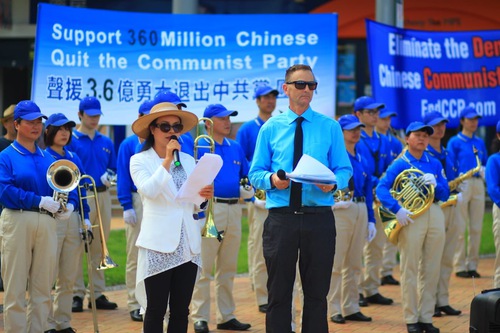 The event hosts talk about the CCP’s history of killing. 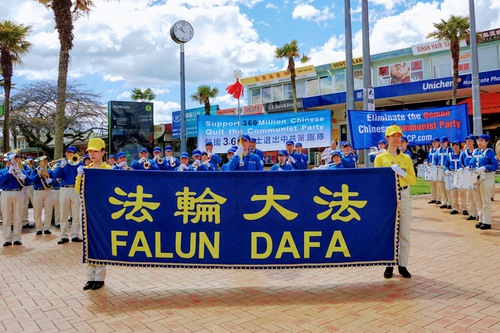 The Tian Guo Marching Band performs during the event. 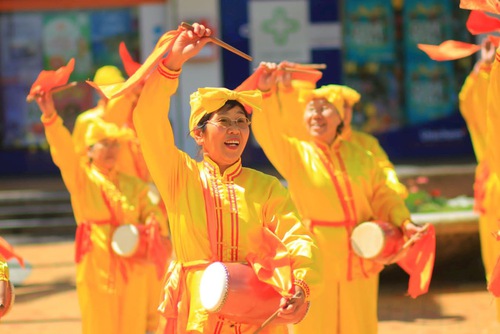 Waist drummers perform during the event. 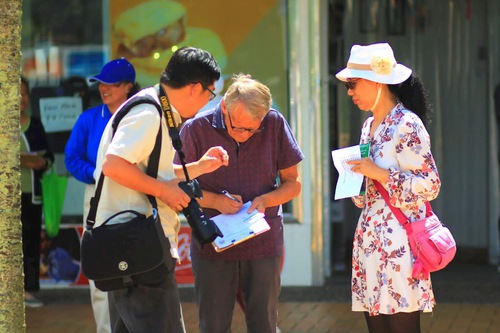 People sign a petition supporting the movement to quit the CCP. 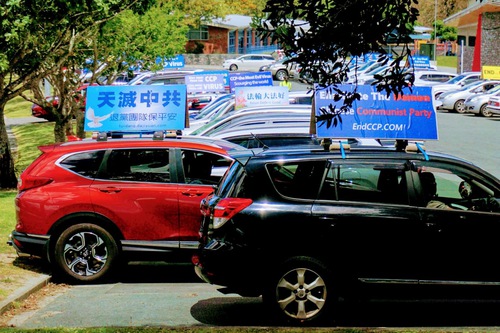 Parade of cars with “End the CCP” messages and information about Falun Dafa prepare to depart.

Falun Dafa practitioner Huang Guohua addressed the rally and described how he was tortured by the CCP for his faith. His pregnant wife was persecuted to death because she practiced Falun Dafa. She was tortured so severely that she became deformed.

Writer: The CCP Will Be Liquidated 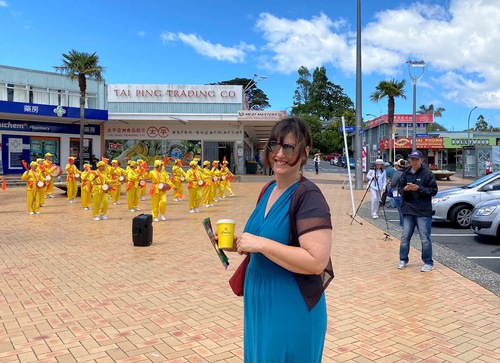 Leah said the free world is in a spiritual battle with the CCP.

Leah, a writer, said she loves the waist drum team’s costumes and performance. “They look beautiful. They can practice freely in New Zealand. I think they love China and its history. They only want to have the freedom New Zealanders enjoy and live in a peaceful environment.”

She added, “Theoretically, everyone is equal in China. But greed is one of the human weaknesses, especially when the authorities have certain powers. We are in a spiritual battle with the CCP. The CCP and its leaders are tools used by Satan and will be liquidated.”

Leah’s mother said her son was a teacher in China in 2013. He said that policemen and video cameras were everywhere. He and other Western teachers avoided the police and tried not to be recorded by the cameras. “Too many policemen,” she said, “I realized from his experience that we live in a better country.” 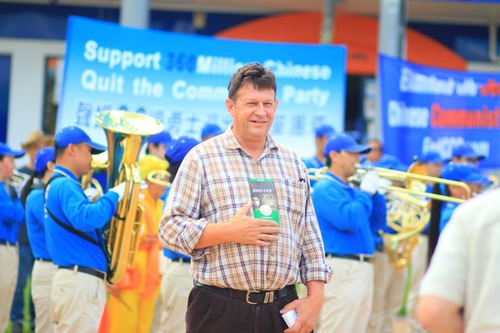 Norm Clark married a Chinese woman six years ago and said he understands how the CCP brainwashes people. “The CCP exports its lies to the world,” he said. “It sets a trap for the world. I watch China news closely. The CCP expelled many foreign reporters from China.”

“The CCP harvests organs from living Falun Dafa practitioners. I am very angry with the CCP. Now it harasses Hong Kong people and tries to invade Taiwan by force. But people in Taiwan don’t want to lose their democracy and freedom.”

He said the New Zealand government should resist the CCP because human rights should be prioritized above trade agreements. He said, “Money is not important. People are more important. The CCP will not give you freedom. I know they want to take Taiwan and threaten India by force. If they get it, they will occupy their surrounding countries slowly and eventually the entire world. This is their plan.”

Chinese: China Won’t Have Hope Until the CCP Perishes

Bella, a Chinese, said, “Everyone knows the CCP is evil. The CCP doesn’t serve the people. It only serves itself. Chinese people are its slaves. In New Zealand, government officials ask, 'What can I do for you?’ There are no elections in China. Chinese people don’t understand why their lives are so hard. There's so much pressure—traffic, housing, work and getting a degree. What does the CCP do for people?”

Referring to the CCP’s persecution of Falun Dafa, she said, “It is inhumane. There is no freedom of belief in China.”

“I am a history teacher. I look at society and the country from a historic point of view. I don’t think there is any hope for China. That’s why I chose to live overseas. The CCP rewrote the history books. If you teach China's true history, you will be arrested. Many history professors have been imprisoned. Communists oppress, attack, harm and kill people. Communism is an anti-humanity organization. This is a war between the righteous and evil. Only when the CCP perishes will China have hope.”