The article recounted the persecution Mr. Guo went through in China for practicing Falun Gong and some insights into his life in Germany. 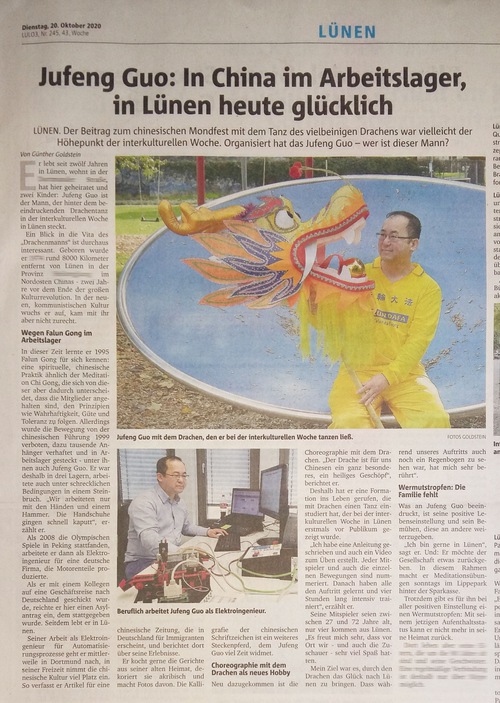 The report said Mr. Guo had lived in Germany for 12 years but was born about 8,000 kilometers from Lünen in northeastern China two years before the end of the Cultural Revolution. “He grew up in the new communist culture, but he didn't get along with it.”

In 1995, Mr. Guo learned Falun Gong. It was an energy exercise that included meditation, but it was different from other energy exercises in that Falun Gong practitioners follow the principles of Truthfulness-Compassion-Forbearance.

In 1999, the Chinese regime launched the nationwide persecution of Falun Gong and threw thousands of practitioners into labor camps. Mr. Guo was thrown into a labor camp three times and forced to work in horrific conditions in a quarry. Mr. Guo told the reporter, “We worked with hammers and our hands. Our gloves were broken quickly.”

When the Olympic Games were held in China in 2008, Mr. Guo worked for a German company. He went to Germany on a business trip and never went back to China. He is now an electrical engineer in Germany and devotes himself to Chinese culture in his spare time. He has published articles about his experiences in Germany in Chinese-language newspapers. He also writes Chinese calligraphy and shares pictures of his hometown-style cooking. 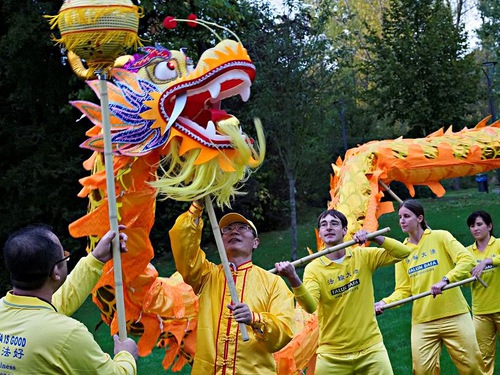 The article explained how Mr. Guo choreographed the dragon dance by studying dragon dances in detail so that he could present an accurate one to the audience during International Culture Week. “The dragon is very special to Chinese. It’s a holy being. I made a training document and corresponding video tutorials. Every dancer and movement was assigned a number. We spent a lot of time studying and practicing,” Mr. Guo told Ruhr News.

“I’m happy to bring joy to our audience. My goal with the dragon dance is to bring good luck to Lünen. I was so touched when I saw a rainbow during our performance,” Mr. Guo said.

Mr. Guo enjoys living in Lünen and doing the Falun Gong exercises in the park with other practitioners every Sunday. He misses his family and his hometown in China because he hasn’t been able to visit in 12 years, but he hopes he will be able to return home one day to a better China.