(Minghui.org) A school principal's son was very addicted to games. One day the principal found his son was still playing games after 10 p.m. He grabbed his son’s cellphone and threw it on the floor.

The principal said that the cellphone made his child lonely and isolated from other people. It was like his son lived in his own world.

Another father said that his daughter became more materialistic after she started watching TV shows on her cellphone. She asked why her parents were not rich and why they didn’t buy a luxury house in Shanghai.

Cellphones and games have invaded our lives and occupy too much of our time. They have severely affected our family relationships. Statistics suggest that more than 800 million people in China spend an average of 110 minutes a day watching short videos on their cellphones. About 15 percent of new Internet users are short video viewers. More than 100 million people in China play online games for about 30 minutes every day on average. Students and middle-aged white-collar workers are the most frequent users. That is to say, once people become addicted to games in their childhood, they continue playing games right into middle age.

Nowadays children come into contact with cellphones earlier than ever before. Some parents pass cellphones to their infants when they start crying. If these children rely on cellphones from such an early age, how will they possibly give up the habit when they grow up? Many parents have no way to help their children drop this habit.

This type of addiction will control and manipulate people. They are not able to break free from it. It corrupts people’s thoughts and is like a spiritual opium. The Chinese Communist Party (CCP) regards online games as a big industry and encourages its development. Someone said: “Everyone plays games and has no time to think of other things. This is exactly what the CCP wants.”

Sophia from Greece became addicted to computer games in 2004. She sometimes played for 16 hours straight. She later came across Falun Dafa and started to practice it. But the thought to play games still lingered in her mind. She started playing games again in 2013 but was not as addicted as before.

“Gradually, I found those games were very weird,” she said, “I could hardly sit 30 minutes in front of the computer. My eyes became painful as soon as I started playing the games and I felt nauseous. I finally decided to quit playing games. I have felt happy since then.”

Falun Dafa helped Sophia find a new self. She became healthy again and restored connections with her family members whom she hadn’t had any contact with for a long time. She felt fortunate to become a Falun Dafa practitioner. “Falun Dafa is a diamond in this chaotic world,” she said, “It is very precious.” 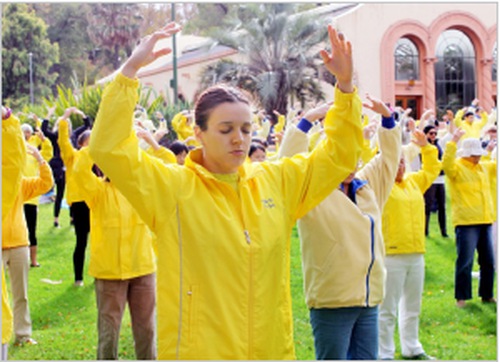 Sophia practices the Falun Dafa exercises with other practitioners

Michael Wang, 10, attended a summer camp held by the Toronto Minghui School in 2018. The school emphasized to the children that students should not play computer games.

“I completely quit games last year. My mom kept telling me not to play games. I knew it was not good for me because I was hot-tempered every time I finished playing. I couldn’t control myself and intended to do something bad, like stealing or fighting with others. I didn’t want to be controlled by demons so I made up my mind to quit.”

“It was difficult at the beginning. I went out to the square when I wanted to play games and took a walk or jog there. I didn’t come home until I was no longer so upset. I did this for two weeks before I quit the games. I felt relaxed and didn’t lose my temper as easily. My parents said that I became a good boy.” 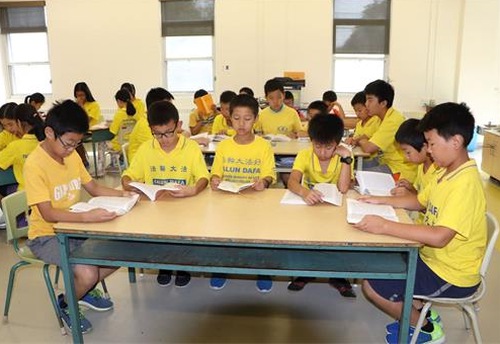 “My mom said that it was not good to play games, so I quit,” he said, “I was in grade four at a public school. The students could play games on school computers during the lunch break. One day I played for 10 minutes and I had a headache. I felt dizzy, hot, and sweaty. I haven’t played games since. The students at Minghui School don’t play games so I don’t want to play.” 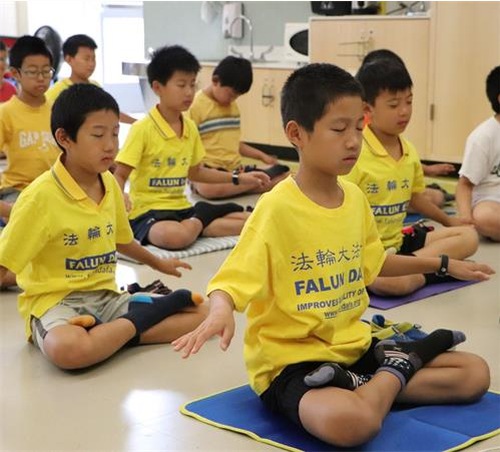 Playing games becomes an addiction and is also an attachment. Demonic elements are behind it. It is harmful to the mind and physical health. A Falun Dafa practitioner told her son: “The figures in the games are also beings, though they are virtual. If you kill them, they will come to you for the debts you owe to them. You have to pay them back after you commit karma.” Her son quit playing games and now practices the Falun Dafa exercises and studies the Fa in his spare time. He asked his mom to set up passwords on the computer and cellphones so that he could not use them. He is very strict with himself. He does his homework when his mom is not home. He does not need to be monitored.

Zheng Xing, 30, is a Falun Dafa practitioner. He started to practice Falun Dafa with his father when he was little. His teachers and other adults thought he was an honest and kind child and that he took good care of his parents.

When he was in high school, he started going to an Internet bar to play computer games. His mother became worried about him and talked to him seriously about quitting computer games, but he didn’t listen to her. His grades at school dropped significantly. He continued to play games after he entered senior high school. He hardly studied the Fa or did the exercises. His academic performance dropped to the bottom of his class. His parents were very disappointed.

One day some practitioners shared their cultivation experiences at his home. When he listened to how they helped Master Li (Falun Dafa's founder) spread the truth about Dafa and the Fa and oppose the persecution and how they acted righteously, he was greatly moved. He found the gap between himself and the practitioners. He realized the urgency of cultivation in the Fa-rectification period and that he should cultivate seriously.

He became determined to give up playing games. He deleted the games apps from his computer and threw away all of his games on DVDs. He studied the Fa every day and his addiction to games weakened. He no longer cared when his classmates talked about games in front of him. He completely quit.

As he cultivated diligently, he became more clear-headed and smart. He could focus in class and studying became effortless for him. His academic scores improved rapidly. During the final exams one semester, he made such progress that he was awarded a prize.

Nowadays, gaming addiction is a big problem for many families. Many parents are not able to find a way to keep their children away from games. Only if the child wants to change from the bottom of their heart can they let go of the addiction. Any other method can not change a person’s mind.

The Minghui website published the article “Young Practitioner: Returning to Dafa as a Genuine Cultivator” in 2019.

This young practitioner began practicing Falun Dafa with her mother when she was four years old.

After she graduated from university, she became addicted to computer games. She played games every day for hours until the batteries ran out on her phone. She charged the phone while playing, until her fingers and eyes got really sore. She was so absorbed in the game that she didn't want to cook, do any chores, or even sleep.

She knew it wasn't right, but she couldn't control herself. At night, she even dreamed about playing mobile games and couldn't rest properly. During the day, she hallucinated; when she heard the sound of cars, she thought it was the enemy driving, and when she saw airplanes fly by, she felt that the airborne bag in the game was coming. She realized that she couldn't continue like that anymore, so she decided to quit. But it was extremely difficult. She deleted the app, but downloaded it again, and this process repeated many times. She couldn't completely quit.

She became pregnant at the age of 25 but had a miscarriage. This blow made her reevaluate her life. Laying on the hospital bed, she remembered Dafa and Master. She began listening to Dafa music. After some time, she started to cry. She regretted all the time that she had wasted for so many years. She understood that only Dafa could change her current state.

Having gone through all these experiences, she decided to genuinely practice cultivation. She could not let the opportunity slip by again.

Two months after returning to cultivation, she found that she was no longer strongly addicted to games, and she didn't want to touch them at all. She watched her husband continue to indulge in them, but she had no more desire to. Now that she thought of it, it was because she was after the pursuit of stimulation and curiosity. The games promoted violence and made her think about her gains when killing people. It filled her brain with selfishness, violence, and evil thoughts. It took up a lot of valuable time and made her life a mess. She should have never played them in the first place.

Fleeing from a Devil’s Cave

The Minghui website published an article titled “How I Got Rid of My Attachment to Playing Computer Games.” I quoted some paragraphs from the article here.

For many years, I was hooked on computer games. My attachment to them was so strong that even after I began practicing Falun Dafa, I was not able to let go of it.

Whenever I finished studying the Fa, my first thought was to take a break and play a few games. However, once I began I would not stop until several hours had passed. Afterward, I was exhausted and would take a nap for a few hours.

I thus wasted the whole day. Sometimes I told myself I had no time to read the Fa, and I instead wasted time playing computer games before going to bed.

One day I suddenly had a stomachache while playing games. I was in such pain I was forced to take a break. Immediately the pain subsided. After a brief rest, I got up to play again. However as soon as I switched on the computer, I felt as if someone had punched me hard in the stomach and the pain returned. I slept for a while. When I woke up, I felt better and I looked at the computer. As soon as I had the thought of playing computer games, the discomfort came back.

This went on for several weeks. Finally, I went to the hospital for a checkup, but there was nothing wrong with me. I still felt terrible. Meanwhile, I stopped playing computer games. I did not feel a strong urge to play anymore. Instead of playing games, I watched Master's lectures. I wept as I watched them. Master's compassion made me realize how serious cultivation practice is. I finally realized that Master was trying to help me get rid of my addiction to computer games.

My friends would invite me to play with them or ask me to give them tips on how to play a certain game. I answered their questions politely, but in my heart I told myself: “I am now a Falun Dafa practitioner. I cannot waste my time on this.” After a while, they left me alone.

As I look back, I feel extremely fortunate to have gotten rid of such a big addiction.

“A New Practitioner: Cultivating Myself at Work”

“Kunming Woman Gets Four Years for Her Faith, Parents Die from Stress”