(Minghui.org) Today's news from China includes incidents of persecution that took place in 16 cities or counties in 8 provinces, where at least 46 practitioners were recently persecuted for their belief. 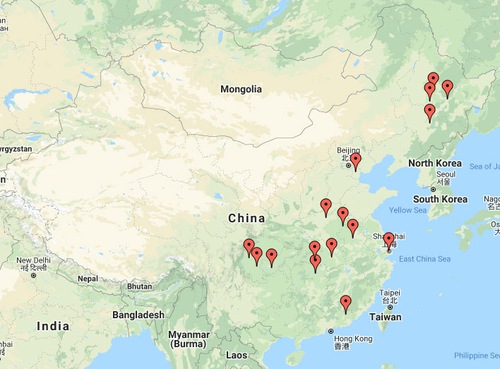 Three practitioners, Ms. Chen Shoumei, Ms. Zhang Xiuying and Ms. Zhang Guiyun from Tonghe County, were to face trial in the Yilan County Court on the afternoon of November 10, 2020.

Ms. Ma Haiyun was arrested by officers from the Guoqing Road Police Station on the afternoon of October 23, 2020 for distributing truth-clarifying materials. Her home was ransacked and her cell phone and computer were taken away. Ms. Ma's case has been transferred to the Tianjia’an Police Department. She is now detained in the Huainan City Detention Center.

Mr. Xu Yanlin of Sandian Town was harassed at home by several agencies including the Sandian Police Station, the Political and Legal Affairs Committee, and the 610 Office. Mr. Xu suffered a stroke as a result, and was sent to hospital. The 3,000 yuan given to him by his son has been used up and he has no money to continue treatment.

Ms. Cao Xiurong received three phone calls from the Xingfu Community, Xinzhou District, ordering her to come in and sign a statement giving up Falun Gong.

The sister of Ms. Zhu Chunmei received a call on the afternoon of October 25, 2020 from the Qing’an Community, Xinzhou District requiring that Ms. Zhu Chunmei sign the statement. Community staff people have gone to the homes of her brother, her sister and her son to harass them multiple times. Moreover, the area around her home and even her parents’ home in her hometown have been under surveillance for a long time. Her pension was suspended as of this September.

Ms. Liu Cuiping was arrested on October 26, 2020 because of distributing truth-clarifying materials in the countryside. She was released later that day.

Her home was ransacked the next day, and a computer and color printer were taken away. Ms. Liu was arrested under the order of Liu Lifeng, head of the local 610 Office.

Her sister and the friends went to the detention house to visit her on the morning of October 30. They were not allowed to see her nor to leave her some clothing.

Ms. Han Zonglan was harassed at home on the morning of October 29, 2020 by staff from the Comprehensive Management Office of Dongcheng Street, as well as Li Xia, director of the Longcheng Community, and local police officers. They tried to force Ms. Han’s family members to copy the so-called “five statements,” (against Falun Gong), but were stopped by Ms. Han.

Three practitioners including Ms. Liu Bolian, Mr. Bi Xiangshu and Ms. Han Zonglan were harassed at their homes on September 17, 2020 by several people including Chen Shijin from the Chongqing Political and Legal Affairs Committee, Ye Maochuan from the Domestic Security Division of Tongliang District, two local police officers, and Yan Fang from the local community. They photographed the practitioners’ homes as well.

Ms. Zhang Lijun, Ms. Pang Chunmei, and Ms. Pang Minjun, practitioners in Pangzhuang Village, Chenzui Town of Wuqing District,were harassed at their homes on October 27, 2020 by village cadre Pang Xuewen. He tried to force them or their family members to sign a statement to give up Falun Gong practice, and also photographed their homes.

Pang Xuewen came to Ms. Pang Chunmei’s home again on October 29, 2020 while only 78-year-old Ms. Pang’s father was at home. He asked him if he still practiced Falun Gong, and photographed the old man. He also intended to have him sign the statement.

Their homes were ransacked from 3 p.m. to 8 or 9 p.m. that day. The police took away a total of 100,000 yuan in cash, computers, printers, truth-clarifying desk calendars, Dafa books, and other items.

Every practitioner was body-searched, photographed and videographed. The police took their blood samples and interrogated them at the Dongxing District Police Department. Four practitioners, He Li, Meng Kunling, Fu Tianlu, and Yu Ping, were sent to the Weiyuan County Detention Center on the afternoon of October 27. The rest, most of them over 70 or 80 years old, were released on bail and returned home.

Ms. Li Diying and Ms. Zhu Yueying were arrested at their respective homes around 8 p.m. on October 28, 2020, by more than ten police officers from the Yuanjiang Police Department. Their homes were ransacked. Ms. Zhu Yueying, 78 years old, was allowed to go home around midnight. Ms. Li Diying was placed under 15-day detention.

Ms. Deng Tianyu of the Shashi District was arrested by police from the Liberation Police Station on October 18, 2020. She was immediately sent to Shishou City for a 15-day isolation and will be sent back to Shashi City afterwards.

Ms. Chen Huiping and Ms. Niu Qingqing from Xiaoguan Village, Xiaoguan Town, were arrested by local police. Details are unknown as of yet.

Ms. Dai Juju has been harassed at her home once a month since August 2020 by Wu Xuezhou, a police officer from the Evergreen Garden Police Station in Dongxihu District. He took photos when he came.

Mr. Zhao Xu was harassed at his clinic on October 22, 2020, by Zhao Hongying, deputy director of Zhaizhuangzi Village and Xue Mingyin. They demanded that Mr. Zhao write the so-called “three statements” and threatened to arrest him if he refused to do so. Mr. Zhao firmly rejected their demand.

Mr. Li Yuancheng (69 years old) from Meijiang District was arrested on the evening of October 27, 2020. When the police came to ransack his home on October 28, they handcuffed his non-practitioner wife and ordered her not to talk.

Yu Jiguang (gender unknown) has been harassed multiple times recently. Officers from the Heping Road Police Station, Fenghua Community, the Shihua Street Residential Office, and an individual surnamed Han, in charge of the local building, kept coming to knock Yu’s apartment door, which Yu refused to open for them. They have recently started to intercept and photograph Yu when Yu goes out.

Ms. Xu Fengqing, 85 years old, lives in the Dunhua Community, Yangpu District. She received a phone call on September 30, 2020 and afterward, officers from the Yangji Police Station came to her home to harass her. Her daughter stopped the police from coming in.

80-year-old Ms. Jiang Yuefang in Yanji Village was harassed at home by local police and staff from the local resident street office.

The husband of Ms. Lai Bihua received at call from the Yongshang Township Police Station in Xinjin District on the afternoon of October 28, 2020. His aunt also received a harassing phone call. She called the couple and told them to go see the police and the village chief.

Ms. Li Yanbo was harassed at home on the afternoon of October 30, 2020 by two female staff members from the local community office. They ordered Ms. Li to attend a so-called “study group” and to sign a statement to give up Falun Gong practice. Ms. Li rejected them.

Ms. Lan Shufen was also harassed at home on the afternoon of October 28, 2020 by two staff members from the Lianhua Street Office. They ordered Ms. Lan to attend a brainwashing session. Ms. Lan didn’t go.

Ms. Jiang Yunchang of Lixin County was released from prison in June 2020. However, she has been continuously harassed by the local police, staff from the local community office, and local officials. They keep asking her mother about her, which has seriously disrupted her mother’s day-to-day life.

“Three Hebei Residents Have Been Detained for a Month, One in Serious Condition”