(Minghui.org) The U.S. Department of the Treasury announced on November 9 sanctions against four more Chinese Communist Party (CCP) and Hong Kong officials for threatening the freedom of Hong Kong.

Michael Pompeo, U.S. Secretary of State, confirmed the sanctions in a press release issued the same day. This is part of a continued effort by the U.S. government to curb the CCP’s damage to the free world. 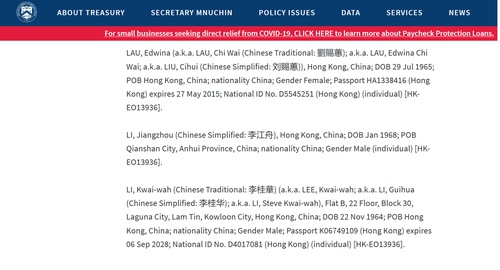 Names (both English and Chinese), birth dates, and passport numbers of these officials were also published on the Treasury Department website.

In a press release issued on November 9, Secretary of State Pompeo said these individuals would be barred from traveling to the U.S. Their assets within the jurisdiction of the U.S. would also be blocked.

“These actions underscore U.S. resolve to hold accountable key figures that are actively eviscerating the freedoms of the people of Hong Kong and undermining Hong Kong’s autonomy,” he explained. “The United States calls on Beijing to abide by international commitments it made in the Sino-British Joint Declaration, a UN-registered treaty.”

These officials have all been involved in the implementation of the repressive National Security Law in Hong Kong and suppressing protesters.

After Beijing passed a new law on November 11 that barred anyone from Hong Kong’s legislative council who supports Independence, four pro-democracy legislators were disqualified by the Hong Kong government within minutes. Shortly after that, the remaining 15 pro-democracy legislators said in a press that they would all resign the following day, reported The Guardian on November 11 in an article titled “Hong Kong opposition lawmakers all quit after four members ousted.”

Robert O’Brien, U.S. National Security Advisor, said this left no doubt that the CCP had “flagrantly” violated the commitment under the Sino-British Joint Declaration and its promise to the people of Hong Kong.

This led him to believe that “One Country, Two Systems” had become merely a “fig leaf covering for the CCP’s expanding one-party dictatorship in Hong Kong.”

“The United States will continue to utilize all the powers granted under the Hong Kong Human Rights and Democracy Act, the Hong Kong Autonomy Act, and the Executive Order on Hong Kong Normalization to identify and sanction those responsible for extinguishing Hong Kong’s freedom,” he added.

In the past few months, numerous actions have been taken by the U.S. government to counter the CCP.

After the CCP enacted the National Security Law in Hong Kong, U.S. President Donald Trump issued an Executive Order on Hong Kong Normalization on July 14. “I therefore determine that the situation with respect to Hong Kong, including recent actions taken by the PRC to fundamentally undermine Hong Kong’s autonomy, constitutes an unusual and extraordinary threat, which has its source in substantial part outside the United States, to the national security, foreign policy, and economy of the United States,” stated the order. “I hereby declare a national emergency with respect to that threat.”

According to the Hong Kong Autonomy Act, the U.S. Department of the Treasury imposed sanctions on 11 individuals for undermining Hong Kong’s autonomy, including Carrie Lam, current Chief Executive of Hong Kong.

“The United States stands with the people of Hong Kong and we will use our tools and authority to target those undermining their autonomy,” Secretary of the Treasury Steven Mnuchin remarked.

“The release of this report underscores our ongoing objection to Beijing’s actions that are intentionally designed to undermine the freedoms of the people of Hong Kong and impose the CCP’s oppressive policies,” stated the report.