(Minghui.org) Today's news from China includes incidents of persecution that took place in 29 cities or counties in 15 provinces, where at least 51 practitioners were recently persecuted for their belief. 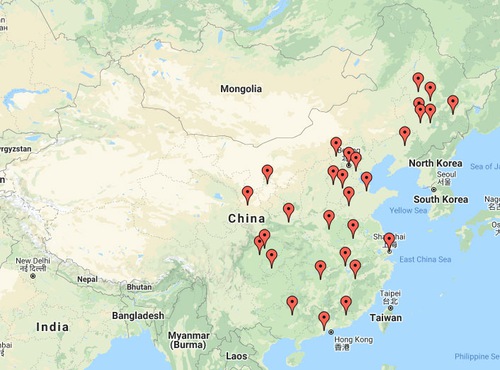 Ms. Li Fengzhi has been detained for one year and three months. She was tortured in the detention center, locked in a dark room and forced to wear shackles. Her mental state is worrisome.

On the morning of July 26, 2019, over 10 officers from Xiangshanlu Police Station and personnel from local residential community broke into Ms. Li's apartment and ransacked the place. They confiscated some Falun Gong books and materials. The officer interrogated Ms. Li about where she got these materials. Ms. Li refused to answer the question, and she has been detained since. She has been indicted, and her case was sent to Zhaolin District Court in December 2019.

Mr. Ai Guoxiang’s family was notified recently that he had been sentenced to more than 2 years by the Guixi City Court.

Ms. Liu Gaowen was summoned to Chengbei Police Station on October 16, 2020. Another practitioner, Ms. Yang Xuemei, was also there (she was arrested earlier that day). A policeman gave them their arrest warrant, printed in very small font, and told them to sign it. After the practitioners refused, the policeman signed it for them. The police then took the practitioners to Pengxi County Detention Center. Ms. Liu was found to have extremely high blood pressure and rejected admission. She was released that day. Ms. Yang remains in custody.

At around 9 a.m. on October 30, 2020, Ms. Zhao Lanfang was forcibly arrested and taken to Liutuan Police Station. The police ransacked her home, confiscated her Falun Gong books, banknotes printed with message about Falun Gong (a creative way to raise awareness about the persecution given the strict information censorship in China), a radio and some informational materials about Falun Gong. Ms. Zhao was put on criminal detention in the afternoon and taken to the Pudongxin District Detention Center.

Four practitioners who were arrested on July 15, 2020, including Ms. Zhang Xiuzhi, Lu Xiangfu, Feng Liqi, and Dong Ziuhui (under house arrest), recently had their cases submitted to the Dehui City Procuratorate by the police.

Ms. Zhang Huifang was arrested by officers from Nankai Domestic Security Office and Wanxing Police Station on March 30, 2020, and has been released on bail. Her home was ransacked. She received a notice from the procuratorate on October 21 that the police had submitted her case to them.

Ms. Hu Wenqiong died at the end of 2019 after being brutal tortured in the persecution. Her health deteriorated and she was on the verge of death several times.

Li Kaizhang, director of the local 610 Office, instructed policemen to arrest Ms. Hu and take her to Langzhong Detention Center several times. Guards beat, kicked and starved her, and they deprived her of sleep.

When she was detained at the No.2 Detention Center of Langzhong City, guard Zhao Tianxiang beat her at full strength with a rubber club until he was exhausted himself. He also tried to force her to sign a statement to renounce her belief. Ms. Hu was seriously injured. She had deep bruises on her legs, back and her hip, leaving her in tremendous pain while both sitting or lying down.

Zhao also instructed inmates to handcuff Ms. Hu from her back to torture her. The handcuffs were so tight that they cut into her wrists in a few minutes. Her hands were numb and turned purple. She almost passed out from the excruciating pain. The scars on her wrists were still visible a few years later.

Ms. Xu Rong'en was arrested on October 28, 2020, after she was found by a plainclothes officers for talking to people about Falun Gong at a local market. She was brought to local police department and released in the afternoon.

Mr. Li Zhigang and several other practitioners were arrested while studying the teachings of Falun Gong together on October 27.

Ms. Xu Jiayu was harassed several times earlier this year. On the morning of October 30, 2020, Ji Zhongxiang and several officers from Xincun Police Station came to Ms. Xu Jiayu's home again and asked if she still practiced Falun Gong, if any officers had come to collect her blood sample, whether she had a house in Minxing District, etc.

A practitioner surnamed Chen was harassed several times in the past few years by Zhang Shuhua and several staff members from the residential committee. They knocked on Chen’s door and attempted to force Chen to sign a statement to renounce Falun Gong. After Chen refused, the police called Chen’s son to intimidate him.

The authorities in Lingwu City have harassed local Falun Gong practitioners and attempted to force them to give up their faith. On the morning of October 25, An Peng, a policeman from Lingwu Farm Police Station, and Yan Xuebin from the local residential committee, led several officers and broke into Ms. Fang Yuqing's house and forced her to sign the statement. They threatened to ransack her home, arrest her, put her in jail, and suspend her pension.

On October 29, 2020, several officers from Yingshan Police Station and residential committee went to practitioner Liang Zhongcheng's home, but Liang was not home at the time. The officers returned the next day and asked if Liang still practiced Falun Gong.

Ms. Li Yixiu, 73, was arrested by policemen from the Mei County District Domestic Security Office. They ransacked her house and confiscated some of her Falun Gong books and materials, as well as cash.

Ms. Zhang Su’e was harassed at home on October 9 by government officials and Wang Lifeng, the accountant of Ximalin Village. They attempted to take her photos with their cellphones. One police officer and a village staff member harassed Ms. Zhang again on October 28, with the excuse of checking her household registration.

Also on October 28, Ms. Guo Xiulan was harassed. They officers attempted to take her photo and force her to sign a statement to renounce Falun Gong, but she refused.

In May, the personnel of a local company pressured their employees whose parents were Falun Gong practitioners in attempts to force these practitioners to give up their belief.

Meng Fandong, chairman of the worker's union, instructed the son of Ms. Li Xiuhua, in her 80s, to force his mother to give up her belief. The son made a voice recording of Ms. Li and submitted it to the union.

Meng Fandong also forced the daughter of Ms. Shang, in her 80s, to record her slandering Falun Gong. Ms. Shang’s husband stopped her.

The authorities also pressured the children of senior practitioners Zhang and Sun and asked them to persuade their parents to stop practicing Falun Dafa.

Practitioner Liu, around 70, has retired but also received phone calls from her former workplace telling her to renounce Falun Gong so that they could remove Liu’s name from their list of Falun Gong practitioners.

On October 22, Ms. Luan Guizhu was distributing calendars with information about Falun Gong and talking to people about it, when a person came over and grabbed her. That person identified himself as an agent of the 610 Office. He reported Ms. Luan to the police. Officers from Dongmenkou Police Station soon came and arrested Ms. Luan.

After she was taken to the station, the police interrogated took note of her name, address and phone number. Although the police released her around 11:30 pm, as her husband is bedridden and unable to take care himself, they ordered her to go back at 9 am the next morning.

Ms. Luan reported to the Dongmenkou Police Station on the next day and was taken to the Xinhualu Police Station. The police there asked for her personal information again, but she refused to answer their questions this time. Four officers ransacked her home and took away two copies of the calendars with information about Falun Gong.

On July 15, six practitioners, including Huang Xingyao, Li Meiqiong, Li Chuntao, Chen Yinhao, Lu Weiwen, and Lan, were arrested and had their homes ransacked on the same day.

Among them, Huang Xingyao, Li Meiqiong, Li Chuntao and Chen Yinhao were released on the same day, while the situation of Lu Weiwen and Lan remains unclear.

Ms. Yao Shuxia’s family lost contact with her on October 29. Her apartment was ransacked, and her Falun Gong books and a photo of Falun Gong’s founder were confiscated.

Ms. Ma Yunhua, 70, was taken to the Shaanxi Province Women’s Prison on July 30, 2020, to serve a nine-year term for her faith. She is currently detained in the No.8 Division.

Ms. Su Xiuying, 48, was arrested at home on October 19, 2020, by the police and Pang Wenhai, the Communist Party Secretary of Pangnali Village.

Ms. Zhang Shuzhen and Ms. Huang Fengqin were arrested on October 16, 2020, by the Tonghe County Domestic Security Division. They were taken to a detention center in Harbin City. No family visits have been allowed.

Over ten officers from Nancai Police Station arrested Ms. Chen Guirong and searched her home on September 3, 2020. They did not find anything they were looking for. Ms. Chen was detained at the Shunyi Detention Center for seven days and then released.

Ms. Yue Guihua was tried by the Pinggu Court on October 30, 2020. Her lawyers and two family members attended the hearing.

Around 9 p.m. on October 29, 2020, Ms. Ai Yanjing was arrested at home by officers from Zhengnan Police Station.

Ms. Ma Haiyun was arrested at noon on October 23 after she was reported for distributing informational materials about Falun Gong. The police ransacked her home and confiscated her cellphone and computer. She is now detained at a detention center. The guards didn’t allow her family to visit her and also refused to accept the clothes they sent her.

Ms. Zhang Weihong was arrested on October 10 and detained in a special ward in a hospital.

Ms. Hu Xiuzhen, 79, was harassed at home on October 27, 2020, by residential committee staff and asked to sign a statement, promising not to practice Falun Gong. She refused to comply, and the officials intimidated her.

Ms. Liu Yufeng and her family received several harassing phone calls from the local residential committee, who kept asking her if she still practiced Falun Gong.

In October 2020, police and residential committee staff in Daqing City went to many practitioners' homes and attempted to force them to sign statements to renounce Falun Gong.

Yu Chunjiao, the Party secretary of Xizhaishe Community in Ranghulu District, went to Ms. Shi Yawen's home and tried to force her to sign the statement. Ms. Shi refused. Then Yu went to threaten Ms. Shi's daughter and son-in-law.

Zhang Wingwei from Longgan District Police Department also called Ms. Shi's daughter several times. Her daughter couldn't bear the harassment and signed the statement for her mother. Later, two people from the community came back to Ms. Shi's home and told her to sign the statement.

Ms. Lin Shuxian, 70, from Chaoyang District, lives by herself. Her family lost contact with her on October 19, and her current whereabouts is unknown.

Liang Changfu and three other officers from Huimin Police Station broke into Ms. Zhao Li's tailor store at noon on October 27, 2020. They drove away 5 or 6 customers and told Ms. Zhao to sign a statement to renounce Falun Gong. After Ms. Zhao refused, they threatened to harass her parents.

On October 29, 2020, the Party secretary of Shuhu Village in Duchang County and three other people went to Mr. Wang Huosun's home and demanded that he sign a statement to renounce Falun Gong. Mr. Wang refused. His parents, who are nearly 80 years old, cooperated with these people and forced him to leave his fingerprint on the statement. Mr. Wang has a physical disability and was unable to resist.