(Minghui.org) Falun Gong practitioners in Helsinki, Finland held a signature collection drive on the square at Kamppi Center on October 31, 2020, exposing the Chinese Communist Party’s (CCP) persecution over the past 21 years.

A woman named Valentina from Ethiopia, her husband, and children happened to pass by the activities. A practitioner told them how the CCP has slandered Falun Gong with the self-immolation hoax and persecuted practitioners. The husband said he had seen Falun Gong activities in South Korea and knew about the CCP’s brutality, “I absolutely stand on your side,” he added. 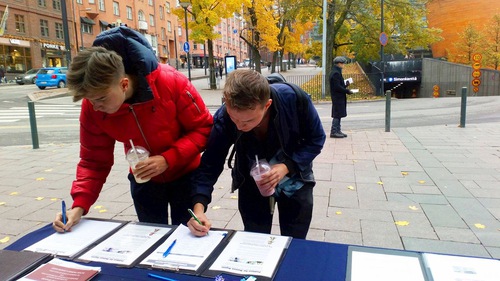 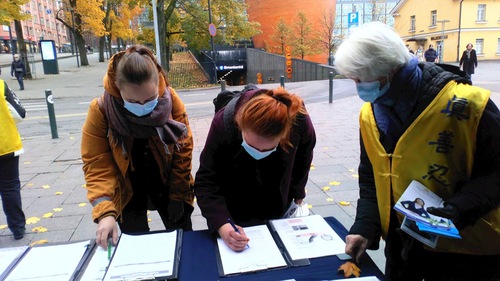 People in Helsinki sign a petition condemning the persecution.

A local resident named Hannali and her husband went straight to the booth to sign once they saw it. Hannali said she lived in Hong Kong for years and knew about the terrible situation there after the National Security Law was enacted. They were also aware of the CCP’s infiltration in Finland. They told a practitioner, “Thank you for sharing the information! We appreciate your hard work!”

Two friends, Kiia and Milla, signed the petition. Kiia said that she had taken Mandarin classes before and loves Chinese culture. Both girls were excited to receive an origami lotus flower. They said in Chinese, “Thank you! It’s pretty!” 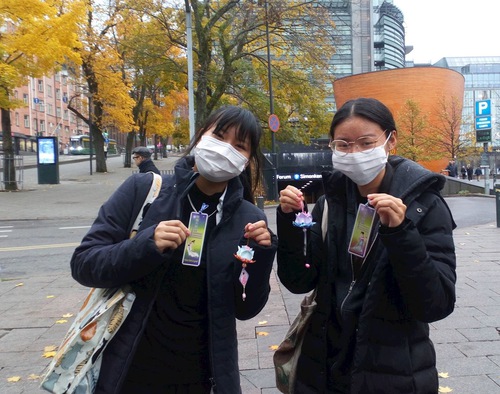 When practitioners were packing up at the end of the activities, a man ran over and asked, “Do I still have time to sign?” As he was penning his name, he was saying he was glad to have the opportunity to support Falun Gong.