(Minghui.org) Falun Dafa practitioners in Stuttgart, the sixth largest city in Germany, once again held activities in the city center on October 24, 2020. They demonstrated the exercises, introduced the mind and body cultivation practice, and told people how the CCP (Chinese Communist Party) persecutes the practice in China.

After a rainy night, the morning air was fresh and clean. Due to the coronavirus pandemic, there are fewer people out and about these days. As practitioners began doing the Falun Dafa exercises, people stopped to listen to the peaceful music. After they learned how practitioners are persecuted in China for doing these exercises, many people signed the petition to condemn the persecution. 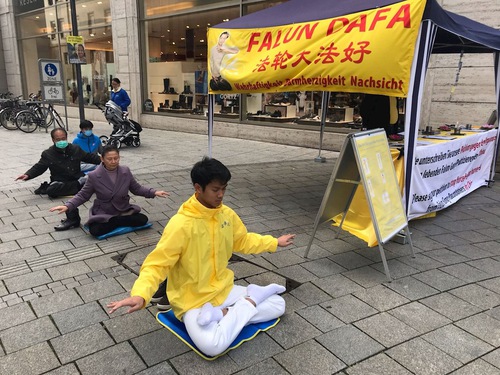 Practitioners demonstrate the Falun Dafa exercises in Stuttgart on October 24.

As a group of students walked by the Falun Dafa booth, one girl accepted a flyer and was shocked to learn of the organ harvesting from living practitioners imprisoned in China. When she heard that this crime was state-sanctioned and conducted by the CCP, she called the other eight students to come back. They waited in line and all of them signed the petition to end the brutality.

When two tourists came to the booth, one of them thanked practitioners for their efforts to raise awareness about what is happening in China. He explained that he had seen practitioners' activities before and signed the petition. When he left, he pressed both palms together in the “heshi” position and wished practitioners well. 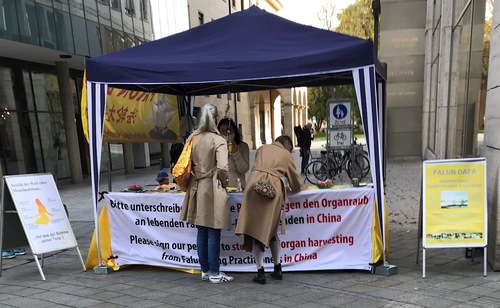 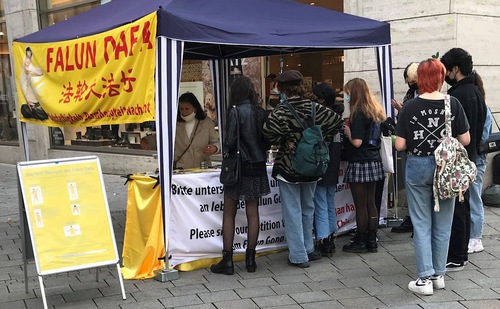 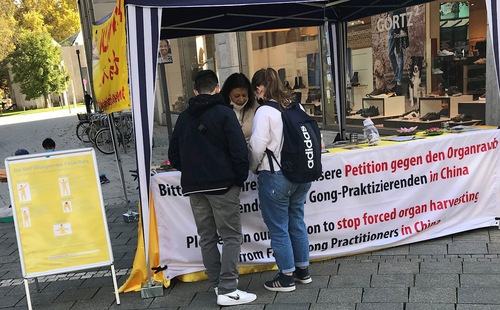 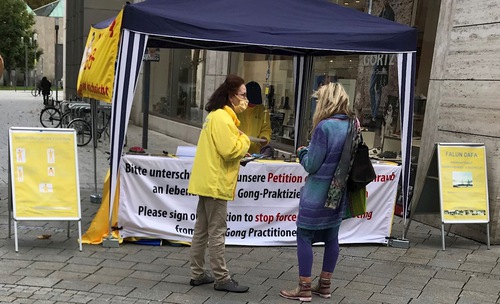 “I Hope My Signature Will Make a Difference”

One young woman who knew little about Falun Dafa was glad to learn more. She was surprised to hear that the CCP has persecuted the practice for 21 years and even killed practitioners, selling their organs for profit.

“That is terrible! I've read that the regime set up many concentration camps and detains innocent people. I hope my signature will make a difference,” she said.

Another tourist took a pamphlet and said he was interested in learning Falun Dafa. “I read the banners,” he said. “It's hard to believe people have been persecuted by the CCP for 20 years for doing such peaceful exercises.”

After signing the petition, he was curious about how to practice and asked several questions. Because he was just visiting Stuttgart, he did not have much time that day. He said he would get in touch with Falun Dafa practice sites near his home.

After sightseeing all day, a well-dressed woman stopped by a fountain to rest and watched practitioners as they did the exercises, then she came over and read the display board. After watching practitioners meditate she asked, “Do you mind if I take a picture? I want to look into this—everything feels so serene and pure here.”

An Oasis of Truth in a World Filled with Lies

A woman in her 50s hurried past. When she saw the booth, she yelled, “Lies, lies, the entire world is lying!”

“Ma'am,” a practitioner asked her politely, “have you heard about Falun Dafa?” Surprised by the question, the woman turned back and said, “The entire world is lying and we are cheating ourselves. At least 90% of the people are telling fake stories and you can't trust anyone.”

“You are right,” another practitioner replied. “In a world filled with lies, being honest is difficult.” The practitioner pointed to a flyer and said, “That is why we Falun Dafa practitioners cherish the principles of Truthfulness-Compassion-Forbearance and live by them.”

The woman smiled. After the practitioner explained that they were there to tell people about the persecution in China, she signed the petition without hesitation.

An hour later, the woman walked past the booth again, looking much calmer than before. Seeing the practitioners all sitting quietly meditating, she stopped and watched.

After a few minutes, she went over to a practitioner, sat down in front of her, and began to the learn the exercises.

“Podcast (Cultivation): “How to Recognize Our Harmful Notions””