(Minghui.org) More than 800 Falun Dafa practitioners from Chiayi, Tainan, Kaohsiung, Pingtung, Taitung and Penghu in Southern Taiwan attended a day-long Fa study and experience sharing session at Fu Cheng High School in Kaohsiung. They encouraged each other to cultivate diligently.

Practitioners treasured the opportunity to come together during this special time when the Chinese Communist Party (CCP) virus has spread around the world. They expressed their wishes to cultivate more diligently and promote the beauty of Falun Dafa so that more people could benefit from the practice. 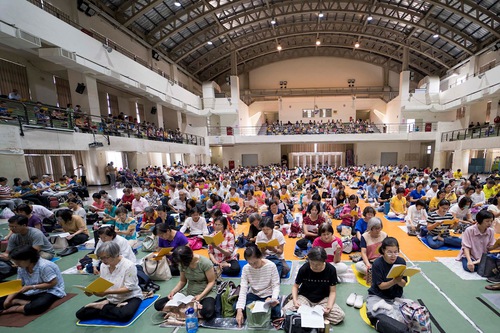 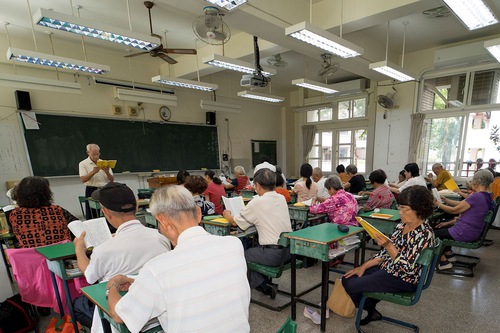 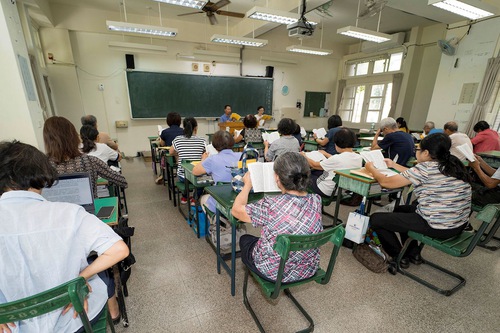 Practitioners formed 34 smaller groups to read the Fa together and share experiences. Each practitioner put in an effort to look within to find their shortcomings in cultivation. They encouraged each other to do the three things more effectively and also shared experiences of studying the Fa, sending righteous thoughts, and clarifying the truth. They had many great discussions and practitioners felt that they benefited a lot.

In the afternoon the practitioners all gathered together in the hall. Several practitioners came to the stage to share their experiences of clarifying the truth to people through their projects. Practitioners from The Epoch Times and New Tang Dynasty Television shared their cultivation experiences from working in these media projects.

Letting Go of the Pursuit of Personal Interest

Ms. Shih has practiced Falun Dafa for 10 years. She used to suffer from allergies and would occasionally become comatose. Doctors were not able to cure her, and she often blamed them for their incompetence. Doctors had told her not to do any exercises, but to have massages or go to hot springs. Ms. Shih felt like her life lacked any meaning and she was losing hope.

She noticed people were practicing Falun Dafa in the park behind her home. Her friend had told her about the amazing health benefits of practicing Falun Dafa. She considered herself fashionable and a lively person and didn’t believe she could get well by sitting still. But one night she went for a walk in the park and saw practitioners practicing the exercises and doing the sitting meditation. The movements were beautiful and she was intrigued. She decided to practice Falun Dafa. Unexpectedly, her health started to improve and her immune system strengthened. She was so happy that she introduced Falun Dafa to her friends and relatives so that they could also benefit.

Ms. Shih quit her job and opened a restaurant with a friend, but they didn’t run it for long before they wrapped up the business. She and her friend became embattled in a bitter conflict. Ms. Shih felt wronged and couldn’t accept it. She couldn’t calm down so she decided to attend the nine-day-lecture session again in the hopes that she could pass this xinxing test and cultivate diligently like she had before. On the seventh day of the class, she found her hidden attachment to personal interest. She tried to let it go. She felt that her body became light once her xinxing improved. Amazingly the environment changed for the better as well.

“Looking back, I realize that there are cultivation elements in every incident. All arrangements are good. Only when you let go of human attachments can you return to your original true self,” she said.

Ms. Lin from Houshan shared a recent experience of forming a group to make phone calls to people in China.

She and some other practitioners formed a group to make phone calls to people in China. They studied the Fa before making calls and reminded each other to speak kindly and with compassion and that every thought must be pure. The other party would then be able to feel it, and they would achieve better results. When they made phone calls in the group, they felt the energy field was strong and they had less fear. Everyone prepared their transcripts carefully and learned from each other. More experienced practitioners would help the newcomers. They improved together very quickly.

Because the CCP deliberately covered up the truth about the pandemic, Chinese people often didn’t want to listen to them or were indifferent. Some even shouted at them when they talked about the pandemic. But there were still some kindhearted people. One lady in Wuhan listened to Ms. Lin attentively and agreed to withdraw from the CCP. She listened to Ms. Lin's advice and loudly recited, “Falun Dafa is good” and “Truthfulness-Compassion-Forbearance is good.” Ms. Lin was very touched.

“I can feel Master is right beside us and encouraging us when we make phone calls. During the last leg of the Fa-rectification period, we must cultivate diligently, make full use of our time and help more precious Chinese people learn the truth so they can avoid disaster,” Ms. Lin said.

Falun Dafa Is the “Noble Man” in my Life

Ms. Lu is from Chiayi. She injured her right wrist while exercising 14 years ago. She had sought various treatments, but none of them helped and her joints eventually became stiff. Her doctor couldn’t identify the cause and said it was “heavy rheumatoid arthritis.” It was not curable. Ms. Lu went on medication to prevent her limbs from becoming deformed. It was a heavy blow and she felt that she would rather die. But gradually, she changed her mindset and started going to temples to seek help from Buddhas. She was told that a “noble man” would come to help her. She was hoping that the “noble man” would come a little sooner.

She came across a Falun Dafa practitioner in a park in March 2008. A practitioner introduced Falun Dafa to her and gave her a copy of Zhuan Falun to read. She started to practice Falun Dafa. After she had practiced for eight months, she started to memorize Zhuan Falun, because she understood that memorizing the Fa is beneficial from listening to practitioners at an experience sharing meeting. She has since recited the book six times. She has been making phone calls to people in China for nine years. She said reciting the Fa has helped her maintain good xinxing. Regardless of who she talks to on the phone, she always talks to people in a peaceful and calm manner.

Letting Go of the Competitive Mentality

Ms. Yeh is from Kaohsiung. She operates a small business with her husband making hydraulic components. She borrowed a lot of money from the bank initially and then went further into debt later on. They were in financial difficulty for more than 10 years. She developed insomnia due to the heavy pressure and became plagued by other illnesses.

She became actively involved in group Fa-study, annual experience sharing conferences, the promotion of Shen Yun Performing Arts, parades in Hong Kong and other truth-clarification activities. She realized that whatever happened in her life was arranged for her to cultivate.

“I enlightened that my business partner is actually helping me improve my xinxing. I really should thank him. Gradually, I have found that my competitive mentality is weakening. I am not that easily angered when I encounter conflicts,” she said.

Mr. Hsu works at the Railway Bureau and has practiced Falun Dafa for eight years. He used to be irritable and would easily lose his temper. He was dominant in his family and didn’t listen to other people. There was always tension in the air. He fought with his colleagues at work. After he practiced Falun Dafa, he realized that he had to get rid of his attachments and he started to improve himself.

He clarified the truth about Falun Dafa to his colleagues. When he asked one of his colleagues who he had fought with previously to sign a petition to stop the persecution of Falun Dafa, the colleague signed the form immediately. Because of how much Mr. Hsu had changed, the environment around him changed.

More than 500 employees work at his office. One of the directors said to him: “I have worked here for nearly 40 years. I have never seen a person who has changed as much as you.” Mr. Hsu told him that he had changed because he now practices Falun Dafa and abides by the principles of Truthfulness-Compassion-Forbearance.” Mr. Hsu is very thankful to Master Li (Falun Dafa's founder).

“The Steadfast Cultivation Path of a Young Practitioner”