(Minghui.org) A Songyuan City, Jilin Province resident was recently sentenced to five years by the Qian’an County Court for his faith in Falun Gong (also known as Falun Dafa), a mind-body practice that has been persecuted by the Chinese communist regime since 1999.

Mr. Sun Zhanguo was arrested in September 2019 after being reported for putting up stickers reading “Falun Dafa is good.” He has been detained at the Qian’an County Prison for a year. The authorities informed his family that they were planning to transfer Mr. Sun to another detention facility, but without specifying where.

Mr. Sun, then in his 40s, was arrested on June 13, 2007 and given one year of forced labor. Because he refused to renounce Falun Gong, the labor camp informed the 610 Office, an extralegal agency created to persecute Falun Gong, before his release, and planned to subject him to further persecution.

On the day of his scheduled release, June 6, 2008, the police took Mr. Sun from the labor camp directly to the Qian’an County Detention Center. After more than two weeks of detention, he was sent back to the Yinmahe Forced Labor Camp to serve another 1.5 years. He wasn’t allowed to go back home in between.

Tortured in the Labor Camp

One of the major torture methods used against Falun Gong at the Yinmahe Forced Labor Camp was sitting on a wood plank from 4:30 a.m. to 9: 30 p.m. with one’s legs crossed. The guards could extend the time of the torture at will, sometimes for days on end. Some practitioners’ buttocks because inflamed or developed open sores as a result of the long-term sitting.

The guards not only forced Mr. Sun to sit on the wood plank, but also tied his upper body to his crossed legs and then had an inmate sit on him. 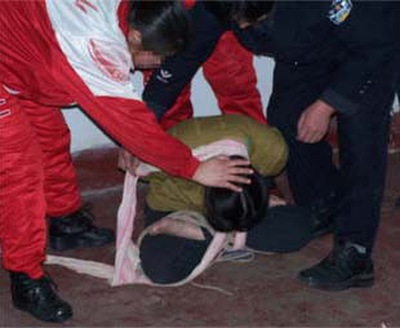 Torture reenactment: body and legs tied up together

In addition to the above torture, Mr. Sun was also forced to do hard labor, loading bundles of bricks produced in the labor camp to trucks.