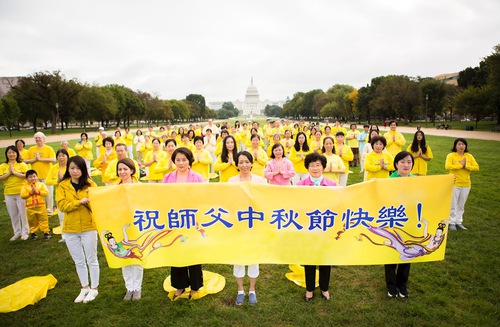 Falun Gong practitioners from Washington, D.C. gathered in front of Capitol Hill for a group photo on September 27, 2020.

Practitioners gathered on Capitol Hill for a group photo on September 27, 2020. Then, they did the exercises near the Washington Monument. Some gathered in front of the White House while others told onlookers about Falun Dafa and its persecution by the communist regime in China. 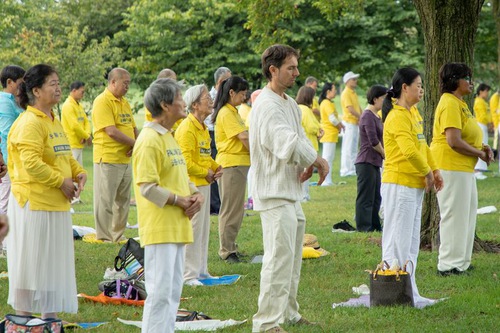 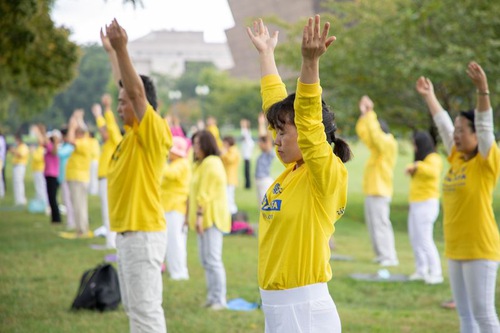 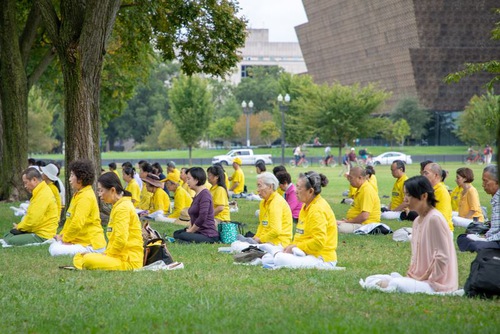 Falun Gong practitioners do the exercises at the Washington Monument. 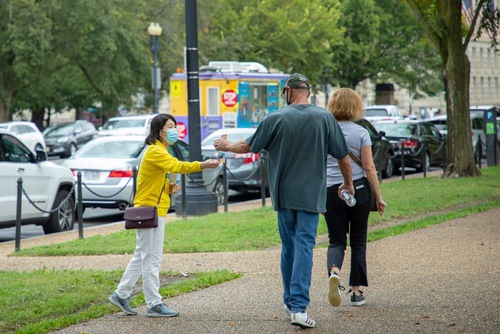 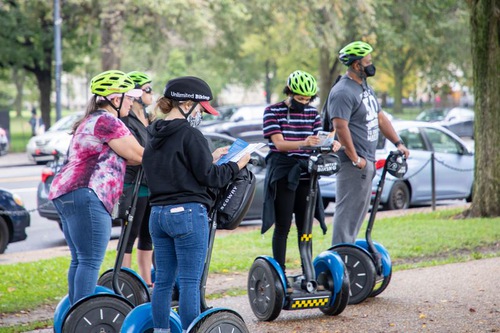 Some practitioners at the event said they understood the true meaning of life and looked forward to living their best every day. They would also face difficulties and challenges calmly in an effort to become better people. They said they are grateful for Master’s guidance and protection and feel indebted and respectful to Master; only by cultivating diligently can they repay him. 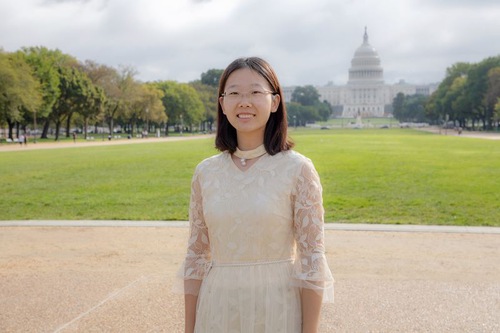 Ms. Zhou Gui, 27, said she feels very grateful to Master for “letting her not be deluded.” She is now working as an accountant for an international biotechnology company.

Remaining on the Cultivation Path Despite Persecution

Ms. Zhou Gui started to practice Falun Gong with her family at a young age. The first book she ever read was Zhuan Falun, the main book of Falun Gong. The principles that Master Li Hongzhi taught were deeply embedded in her memory and helped her face difficulties in life.

When the Chinese Communist Party (CCP) launched its nationwide crackdown and persecution of Falun Gong, Ms. Zhou's mother was illegally arrested five times. At school, her classmates distanced themselves from Ms. Zhou, and the teacher removed her from the class monitor position. Ms. Zhou did not feel sad. She knew that her teachers and classmates did not know the truth about Falun Gong.

One day after school, Ms. Zhou was met by two policemen. Her neighbors had already taken her mother to a safe place. The policemen then told Ms. Zhou to have her mom give up her belief in Falun Gong. Ms. Zhou, however, told them that her family had benefited a lot from Falun Gong. Not only did her grandparents, who are in their 70s, save in medical expenses, but they also started to farm a big piece of land. Her grandmother, who used to be blind in her left eye, regained some vision, and her whole family lived harmoniously after she started practicing.

The policeman responded, “Didn’t your school teachers tell you what is good and what is bad?”

Ms. Zhou Gui said: “The school teachers did tell me that Falun Gong is bad, but that’s what the government told them to do. It’s not true, and it’s not right.”

The two policemen were speechless after their conversation. Zhou Gui was only nine years old at the time.

Zhou Gui came to the United States six years ago and worked a part-time job at a Chinese restaurant. She worked six days a week and felt exhausted. Being alone in a foreign country was truly a challenge. Back in China, she was once an honor student who was adored by her parents.

“During my toughest moments,” she said, “I would remember Dafa’s teachings. I would try my best to do well and not hold any grudges. I regarded suffering as joy and tried to be compassionate to everyone around me.”

No matter how hard life was for Zhou Gui, she persisted in studying the Dafa teachings, practicing the exercises, clarifying the truth, and attending Falun Gong activities.

Zhou Gui said, “I need to look inward and think of others’ needs first when I face conflicts. Sometimes it was very hard for me, and I felt wronged. But I know Master is pushing us forward to do better and become a person who follows higher standards. I am very grateful to Master, and Master is also very compassionate. Regardless of how we do in cultivation, Master would never give up on us. He is always guiding us and giving us the best.”

Zhou Gui’s accountant position at a biotechnology company required over 20 years of experience, but she only had training for one year and is very competent in what she does. Her talent was discovered by the company when she worked at an accounting firm associated with the technology firm.

Zhou Gui’s workload is very heavy, and sometimes there are problems she cannot solve. “At night I would ask Master for help and ask for the wisdom needed to solve the problem,” she said.

“Sometimes I would have no idea how to proceed with a task, but after a day or two I knew the answer and solved the issue. My boss would praise me and say that I did better than others with more experience. She was very proud of me.

“A young person is always seeking a better job, fame, and fortune. But, I think that fighting for fame and gain is not the ultimate goal. Why did we come to this world, and how is everything ultimately resolved? There is a higher guidance to our moral standards. The book Zhuan Falun tells us to follow the principles of Truthfulness-Compassion-Forbearance. These principles will have different manifestation at different levels. I do not want to be concerned about materialistic possessions. I want to follow a higher moral standard and goal in my life.”

Remembering the past, Zhou Gui said that all the hardships she suffered made her what she is today and that she is grateful for Master’s guidance. “I know Master is always looking after me. I am not deluded or lost since Master always enlightens me whenever I meet with hardships and tribulations,” she said. 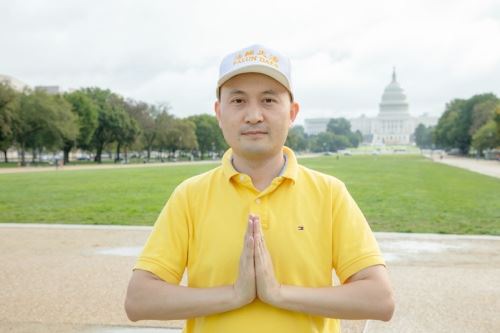 When Mr. Zhang Weiguo was nearing 30, he was well accomplished but saw his life as just a cycle, doing the same things day after day. “It wouldn’t even be pitiful if I died,” he said. He felt he was missing something and tried to read Buddhist scriptures and the Daoist Tao Te Ching. However, nothing satisfied his quest for the truth.

He was introduced to Falun Gong in middle school and felt it was wonderful. His heart told him, “Falun Gong is what I'm looking for.” Mr. Zhang recalled, “After I started practicing Dafa [in 2009], it changed me a lot, mainly my heart. Dafa clearly told me the layers of principles behind everything in this world… Dafa clearly told me the reasons behind things and pointed me to a clear path.”

Mr. Zhang now sees setbacks and hardships from a different perspective. He learned to look inward to find the cause of the hardships. There is an old Chinese saying, “The environment depends on what's in your heart.” From this saying, he realized that he is closely related to everything around him.

Mr. Zhang worked at an international software company and was in charge of a team of 50 people. One day his colleague from human resources asked him how he managed to supervise his subordinates. In other departments, everyone would be complaining about their supervisors, but Mr. Zhang’s team often praised him.

Mr. Zhang was surprised and said that he did not do anything out of the ordinary. “When your heart changes for the better, your environment will also change for the better,” he said.

Mr. Zhang said he was fortunate to have learned Dafa and was filled with gratitude towards Master Li Hongzhi. He said sincerely, “Thank you, Master, for watching over me.” 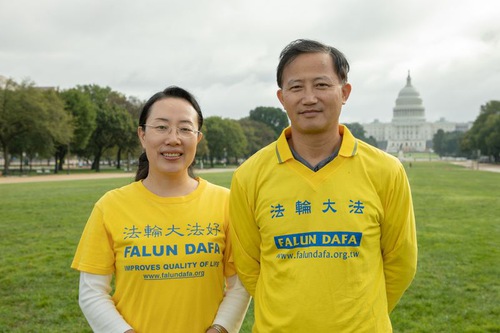 Ms. Gao Meixia, who obtained her medical degree from Peking Union Medical College, started to practice Falun Gong as a way to get rid of her illnesses. As she delved deeper into cultivation, she realized that Dafa is very broad and profound.

Ms. Gao said, “Falun Gong has not only improved my physical and mental health, but it has also cleansed my soul and allowed me to find the true meaning of life. I feel very peaceful and live with hope every day. I am very thankful to Master, and I have benefited a lot under Master’s guidance.”

Ms. Gao’s husband, Mr. Xu Shaofei, works at the National Cancer Institute. He said that after he started to practice Falun Gong in 1996, he became a better person.

“I’ve enlightened that living in the secular world is not about material possessions. We need to have our own beliefs and spiritual pursuits. I believe Truthfulness-Compassion-Forbearance are principles we need to follow. This is also something I am pursuing.”

The persecution of Falun Gong by the CCP stopped Mr. Xu from returning to China. On the occasion of the Mid-Autumn Festival, Mr. Xu wishes that practitioners in mainland China can also have a peaceful environment in which to practice Falun Gong freely.

Ms. Gao and Mr. Xu would like to send their most sincere greetings to Master Li: “Our Master does not want anything in return. I will hold my utmost gratitude in my heart, do well as a Dafa disciple, and cultivate diligently.”