(Minghui.org) At a rally and car tour on October 25, 2020, in Auckland, New Zealand, Falun Gong practitioners drew attention to the Chinese Communist Party's (CCP) persecution of practitioners in China – a brutal repression that has gone on for 21 years.

Several public officials participated in the event in the Auckland suburb of Otara. They spoke about the damage and terror caused by communism and called on the free world to counter the communist regime and defend human dignity. 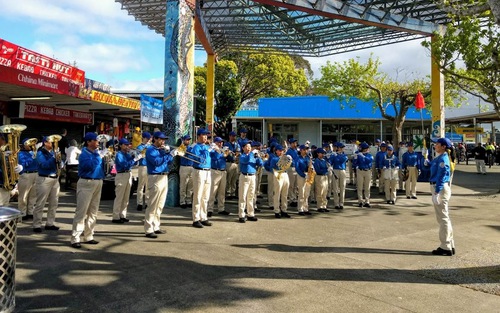 The Tian Guo Marching Band performs at a rally to denounce communism. 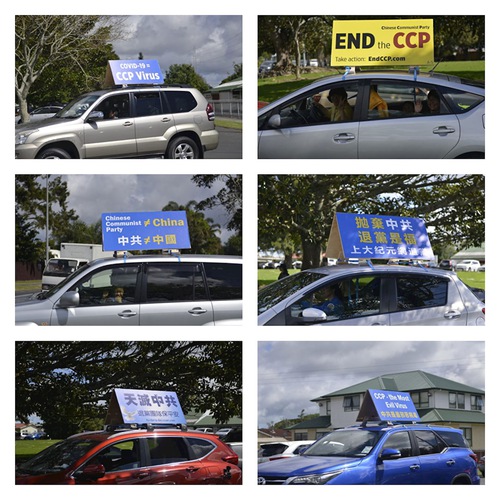 Deputy Leader of the New Conservative Party: Terror and Infiltration by Communism

Elliot Ikilei, Deputy Leader of the New Conservative Party, said both communism and nazism are frightening threats to mankind and that communism alone is responsible for the deaths of about 100 million people over the past century.

But this is only part of the damage communist regimes have caused, he said, because these regimes also undermine what is good in human nature. By focusing on material wealth, communist regimes encourage people to seize wealth without contributing anything in return. In the end, it leads to a society with no democracy or freedom of speech. Every country throughout history that has tried communism has found the results to be very negative. 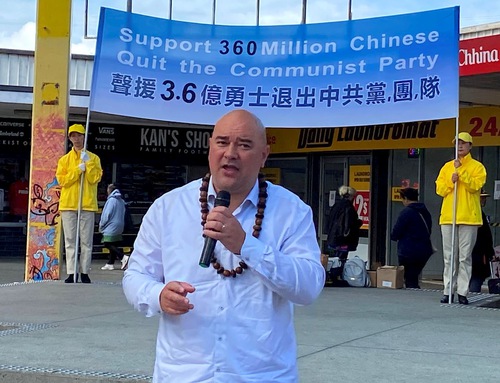 Ikilei noted that communist regimes rely on unspeakable violence to sustain their rule. During a trip to China two years earlier, Ikilei recalled speaking with a young man. The conversation was polite as they discussed family, travel, and their hometowns, but as soon as Ikilei talked about the government and the principles of fair play, the man panicked and did not know what to say. Ikilei noticed the man was fearful, as if any word he said and every movement he made were under surveillance. This was the first time Ikilei had experienced the terror caused by communism firsthand and he was shocked by the reality of it.

Unfortunately, communist ideology has spread to the West through infiltration, he said. The younger generation is no longer pure. Rather, through deceit and brainwashing, they are inheriting communism. He emphasized the importance of telling young people what is right and wrong so that future generations will not become victims of communism or demons without souls.

Ikilei called on people to say no to communism and to work hard for a better future. 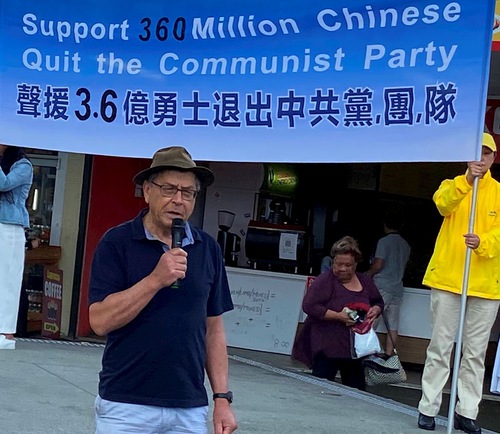 Anthony Brunt is a former city councilor in Wellington.

Anthony Brunt, former Wellington City Councilor, said he had just seen a picture of a prison in Xinjiang Province, China. It was one of the more than 300 prisons in Xinjiang used to incarcerate Uyghurs and other groups the Chinese communist regime suppresses. This prison spans three kilometers (about two miles). He remarked that the tyrannical regime has turned China into an Orwellian State where millions of people are detained and many more are suffering.

Brunt was also concerned about the forced organ harvesting in China. Since Falun Gong, a peaceful meditation group, was suppressed in 1999, an estimated one million or more people have become victims of forced organ harvesting, meaning that the CCP killed them to profit from the sale of their organs. This is a crime on par with the Holocaust during World War II.

With these issues in mind, Brunt reiterated that people must be wary of the CCP’s activities. Otherwise, the next generation, even children in New Zealand, could be affected. As the second largest economy in the world, the CCP has leveraged its power to suppress human rights and freedom of speech and has even interfered with elections in other countries.

After subjecting Tibet and Xinjiang to its barbarities, the regime has now spread its totalitarian rule to Hong Kong. Brunt stressed that people should be on alert as the world will not be safe until the CCP is eradicated.

Geoffrey Fyers, Secretary General of the Universal Peace Federation, said he appreciated what had been said at the rally because the CCP has truly infiltrated the entire world and that this is especially the case regarding its suppression of religious belief.

According to Marxism, human beings are merely animals, a product of evolution. By this logic, animals can be killed, and thus humans can be slaughtered. But the truth is, human beings are totally different from animals because humans have human nature. People should respect each other. In China, on the other hand, so many people are killed for their organs.

Fyers said that all people are equal. Through the Internet, we can access information from around the world. That means we need to dig further and find out what the CCP has been doing to its people. With that knowledge, we should raise awareness of such issues instead of closing our eyes and burying our heads in the sand as if nothing is happening, because whatever occurs in China today could happen in New Zealand tomorrow.

With tears in his eyes, Fyers recalled his family history. At the beginning of the 20th Century, his grandfather boarded a battleship to fight Germany in World War I to protect freedom for New Zealand, and in World War II, his 17-year-old father traveled to the Middle East and Italy to fight Nazi Germany, all to safeguard the freedoms of belief, speech, and democracy that New Zealanders hold dear. 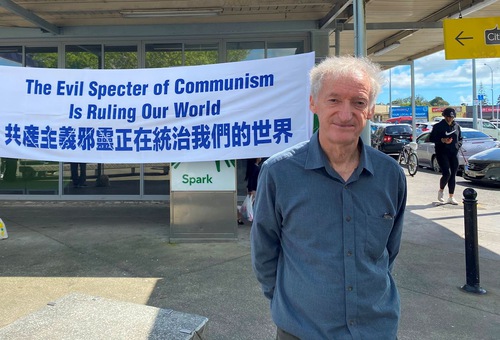 Fyers said it was now his turn. Freedom in New Zealand is under threat and many news media as well as elected officials dare not say or do anything because of their own material interests. He said that people should step forward and say no to the CCP. If not, freedom and democracy could be lost, because the CCP brings only violent revolution.

He said that New Zealand used to support China, but it is now heavily dependent upon China. The CCP knows that and it intends to control New Zealand as well as other countries in the Pacific Islands. He said that Australia and New Zealand should take the lead in protecting those smaller countries.

Communism Is a Big Lie

Tony Browning is a teacher who has read a great deal about communism. He said that communism infiltrates everywhere it goes and bullies anyone who stands in its way. That’s what it is like in North Korea, where people live in terror and poverty.

He said communism overly emphasizes class struggle, such as that between employers and employees. “Although many young people think communism is good on the surface, they do not know it actually leads to the suppression of religion and to dictatorships. Communism is a big lie.”

“A Reminder to Look Within When Facing Interference”