(Minghui.org) Falun Dafa practitioners held activities near the Liberty Bell on October 10, 2020, where they demonstrated the Falun Dafa exercises and told people how the Chinese Communist Party (CCP) persecutes the practice.

From the beginning of the United Sates, the Liberty Bell has been a cherished symbol of freedom, a reminder awakening people's conscience. 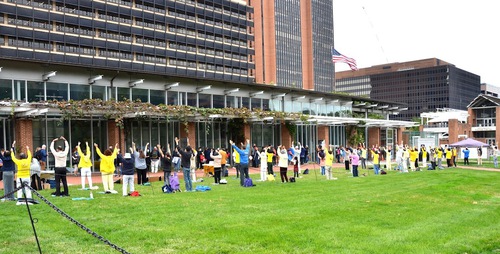 Practitioners demonstrate the exercises during activities held near the Liberty Bell on October 10, 2020. 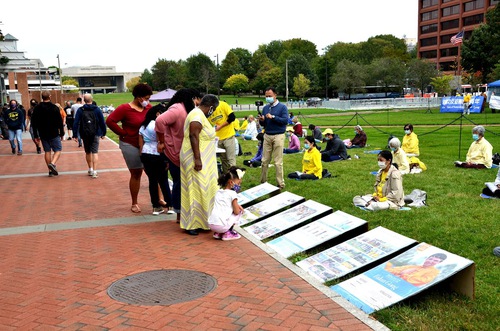 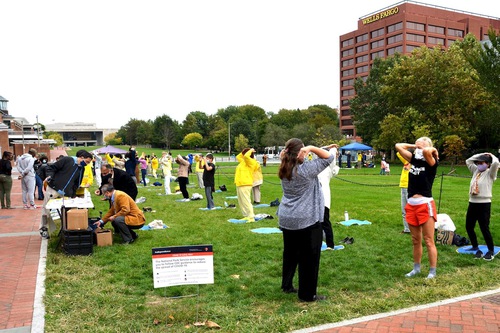 Many tourists paused to learn about the event and signed the petition to condemn the persecution of Falun Dafa in China. Marcella from Virginia said she learned more about the CCP’s crimes from the coronavirus pandemic and said all people should stand up to stop the CCP’s killing of innocents. 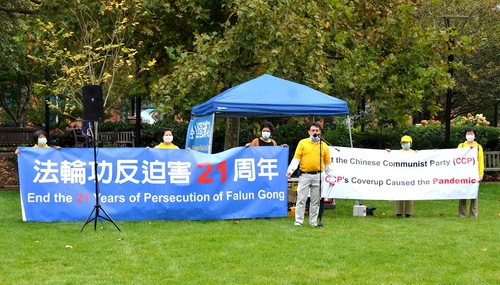 Alex, the rally organizer, read out a letter from Pennsylvania Governor Tom Wolf to celebrate the 28th anniversary of Falun Dafa’s public introduction on May 13. The letter was recently received as government offices were closed for months due to the pandemic. 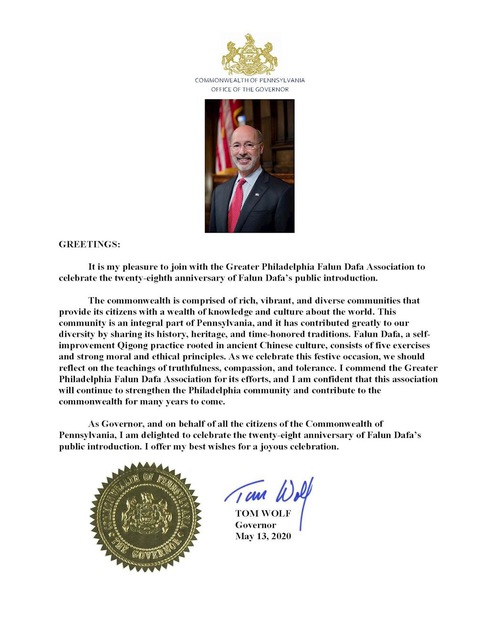 “The commonwealth is comprised of rich, vibrant, and diverse communities that provide its citizens with a wealth of knowledge and cultures about the world,” Governor Wolf stated in his letter. “This community is an integral part of Pennsylvania, and it has contributed greatly to our diversity by sharing its history, heritage, and time-honored traditions. Falun Dafa, a self-improvement Qigong practice rooted in ancient Chinese culture, consists of five exercises and strong moral and ethical principles. As we celebrate this festive occasion, we should reflect on the teaching of truthfulness, compassion, and tolerance. I commend the Greater Philadelphia Falun Dafa Association for its efforts, and I am confident that this association will continue to strengthen the Philadelphia community and contribute to the commonwealth for many years to come.” 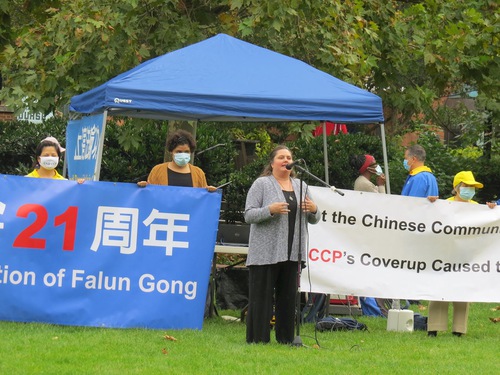 Several practitioners talked about their experience of practicing Falun Gong.

Jennie grew up in Philadelphia. Her ancestors were Quakers, who came to America from England in the 17th century in pursuit of freedom of belief. They settled in Pennsylvania in large numbers.

Jennie was searching for ways to improve her health when she found information about Falun Dafa online. She met with practitioners at the Liberty Bell in January 2012. She was delighted that her chronic illnesses were resolved within two months after she began practicing Falun Gong and said they haven't relapsed.

Doctoral Student Tortured for His Belief 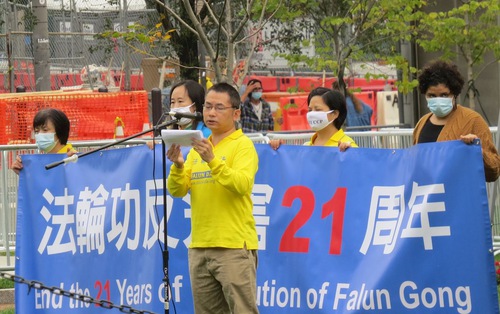 Doctoral student Kui Huang was dismissed from university, arrested and tortured in China.

Kui Huang said he was a doctoral student at Tsinghua University in 1999 but was forced to leave school for three months because he practiced Falun Dafa. He was later dismissed and arrested.

He was arrested in Guangdong Province in December 2000 and sentenced to five years in prison, where he was tortured. “I was tortured in various ways during those five years, including electric shocks with high power electric batons, force-feeding, forced labor, deprivation of sleep for a month, and brainwashing.”

Dr. Russo of Doctors Against Forced Organ Harvesting (DAFOH) said that the CCP’s persecution of Falun Dafa is unprecedented. “We cannot wait for the CCP to describe the facts,” Dr. Russo said. “We must keep looking for the facts. It is the duty of us human beings and the moral obligation of people working in medicine.”

A tourist from Vietnam said she knew about the persecution. She said, “The CCP also persecutes underground churches, Xinjiang and other minority groups. Only by disintegrating the CCP can there be a future.” 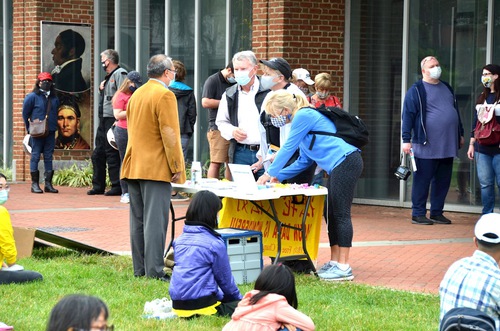 Tourist: Everyone Should Safeguard Conscience 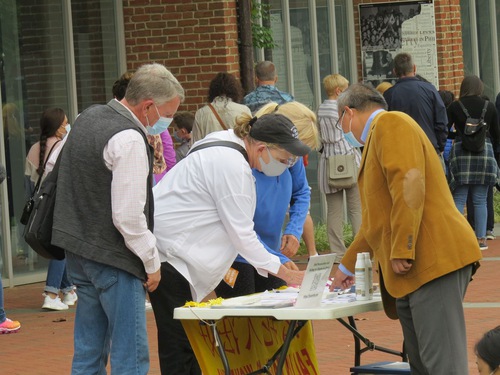 Mr. and Mrs. Ronnell from Nevada said that holding this event at the Liberty Bell was especially meaningful “because this is the symbol of liberty in the United States, and many people can learn about the persecution.” 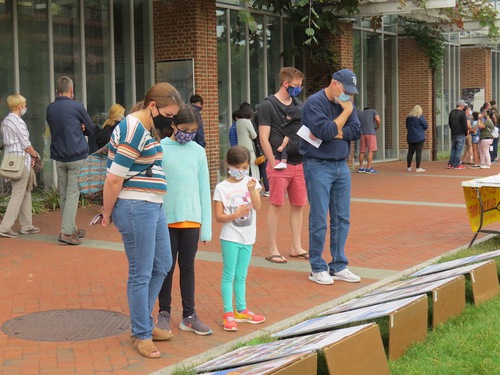 The Stella family views the posters.

The Stella family of four from Georgia stayed quite a while in front of the poster boards and read each one carefully. Mrs. Stella said people should care about each other instead of fighting, which is the CCP mentality. She hopes practitioners in China can freely and publicly practice Falun Dafa again as soon as possible. 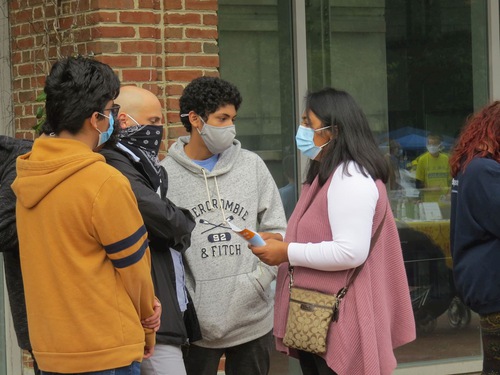 Marcella (right) and her family

Marcella from Virginia said she emigrated from Europe and lived in the U.S. for 20 years. Having seen the CCP’s initial cover-up of the coronavirus that led to a global pandemic and the regime’s subsequent disinformation campaigns, she now understands the true nature of the CCP.

Marcella said safeguarding conscience is everyone’s obligation. She signed the petition against the persecution and explained the facts to her family.