(Minghui.org) Falun Gong practitioners held an Information Day event on King Street in Stuttgart, Germany, on October 10, 2020. Despite the rain, practitioners set up a tent on the pedestrian-only street and demonstrated the Falun Gong exercises. The peaceful scene attracted many people's attention.

Many people learned more about the Chinese Communist Party’s (CCP) atrocities during the event and signed a petition calling for an end to the persecution of Falun Gong. 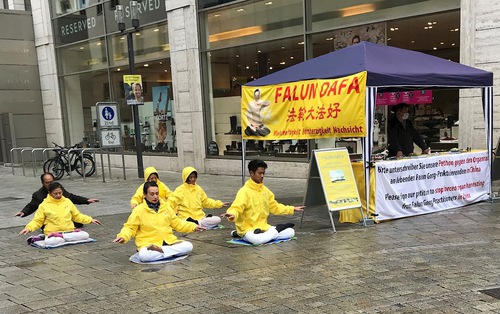 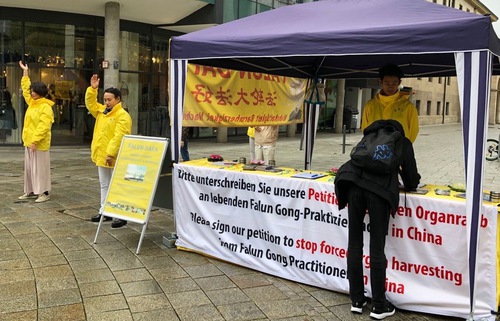 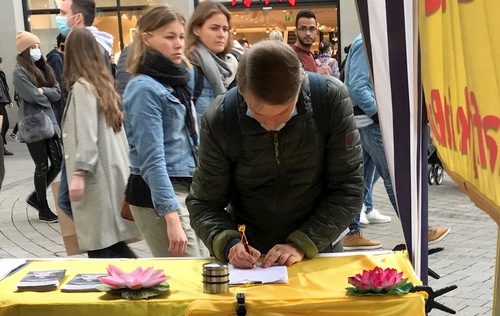 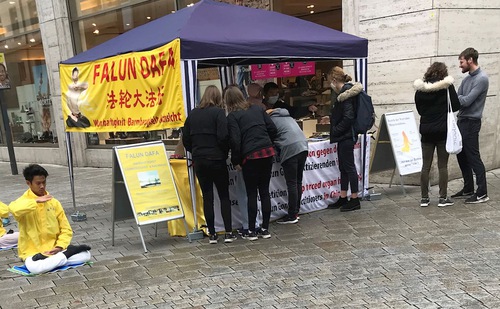 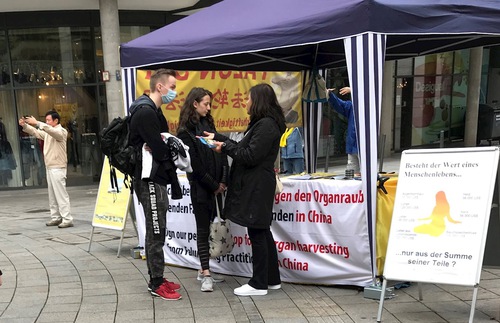 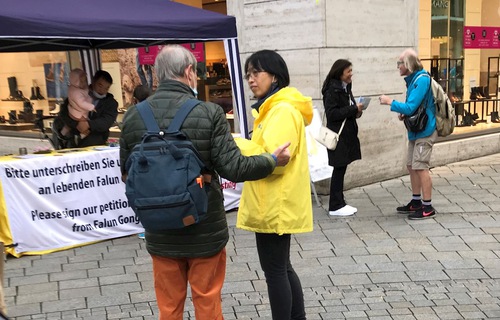 A woman named Ms. Müller told a practitioner that she had learned about the persecution years ago and would like to sign the petition. “Does it work?” she asked.

“Of course!” The practitioner replied. “The public hearing in parliament in September was because we had collected enough signatures. More and more countries are passing resolutions to hold the CCP accountable for its human rights violations and its persecution of Falun Gong.” Müller signed happily upon hearing the practitioner's explanation.

A local resident named Ms. Schinker asked a practitioner why the CCP persecutes Falun Gong. The practitioner told her that because so many people in China practiced Falun Gong, the CCP felt insecure. The regime was unsure that it could control these people if they chose to follow their consciences. The practitioner also explained that the CCP had set up an organ database and used it to match Falun Gong practitioners’ organs for transplant surgeries. Ms. Schinker covered her mouth in astonishment and tears came to her eyes. She signed the petition and wished practitioners great success in ending the persecution.

Mr. Molls watched the Falun Gong exercises with great interest and got information from practitioners about local group exercises sites and the Falun Gong website. He told a practitioner that he knew a Chinese couple. He could talk with them about many things, but if any topics touched on politics even a little bit, the couple would stop talking. The practitioner told Mr. Molls that the CCP had intimidated the Chinese people with waves of political persecution, so many Chinese dared not voice their opinion, even when they live outside China. Mr. Molls signed the petition after learning about the CCP’s persecution of Falun Gong.

“I like China!” Faysal, a tall Algerian, said in Chinese. Faysal said he had been learning Chinese for three years and loved Chinese culture. He signed the petition to help Chinese people and took flyers in Arabic and Mandarin.

“Mother of a Japanese Resident Sentenced to Prison for Her Faith”