(Minghui.org) Today's news from China includes incidents of persecution that took place in 20 cities or counties in 9 provinces, where at least 35 practitioners were recently persecuted for their belief. 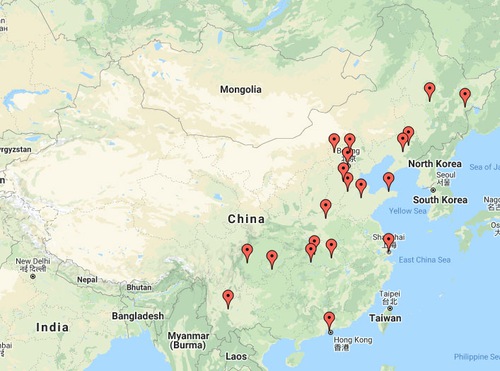 Her case was turned over to the Dayao County Procuratorate on May 23, 2020. She was later tried by video conference and given a two-year prison term.

Their cases were returned by the procuratorate twice and postponed three times before being brought to the court. The court recently sent notice that Ms. Liu and Ms. Ye would be tried on October 13.

Ms. Chen Changzhen from the Dufudi area was arrested at home by officers from the Zhonghualu Police Station and the Zhongnan Street Police Station on the morning of September 9, 2020. Her home was ransacked, and photos of the founder of Falun Gong, Falun Dafa books, and a computer were confiscated.

Mr. You Zhizhong and Ms. Pan in Hengshan District were arrested and taken to the Nanshan Police Station, Jiguan District, by urban management personnel. They were handing out desk calendars at a morning market near the Jixi Experimental Middle School around 9 a.m. on September 22, 2020.

Mr. Cao Xianggan was reported to the police when he talked to people about Falun Gong on the afternoon of September 23, 2020. Four officers from the Longhua Police Station first went Mr. Cao’s company, and then to his home, and ransacked the place. They confiscated a computer and a Falun Dafa book.

Ms. Xu Xiuyun was arrested on Xiyi Road on August 21, 2019. She was sentenced to six years in prison, and she has appealed.

Ms. Liu Junqin was tried by the Economic and Technological Development Zone Court on the afternoon of September 11, 2020. No verdict was announced in court.

Ms. Chen Guiying was arrested by officers from the Baimiao Police Station when she talked to people about Falun Gong near the Jingmen Oil Refinery on September 12, 2020.

She was taken to the Zhongxiang Detention Center the next day, and has been held there. When her children went there to give her clothes and asked to see her, the detention center officials turned them away.

Ms. Lu Aizhi from Youjia Village, Zhuqiao Town, was arrested and taken to the Dianzi Brainwashing Center when she talked to people about Falun Gong on September 23, 2020.

They pressured her to give up her practicing Falun Gong and threatened return every day if she did not sign the guarantee statements.

Ms. Qian Meixia was harassed by Ren, an officer from the Yangpu District 610 Office in August 2020. Ren told her to go to the police station and took several close-up photos of her. Ren also took blood samples from her and demanded she write 300 words before letting her go home.

On September 18 and 22, three people went to Ms. Qian’s home to harass her and threatened to keep returning.

Two people from the Shangcun Town Government, led by village officials, went to Ms. Liu Junying’s home in Liuke Village and harassed her around August 30, 2020. On the third day, the village officials led four people to her home. They harassed her, and took photos and videos.

Three officers from the Shangcun Police Station went to her home and harassed her on the afternoon of September 18.

People from the Yongchuan District Judicial Bureau, the police station, and the residential community went to the homes of Ms. Luo Taixiu and Ms. Wu Yurong to harass her in mid-September 2020.

When Ms. Luo refused to sign, her husband phoned their son and told him to sign for her.

When this same group of people came to Ms. Wu’s home a second time, Ms. Wu did not open the door, so they left.

Ms. Hua Jing was recorded by a video surveillance camera when she was distributing Falun Gong materials around May and June 2020. She was arrested and held in custody. Her current situation is not clear.

Four plainclothes officers from the Zhangbei County Domestic Security Division arrested and handcuffed Ms. Zhang Xia downstairs at her apartment building around 3 p.m. on September 22, 2020. They claimed to be investigating some leads. Around 5 p.m. the officers arrested Ms. Xing Guohua, 73, also on the grounds conducting an investigation.

Ms. Liu from the Longyuan Residential Community, Hongwei District, was arrested by officers from the Gongnong Police Station when she talked to people about Falun Gong. Further details are pending.

Two officers from the Fengming Police Station went to her home and harassed her on September 15.

Officers from the Aoyuncun Police Station and the Chaoyang Police Department, a residential police officer, and Zhou, community security officer, a total of six people, broke into Ms. Cao Xinzhu’s home and arrested her around 7:30 p.m. on April 11, 2020. The officers ransacked her home and confiscated a laptop, a cell phone, 1,000 in cash, printed materials, Chinese New Year paintings, and pendants.

They tried to take her daughter away several times, but her blood pressure was 186/125, her heart rate was 130, and she had symptoms of chest tightness and was short of breath. In the end, they did not take her.

Officers from the Sichakou Township Police Station went to Ms. Wu Dianping’s home and harassed her on May 6, 2020.

They grabbed her hand to sign and fingerprint some documents. She refused to cooperate. They videotaped her from noon until dusk. The officers did not leave until she felt dizzy, and had high blood pressure.

Ms. Zhu Airong was followed and photographed by plainclothes officers for a long time. Five plainclothes officers broke into her home and ransacked the place on the morning of July 15, 2020. They confiscated Falun Dafa books and audio players. She was taken to the Qidi Police Station for interrogation. She was forced to sign and fingerprint some documents.

They repeatedly told Mr. Tao to talk to someone in the Sub-district Committee, and threatened to arrest him if he did not cooperate.

Eight practitioners in Songzi City township were harassed and threatened with being taken to a brainwashing facility.

“Notorious for Human Rights Violations and Deceit, the Chinese Communist Party Draws Ire from the World”