Calling for an End to the Persecution of Falun Gong

Last Saturday, October 10, 2020, practitioners set up a tent in Bamberg, an ancient city. They hung up German and Chinese banners with messages such as “Stop the persecution of Falun Gong,” “Please sign to condemn organ harvesting from living Falun Gong practitioners,” “Stay away from the CCP,” and information about the “End the evil CCP” campaign that was launched by the Global Center for Quitting the CCP this June. 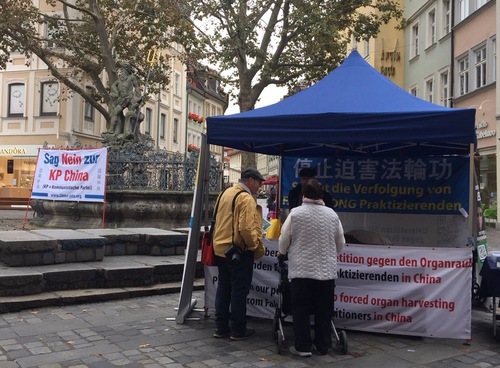 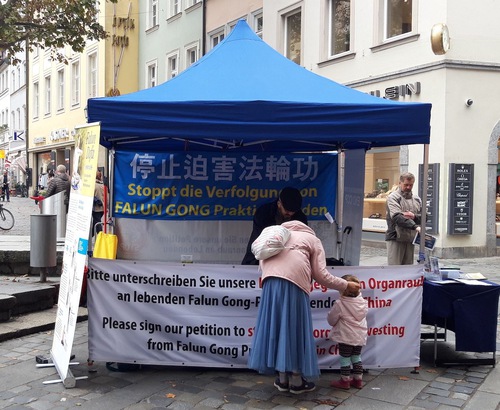 Many people saw the banners and signed the petition. One person saw the ‘End the evil CCP’ banner and shouted, “We support you!” He quickened his pace toward the tent to sign the petition.

Two women who were visiting their relatives in Bamberg passed by the tent and asked Falun Gong practitioners questions. They were very interested in what was happening in China and Hong Kong, and they wanted to know more about Falun Gong.

An elderly German woman saw practitioners demonstrating the Falun Gong exercises and came close to the tent. She had visited a local practice site to learn the exercises, but she did not persist in doing so. This time, she seriously listened to a practitioner share how he benefited physically and mentally from practicing Falun Gong. She said that she would read Falun Gong’s main book, Zhuan Falun, earnestly and try her best to make time to go to the park to do the exercises.

Practitioners held four rounds of activities at the Vierröhrenbrunnen Fountain in Würzburg City from September 20 to October 3, 2020. 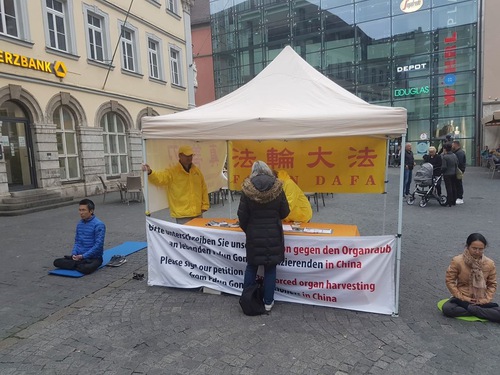 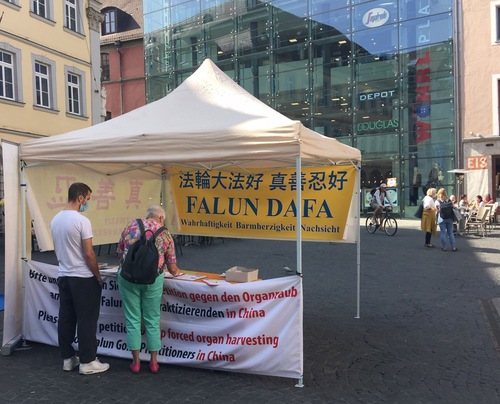 Practitioners hold an event in Würzburg City on September 19, 2020.

Just like in Bamberg, many people signed the petition calling for an end to the persecution of Falun Gong, and some thanked the practitioners for keeping up their effort.

An older German woman said that the persecution is against the law of the Heavens. When she learned that the Chinese practitioner standing beside her was illegally held in a detention center for three years for his faith, she became emotional. She said the persecution by the CCP is unconscionable and said that she would pray for practitioners.

After practitioners explained the petition calling for an end to the CCP, she said she had to sign the petition no matter what.

Practitioners returned to Nuremberg, the “City of Human Rights,” to hold an event on September 26, 2020. Their large banners attracted the attention of many passersby. 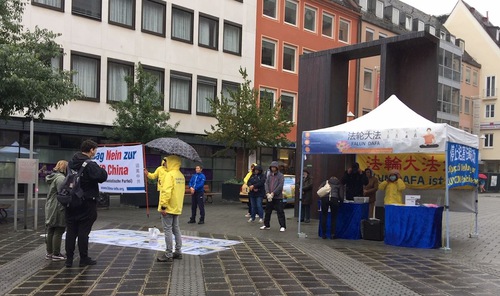 Apart from raising awareness of the persecution, the practitioner also mentioned the outbreak of the coronavirus and how the CCP’s deliberate cover-up has led many people internationally to see the evilness of the regime.

Despite the drizzle, people did not hesitate to stop by the practitioners’ event to learn more and show their support.

“Supporting Justice by Saying No to the CCP”