(Minghui.org) Falun Dafa practitioners held a peaceful protest in front of the Chinese Embassy on October 1, 2020. They urged the Chinese Communist Party (CCP) to immediately end the persecution of Falun Dafa and encouraged people to learn the CCP's true nature.

Many people stopped by to condemn the CCP and express their support. They said that they appreciated Falun Dafa’s (also known as Falun Gong) positive energy. 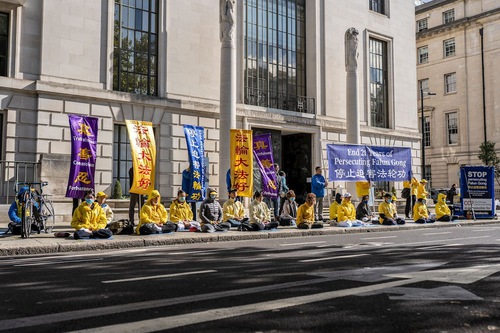 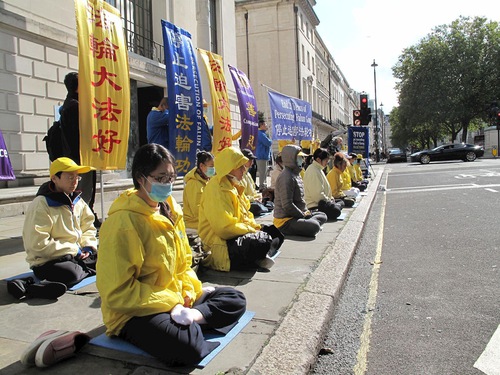 Falun Dafa practitioners at the Chinese Embassy in London protest the persecution.

Practitioners did the exercises together, distributed fliers, and informed people about the persecution of Falun Dafa. They followed the government's social distancing guidelines and wore face masks. 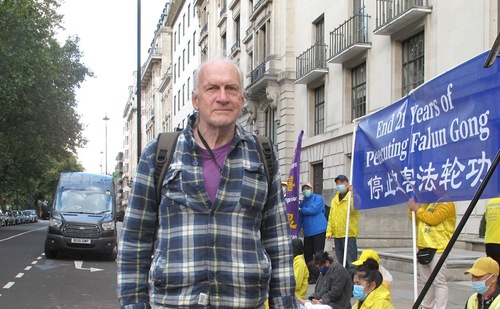 “I know Falun Dafa,” said Hugh Lang. “When I noticed this event, I came to support it.” Lang has protested the CCP’s suppression of belief for many years and signed the petition to protest the persecution.

Lang said he likes the Eastern culture of cultivation and was gratified to learn that Falun Dafa is practiced in over 100 countries. He agrees with Falun Dafa’s principles of Truthfulness-Compassion-Forbearance.

“Falun Dafa is precious to each human being. If you can have self-restraint (following Truthfulness-Compassion-Forbearance), take proper nutrition, and have proper exercises, you can gain relief from the stress due to the coronavirus.”

Lang supported the practitioners’ efforts to let people know about the persecution. He thought their peaceful protest in front of the Chinese Embassy reminded people of the persecution in China. He condemned the CCP’s crimes against humanity.

He said he understands that the CCP is not China. He hopes more Chinese will come to understand this and renounce the Party. He was happy to learn that 360 million people had already quit the Party and its affiliated organizations. 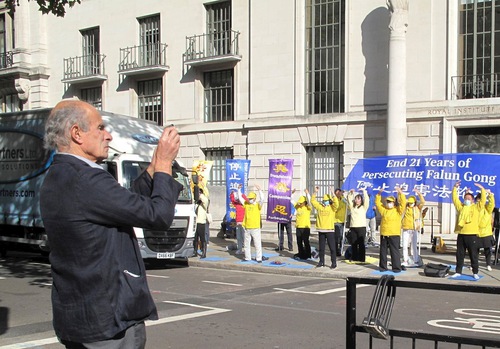 “Look at their peace and stillness,” said Anthony Silverstone, a doctor, as he passed the Chinese embassy on his way to work. He took photos with his phone and said Falun Dafa brings positive energy to the world.

He said that the peaceful protest was very important, especially in such a turbulent world, and that he agreed with the Dafa principles, Truthfulness-Compassion-Forbearance. He said that practicing these values was important for everyone.

“I Admire Practitioners’ Kindness and Peace” 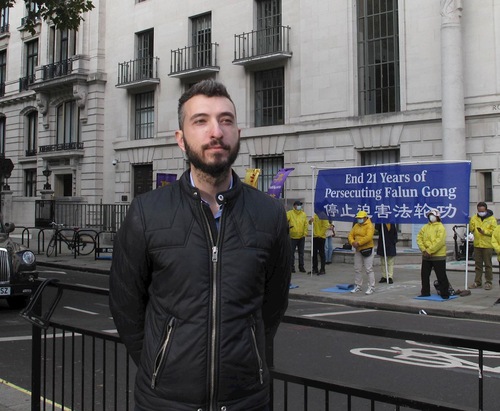 Willis opposes communism. His father is British and his mother is from Turkey. He often passes by the practitioners' protest on his way to work.

He was happy to talk with practitioners and planned to share what he learned with more people.

He said the CCP has damaged the world with lies and violence, but the practitioners’ peaceful protests expose these lies and are powerful.

“Most people don’t believe the news from the CCP or anything the Chinese government says because it is a communist regime. When a country is ruled by communism, nothing is credible, because it only allows you to believe what it tells you and forces you to do what it wants.

“I pass by here every day and see someone meditating and doing the exercises. I see peace and truth. This peaceful energy is what we need. We need to maintain peace. No matter what difficulties we encounter, we should treat them rationally like Falun Dafa practitioners do. We should not hurt each other.” 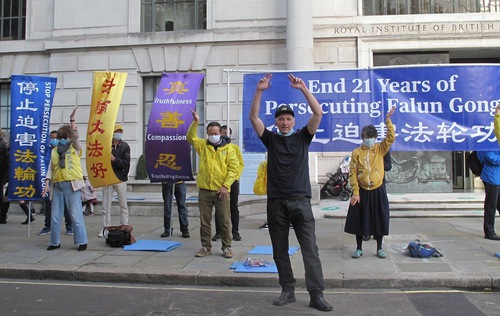 “Killing for the sake of trafficking human organs is evil. Nothing could be worse,” said Rick, a film producer, about the CCP’s state-sanctioned live organ harvesting.

He said that Truthfulness, Compassion, and Forbearance are universal values. The CCP’s persecution harms everyone in the world. He asked what he could do to help stop it.

Rick said he felt powerful energy as he watched the practitioners do the exercises. As he watched, he imitated their hand gestures and said he felt the power of cooperation among them.

“It's important for everyone to meditate and do the exercises together to maintain peace, love, and justice together. We should all work hard together.”

“The Story of Three Housemaids”

“The CCP Consulates Directly Participate in the Persecution of Falun Gong”