(Minghui.org) The U.S. House Republicans China Task Force (CTF) published a report with recommendations to counter China’s attacks on the U.S.. The report recommends that “the US government should announce to the public that it aims to defeat the Chinese Communist Party (CCP)’s totalitarian regime” and that “America’s goal must not be indefinite coexistence with a hostile Communist state, but rather, the end of the Party’s monopoly on power.” 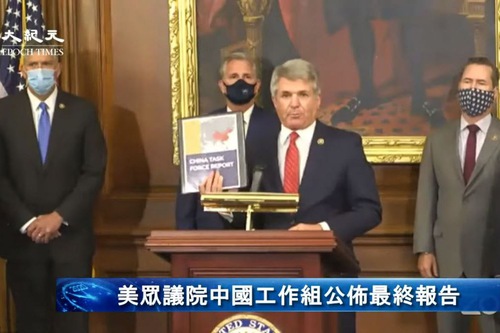 Members of the China Task Force held a press conference on September 30, 2020, and released their 141-page report. Rep. Michael McCaul, Chairman of the China Task Force, said, “The greatest generational challenge we face today is the threat of the Chinese Communist Party (CCP). As a result of the COVID pandemic that has so far killed one million people worldwide, and decimated the world economy, America has woken up to what many of us have been talking about for some time - that the CCP is our strategic adversary and has been going to great lengths to spread its deception and malign influence around the world.”

“This report is the blueprint for bipartisan action Congress and the Administration can take now to address the greatest national and economic security challenge of this generation.”

In May 2020, fifteen U.S. House Representatives formed the CTF to assess the threats the CCP poses. The threats mainly come from six aspects: ideological competition, supply chain security, national security, technology, economics and energy, and competitiveness. The report makes 83 key findings and 430 policy recommendations on how the U.S. can better combat the threat of the CCP.

The CTF conducted an expansive survey of U.S. interests related to China to clarify the scale and urgency of the threat of the CCP’s global behavior and develop a specific and actionable response plan.

The following are excerpts from the report.

“Since the establishment of diplomatic relations with the People’s Republic of China (PRC) more than 40 years ago, the United States has sought to draw the PRC into the community of nations as a responsible stakeholder. U.S. leaders pursued a strategy of engagement based on the assumption that expanding the bilateral economic relationship with the PRC would advance the U.S. national interest and lead the Chinese Communist Party (CCP) to change. This engagement strategy often turned a blind eye to the CCP’s human rights violations, economic malfeasance, expansionist aggression, and empty promises, as well as the CCP’s deep commitment to a hostile Communist ideology that drives this malign behavior. This strategy has, simply put, failed.”

“In just the past year alone, the CCP has violated an international treaty and dismantled Hong Kong’s civil liberties; continued its oppression of ethnic minorities, including Uyghurs and Tibetans; increased its military buildup, conducted increasingly belligerent provocations, and violated other nations’ sovereignty at sea; engaged in fatal skirmishes to conduct a land-grab on the Indian border; and asserted new territorial claims over Bhutan. Moreover, by silencing doctors and suppressing medical information from the world, the CCP allowed a local outbreak of a virus to turn into a global pandemic, killing almost one million people to date and devastating the global economy. This pandemic exposed various U.S. supply chain vulnerabilities, the dangers of U.S. overreliance on the PRC, and the need for a more robust domestic medical and technological manufacturing capacity.”

“This series of wakeup calls has revealed how CCP ideology is undermining the core principles of the international system and putting Americans’ safety and prosperity at risk. Leniency and accommodation of the CCP and its oppressive agenda is no longer an option. To preserve democracy and freedom around the world, the U.S. must act decisively with our allies to regain the initiative."

A key CTF recommendation is to evaluate “whether the CCP’s crimes against Uyghurs amount to genocide, fully implementing sanctions laws enacted in response to the CCP’s Hong Kong crackdown, and taking further specific actions to respond to the full range of CCP human rights violations, from religious freedom violations to forced organ harvesting.”

It also recommends “Coordinating a whole-of-government offensive information statecraft campaign to counter the CCP’s propaganda machine by using truth and our values to undermine CCP’s lies and malign ideology.”

“Ensuring our citizens are aware when they are watching or listening to CCP sponsored and censored media and entertainment content.”

“The U.S. and the free world must understand and accept the reality of the CCP’s loyalty to communist ideology, because it reveals that the CCP can never be a trustworthy partner.”

“The CCP’s obsession with absolute control means that free people and free societies will always be the enemy of the Party.”

“Validating the Goodness of Falun Dafa”