(Minghui.org) Tianti Books and Cafe in Seoul hosted its last Falun Gong 9-Day Intensive Workshops of 2019 from November 26 through December 4. New practitioners shared some of the insights they gained after attending the session. Many of them said that they felt learning Falun Gong is a precious opportunity and must be treasured. Many said that they planned to continue with the practice. 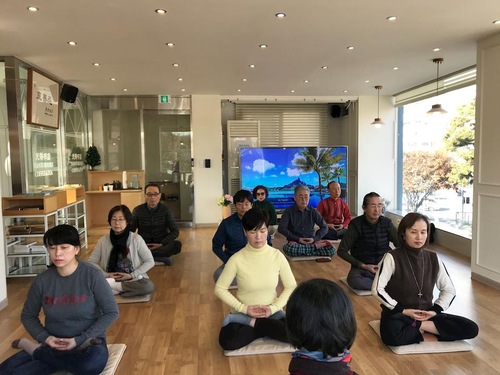 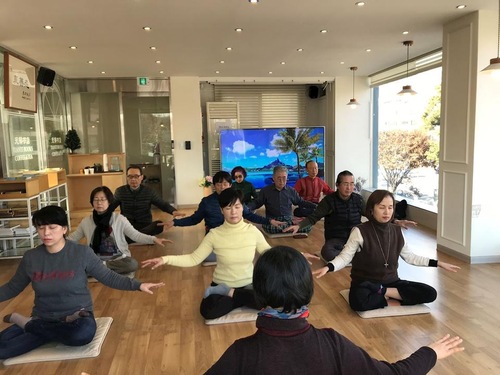 New practitioners learn the fifth set of Falun Gong exercises during the morning session at Tianti Books and Cafe in Seoul. 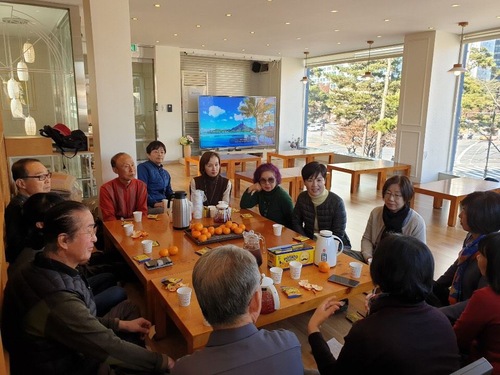 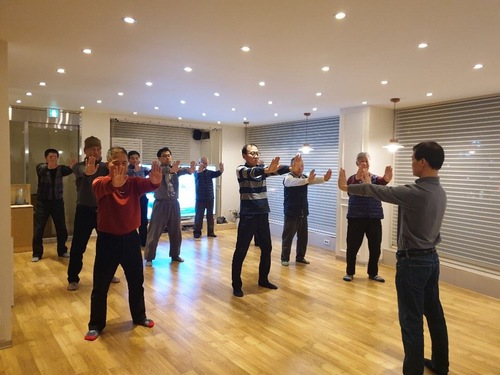 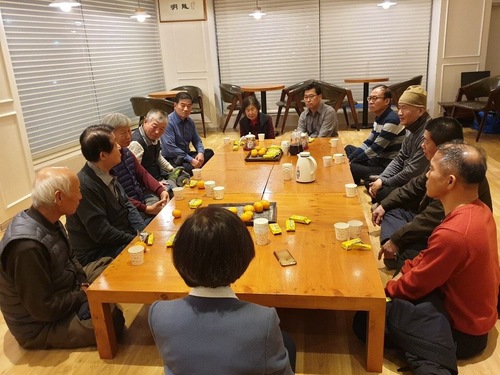 Ms. Pyon is from Goyang in Gyeonggi Province. She saw a video about the persecution of Falun Gong on YouTube last year. She wanted to learn more about why Falun Gong was persecuted and more about Falun Gong.

She then met up with a college classmate who told her how Falun Gong had saved her life. The next day her classmate gave her a Falun Gong book and an introduction booklet. She finished reading the book, Zhuan Falun, without stopping, and started going to a group practice site to learn the Falun Gong exercises.

Ms. Pyon had suffered from spinal stenosis which caused her great fatigue and numbness in her left leg. “When I did the sitting meditation on the third day, my back was painful like it was being stabbed with a knife. But I did not stop doing the exercise. I finished doing the meditation the next day with less pain. My legs were also sore and painful. I did not feel much discomfort in the following days,” she said.

She said that since she learned Falun Gong she sleeps very well. During the six months prior to practicing Falun Gong, she had fasted and taken medicine because of a digestion problem. Even without eating much food, she had to take medicine to assist digestion. Since taking up Falun Gong, her stomach and intestines no longer give her any trouble.

She said that while she participated in the nine-day workshop, two issues she had been facing were resolved, one financial and the other one involving her sibling.

“Because my xinxing has become better, my previous issues are all gone,” Ms. Pyon said, “I can feel the surrounding environment changing as the state of my xinxing changes. Even if I do not do anything, the environment is getting better because of my character improvement.”

Ms. Choi is in her 50s and comes from Gyeonggi-do Province. She had suffered from a spinal disease for 30 years and had tried various treatments to ease her suffering.

To make matters worse, she was in a car accident and was hospitalized for two weeks. The accident had caused injury to her chest and she had pain in her back.

Ms. Choi's back pain was gone after she did the Falun Gong exercises for the first time. She was released from hospital one week later and has been going to a group practice site near her home to do the exercises ever since.

She said older photos of her showed that her spine had been curved like a disabled person. Recently, her spine has stretched a lot.

Ms. Choi does spine exercises every day. She said that when she stood up after doing spine stretching exercises, her bones would crunch loudly. But she felt her spine had became soft. Since taking up Falun Gong, her spine has improved a lot.

The other attendees who participated in the nine-day workshop also said that Ms. Choi sat upright while doing the sitting meditation.

“The Dafa book mentioned that many people had suffered a lot in order to learn Falun Gong. I also come here after a lot of hardship,” Choi said, sobbing.

Mr. Han from Chungnam-do has been an art teacher in a middle school for 26 years. He was diagnosed with cancer this year and is on sick leave following surgery to remove the cancer. His friend Ms. Lee Jung-rim from Gyeonggi-do, a painting artist, also had cancer.

His brother introduced Falun Gong to him last year and asked him to read Zhuan Falun. Mr. Had struggled to read one lecture and then did not continue.

After he was diagnosed with cancer, Mr. Han said his brother had told him to recite “Falun Dafa is good” and “Truthfulness-Compassion-Forbearance is good.” So he recited these words as he headed into surgery. The operation was successful. During his hospitalization after the surgery, he listened to audio recordings of Master Li’s teachings and read Falun Gong books.

Ms. Lee said that she also got a Falun Gong book from Mr. Han’s brother when she was receiving treatment for cancer last year. She read only a little and did not continue.

When she heard that Mr. Han was diagnosed with cancer in September, Ms. Lee told him, “We must start practicing Falun Gong now.” They then set their minds on learning Falun Gong.

She said that with guidance from Mr. Han’s brother, the three of them finished reading Zhuan Falun in three days. She then also read other Falun Gong books.

She said, “These books are very interesting. I finished them quickly by reading from morning to evening. Now I am still reading these books and still feel they are interesting to read.”

Ms. Lee started practicing the exercises in mid-September at home. She said her chronic headaches have stopped and her health has improved a lot.

Ms. O from Gyeonggi said her mother had called her on October 23 and asked her to search for information about Falun Dafa online. After browsing the internet and reading some websites she felt, “This is what I have been seeking!”

She went to a group practice site on October 26 to learn the exercises. She also finished reading Zhuan Falun without stopping. She has since continued to read the book and do the exercises daily.

Ms. O said that she had passed out five years ago when she was ill and had experienced many extraordinary things. At that time, she saw herself in another dimension and she flew up like a fairy. She enlightened that our lives are insignificant in the grand scheme of things. She has had a total of five near-death experiences.

After practicing Falun Gong for just a few days, Ms. O and her mother participated in a South Korean Falun Dafa cultivation experience sharing conference. She said attending the conference that she could feel that this group is different. She saw that the practitioners cooperated well with each other, and the conference went very smoothly.

“It is hard for one to start practicing Falun Gong without suffering great difficulties.” Ms. O said, “I experienced five near-death experiences before. I feel that we must treasure the opportunity to practice Falun Gong.”

Ms. O was the last practitioner to talk about her experiences for the day. Her sharing was echoed by the others on site. They expressed that Falun Gong is precious and they would practice it diligently.

Tianti Books and Cafe in Seoul holds free nine-day workshops every month. There are two shifts: morning and evening. The next session will be held on January 14, 2020. The bookstore's telephone number is 02-504-0860.