(Minghui.org) Today's news from China includes incidents of persecution that took place in 5 cities or counties in 4provinces, where at least 13 practitioners were recently persecuted for their belief. 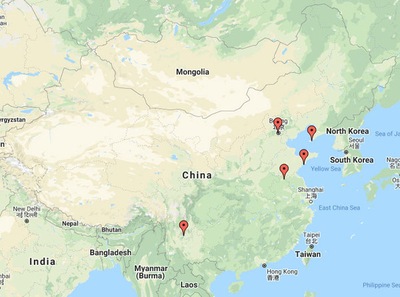 Ms. Zhang Yuying, 68, disappeared on October 1, 2019. It was later found out that she had been sentenced to a ten-year prison term.

Ms. Wang Xinyin is being held in Xuzhou Detention Center.

Mr. Jin Yongxin is incarcerated in the 11th Ward of Jinan Men’s Prison. Inmates Ren Qiang, Song Weiguang, and others have abused him.

Guards ordered an inmate, who has an infectious liver disease, to sleep beside him. They brag that the Chinese Communist Party allows 5% death rate of Falun Gong practitioners in prison.

Ms. Ma Junfang was arrested by officers from Jiaowangzhuang Police Station on January 9, 2020.

Ms. Yu Yinghua, 70, was arrested on July 10, 2019. Her home was ransacked. She has been held in a detention center, and her health has deteriorated. Her blood pressure remains high. She frequently suffers from dizziness and nausea.

Ms. Wang Juzhen was arrested at home on December 12, 2019. Her home was ransacked, and her properties were confiscated. She was interrogated in the police department, forced to sign their documents and have her fingerprints taken.

Ms. Wang was detained for 15 days.