(Minghui.org) From the far East to Europe to North America, audiences across the globe are echoing profound appreciation for the artistry and message of Shen Yun Performing Arts.

Shen Yun's touring companies have wrapped up performances in three cities in Japan, two cities in Italy, one city in the United Kingdom, and four cities across the United States from January 13–19, 2020. 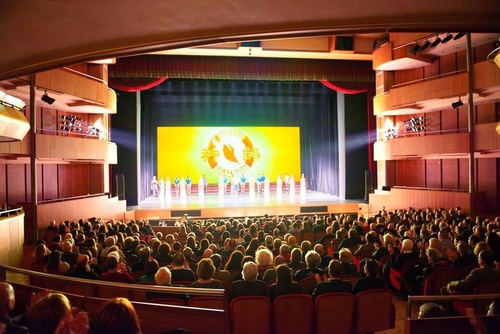 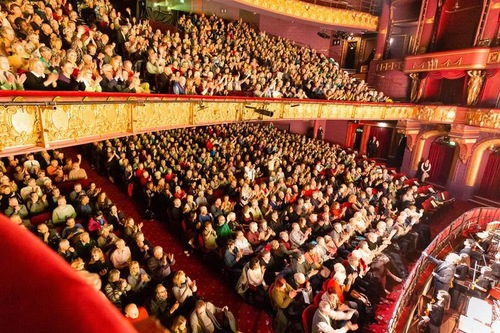 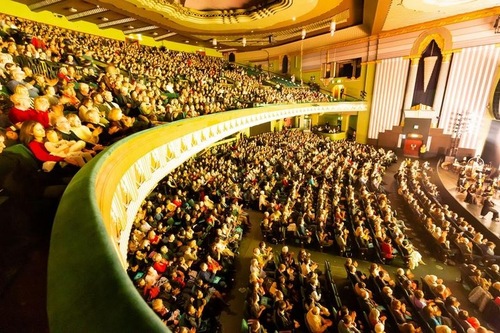 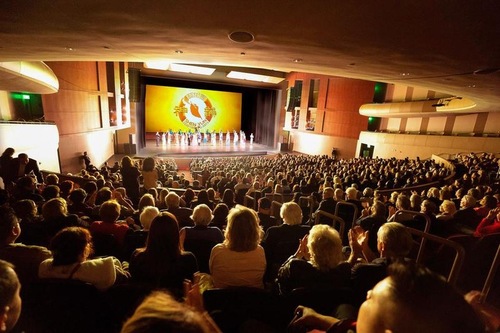 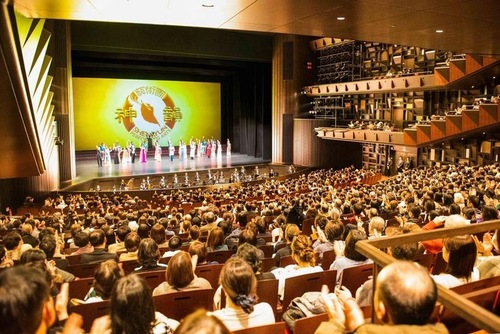 “A Real Feast for the Eyes” 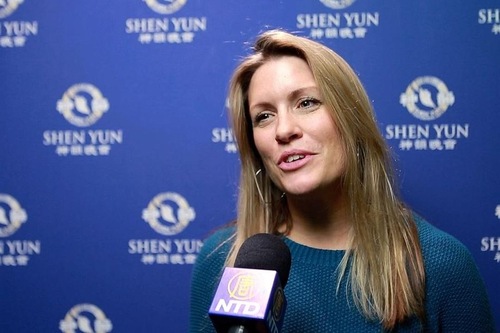 “Absolutely spectacular! And it’s absolutely beautiful. Very colorful. Everything is a real feast for the eyes... Just a real powerful, moving, colorful, spectacular performance,” she said.

“The performers, they’ve got such an array of talent. So they’re not just dancers. They’re actors, they’re acrobats, they’re so expressive. There’s lots of feelings involved, and that comes across. And that’s a real talent to be able to do that.

“I actually got a little bit teary at one point ... I get quite emotional sometimes at the spectacle of it all and how gorgeous all the dancers are. They’re so dainty and they move so fluidly. They move like water along the stage and it’s so lovely to watch. So elegant. So flexible!

“You can’t help but get swept up with it all. It makes me want to learn to dance myself. I’m thinking how can I make myself more like them! Maybe I’ll take up some Chinese dance classes.

“I think it brings more awareness and more, kind of light and grace and elegance and faith. It kind of brings all that pureness. You get so caught up in your busy lives and it just kind of brings an air of grace to everyone in the audience. So I think everyone is going to leave feeling empowered and at peace maybe when they go. It’s a lovely experience,” Ms. Taylor concluded.

“I Have Been Inspired” 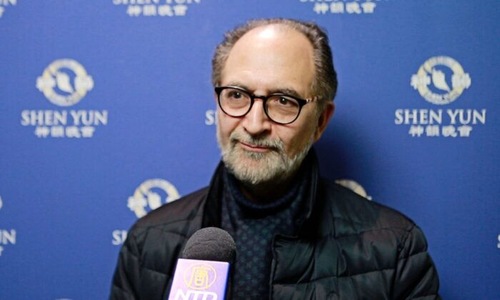 “It’s very nicely composed. Very synchronized. The music is very accessible and well-orchestrated. It’s lovely, and altogether it’s very vibrant and happy, energetic music which I like very much,” he said.

“The music accompanies quite nicely—sometimes in service of the dances, sometimes on its own. It’s quite astonishing.

“I loved the fact that traditional instruments of China, of that part of the world, are used. The combination of the orchestration is lovely... West and East are both playing a part. A Westernized orchestra and traditional music together—that’s used very nicely and wisely.

“It made me think maybe I’ll [compose] something on a smaller scale, on the same line maybe, yes. Definitely, I have been inspired.

“Before anything else, I think it’s entertainment for the eyes... That’s all very entertaining. Makes you think that no matter what culture you come from, maybe you can think it’s exactly the same sort of ... Brings the same sort of mentality into your culture, or think it over and share it with others,” Mr. Behzad said. 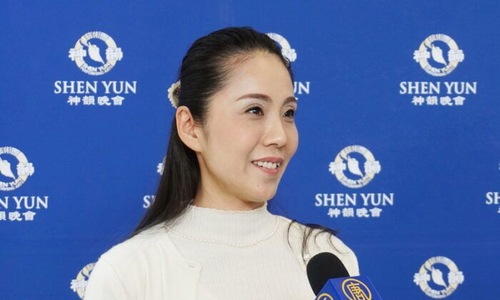 “Without speaking and having only dance moves, the dancers were able to communicate what they wanted to express. This is a high-level art performance,” she said.

“The body movements of the male dancers are very masculine. Their jumps, backflips, and leaps are done with such skill,” Ms. Megumi noted.

She also remarked on how the hands, feet, and all the other gestures of the female dancers were done with such “beauty and delicacy.” 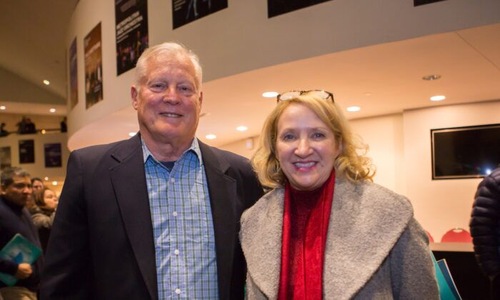 Cindy Gingrich and Stuart Cambridge enjoyed Shen Yun Performing Arts at the George Mason Center for the Arts on January 18.

Cindy Gingrich, a consultant for project management, and Stuart Cambridge, who formerly worked for the Coast Guard, saw Shen Yun at the George Mason Center for the Arts in Fairfax, Virginia, on January 18, 2020.

“Just life-changing, really, truly,” Ms. Gingrich said. “It is the most beautiful show I’ve ever seen. Aesthetically beautiful, and spiritually.”

“I love that [Shen Yun is] bringing the beauty of the culture out even though that regime is in charge. It’s amazing that they can show us all the good things throughout their entire history,” she said.

“It wasn’t like anything I anticipated,” Mr. Cambridge said. “They’re just fantastic that they were able to put those stories to dance. Wonderful!”

He said the traditional values Shen Yun displays in the performance, such as courage, loyalty, and compassion, “helps us understand. It helps everybody,” he said.

'Went Right to My Heart' 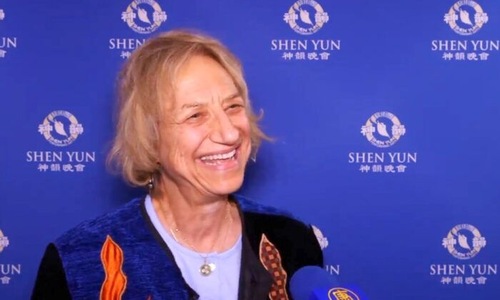 Singer-songwriter Kris Miller attended Shen Yun's performance at the California Center for the Arts in Escondido on January 19, 2020.

“Shen Yun’s music is very touching. It went right to my heart. It’s bringing the heart and the mind together and it is a soulful sound,” she said.

“I love it. I start crying because ... It’s in my soul. It’s ancient. So when I heard it I start to flood with tears of joy because when I was young, I wanted to play that kind of instrument. But I couldn’t find any around. I tried to make one but it didn’t work.

“I’ve always been attracted to that style of music ... In fact, I can play that kind of scale in my mind. It’s been intuitive for me. I’m so impressed because they’re bringing in the spirit and the divine inside of the music, as my heart. So seeing the movement inside of the sound just hits the mark. It brings the heart and the mind together in a beautiful presentation.

“The singers were amazing. The voices, they are celestial. It’s as close as you can get to being an angel in a body. And the beautiful images of singing and what was happening is really cryptic to where we are at on this planet. Because the old is going out and the new is being made new. And God is coming to earth, and it’s just gorgeous.

“I love the story [about heavenly beings coming to earth] because it’s an archetype. It's just like the Bible, right? Coming through the clouds and all the angels and that’s who we are really, really are. Everybody just fell asleep, but we are fallen angels. We are all waking up now. And the good people are waking up to bring peace on earth.

“There is an orchestration that’s happening on this planet as one set of people are destroying things, and there is a set of really good people that are rising up and using music, and song, and dance to heal the world,” Ms. Miller said.