(Minghui.org) New York-based Shen Yun Performing Arts continued its 2020 world tour with performances in Canada, Japan, Italy, the United Kingdom, and the United States during the second week of January. 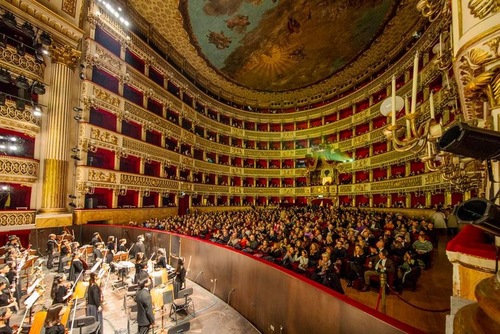 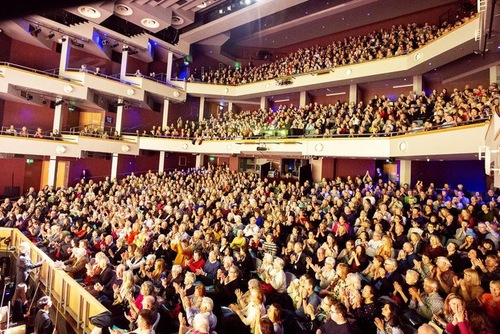 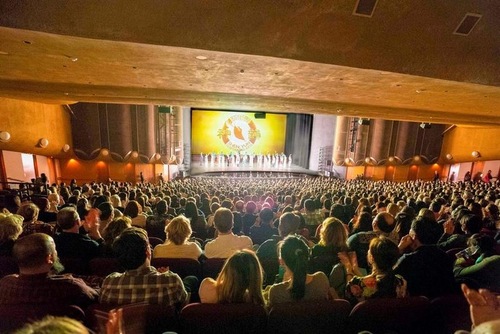 The Shen Yun Global Company returned to the Center for the Performing Arts in San Jose, California, and presented three sold-out performances January 11–12, 2020. 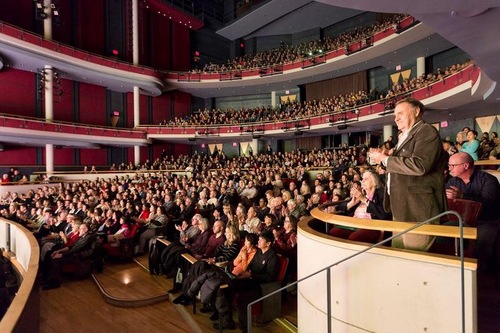 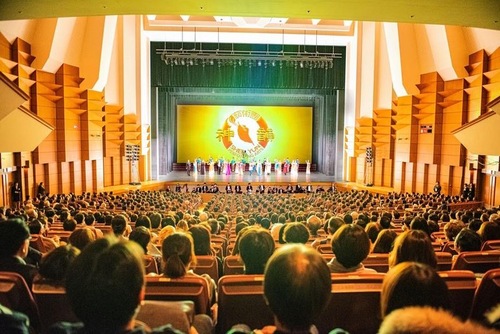 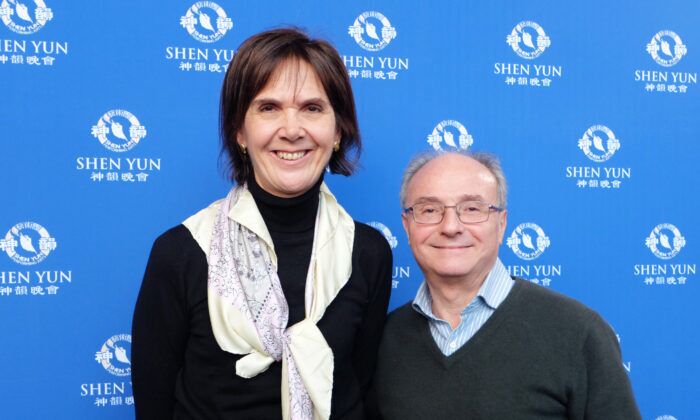 Tullio Guma, Italy's former consul general in Toronto, and his wife Dana at the Living Arts Centre in Mississauga, Canada, on January 12, 2020.

“[Shen Yun artists] are the real ambassadors of the huge Chinese culture, and Chinese culture abroad, and in the whole world, so they also should feel this responsibility, which is very important,” he said.

“The lightness of the movements, of the dancers—they are really perfect I would say. All the choreography was great. And the music, of course. The orchestra is fantastic.

“I understand the meaning of this show. It is very important to transmit—to the younger generations and also to foreign people—the traditional values, the immortal, eternal values... 5,000 years from now, some values will still be important, and that is, I think, the goal of [Shen Yun’s] initiative.

“I think that there are some universal values, no matter if you are in the Eastern world or the Western world. They are, of course, peace, love, determination in trying to achieve something.

“They get perfection, that I noticed. These dancers achieved it. They are very young, but they have made a lot of sacrifices to reach this form of art. They are really excellent.

“I think that they should have an inner concentration that brings them very close to God, performing at such a fantastic level.

“This show gave me a sort of serenity and happiness. It fits very well, the dance, the music, everything. I think that the delicateness is the best thing that I noticed. Also, the stories are very, very moving,” Mr. Guma added.

'A Lot of Positive Energy' 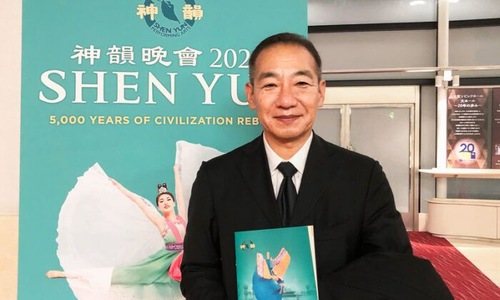 Hagiwara Yasunobu, board director of Biketsu Life Company Limited, saw Shen Yun in Tokyo, Japan, on the evening of January 11, 2020.

Hagiwara Yasunobu, the board director of Biketsu Life Company Limited, saw Shen Yun at the Bunkyo Civic Hall in Tokyo, Japan, on January 11, 2020.

“Really spectacular... I feel a strong energy moving into my body... It’s a kind of feeling that mere words cannot clearly describe,” he said.

“I started my new career this year, and I was worried about my own future. At this juncture, as I watched Shen Yun, it gave me a lot of positive energy... I am really thankful.

“I was truly moved. At the moment the curtain went up, I was truly excited, as if my entire body had got an electric shock. It was beyond my imagination... The backdrops on the stage are so beautiful and amazing.

“It takes courage to clearly impart the notion of how to discern good from evil, and virtue from vice... I didn’t know about the persecution [of Falun Gong]. I think it is lamentable... It takes firm determination and tremendous courage for Shen Yun to spread this message in the form of performing arts.

“I perceived the [celestial] world that cannot be seen by ordinary people... It was so magnificent that I was very excited and happy,” Mr. Yasunobu said.

'Beyond Anything I Could Have Imagined' 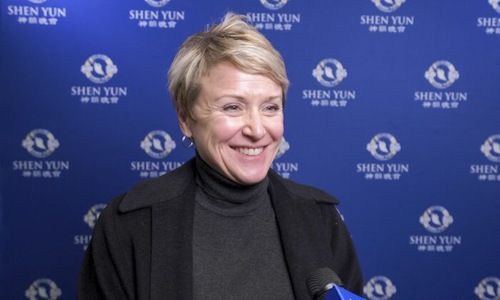 “It’s beyond anything I could have imagined... The artistry, the athleticism, the beauty, the way they use their costumes, and the sleeve dance, and the colors,” she said.

“The orchestra—I love the blending of the Eastern and Western cultures. It’s just so astounding.

“The fact that it was bringing in sort of the physical, what the dancers were doing, but also visually what the projections were bringing out, it sort of transformed it into this whole other plane.

“It’s a crazy world we live in, and I think we all need to remember that at heart we’re all the same... To keep your culture is so important because you don’t want to lose that part of what makes each culture unique. The love of that can just radiate outwards,” Ms. Damiano said.

'Helps Us Build a Brotherhood' 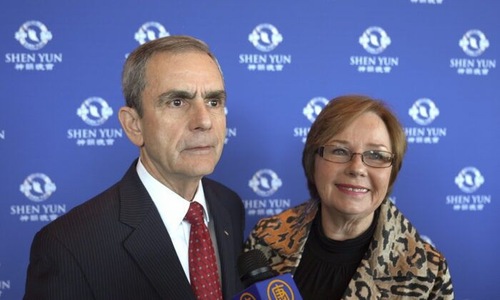 “I’ve enjoyed it very much, both from a physical activity, the dance, the music and the beauty of it. And then the stories that go with it. There are stories that we can all relate to. Very moving,” Mr. Ellis said.

“I believe that we’re all created by God. And that we have a purpose here on this earth. And that helps me live the kind of life that I want to live.

“Very, very powerful because it causes you to think about who you are, what your purpose is. And how do we deal with life on this earth? With the hope for the future.

“None of us are perfect. We need to live together and build a better world and accept each other that are different... We all have things in common, and it helps us build a brotherhood.

“[Shen Yun] helps us understand others and their history and how their history has impacted them and how it impacts us. But it really shows to me a lot of unity, the unity in the world,” he said. 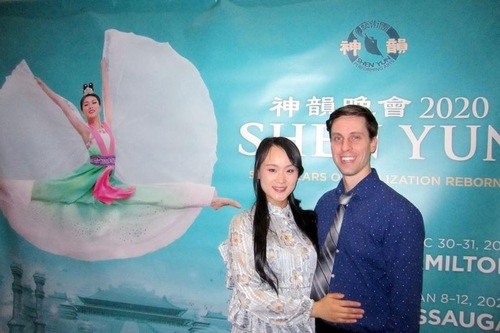 “Very emotional and stunned. I absolutely know the exhausting hard work and practice of the performers behind the stage,” she said.

“Shen Yun performers' foundations are very solid ... The technical skills, bearing, and form are all very authentic. This requires very strong perseverance and faith to continue ... This is based on their love for traditional Chinese culture.

She said Shen Yun performers differ from regular performers in having “the depth of cultivation and inner purity and beauty.”

She would like to say to the performers, “You danced so well. You work really hard. I admire you from the bottom of my heart. It really is great.”

“My Cultivation Story: Being Tempered by Tests of My Faith”