In Zhuan Falun, Australians Find the Truth of Life

(Minghui.org) Falun Dafa is a meditation system introduced to the public by Mr. Li Hongzhi in May 1992. The main teachings are found in the book Zhuan Falun, which is currently available in 40 languages and has been read by over 100 million people. 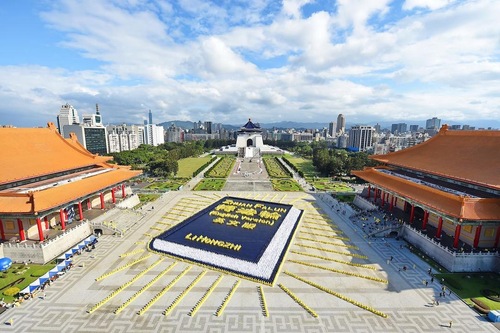 Image of Zhuan Falun formed by about 5,400 Falun Dafa practitioners at Liberty Square in Taipei on November 24, 2018

The popularity of Falun Dafa in Australia started in August 1996, when Mr. Li delivered a lecture in Sydney. Below are stories of several Australians about how this practice improved their minds and bodies.

English Teacher: A New Me 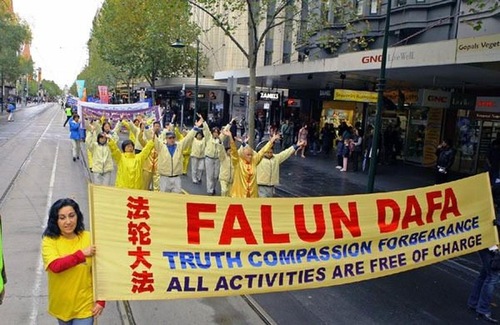 Cansin Goldring (left) in a parade in downtown Melbourne

Cansin Goldring, who teaches English at a language school, began to read Zhuan Falun 18 years ago. Before that, she always had many questions about mankind and the universe. For example, she wondered why people die and where they go afterwards, why some people are lucky and others less fortunate. These questions bothered her until she read Zhuan Falun. “I feel so happy and no longer wish to possess things like I used to, such as luxury cars, big houses, amazing vacations,” she said. “This is because I know, if I just manage to be kind, compassionate and truthful, the universe will give me everything I need.”

The miracles started when she read Zhuan Falun for the first time and made up her mind to quit smoking. It was not an easy decision, given her addiction. Despite her heart diseases, she never thought she could do this. “After reading Zhuan Falun a few times, I stopped smoking, and for 18 years I never felt the urge to start again,” she added. The health benefits she experienced after taking up Falun Dafa were enormous. She became healthier, happier, and no longer needed to see a doctor.

Another benefit related to her son. “He told me,” she said, “I became a different mother—in a good way, because I no longer got angry with him over small things.” She also stopped telling him to fight back or seek revenge when being bullied. Instead, she explained how a Falun Dafa practitioner would handle such issues. She also said, “My son said I had become much calmer.”

Curious about the book, the 8-year-old often asked his mother to read the book to him instead of bedtime story books. Nineteen years have passed, and he has no idea what alcohol tastes like, nor has he tried smoking. Instead, he follows the principles of Truthfulness-Compassion-Forbearance described in Zhuan Falun.

Her son, now 27, is a successful businessman. “I have not seen my son getting angry, upset or discontent with anything due to his early immersion into Zhuan Falun. As a mother, nothing can be more rewarding than this,” she said.

Why is this book so powerful? It is actually quite simple, Goldring explained: “Every night when I started to read Zhuan Falun, I began evaluating my behavior as being good or bad. It reminds me that I should be kind, I should be truthful, and I should be tolerant.” It is not easy to always do things like that. “There have been times I did not follow these principles and got into trouble with my bosses or colleagues. Then, I pick up the book and start reading. At that moment, I feel secure and happy, noticing my mistakes and becoming a better person,” she recalled.

Goldring said the Dafa books help one to become more kind, compassionate, and truthful. “It is my greatest friend and my guidance to kindness. It is my strength in this complicated environment, which is full of unexpected troubles,” she said. “You become wise, calm, and content.”

She is very grateful for having come across this practice. “The changes Falun Dafa has made in my son and me are countless and beyond words to describe it,” she said. “We are thankful to Master Li for his teachings imparted in the book. I will certainly keep reading Zhuan Falun for the rest of my life. Because I would not like to be the person I was before reading the book.”

Desmond Ford and his wife own a natural therapy clinic, and they came across all kinds of methods for improving health and well-being.

“One day,” said Ford, “a customer gave my wife a gift—the book Zhuan Falun. Neither my wife nor I wanted to put it down. Suffice to say we both read it from cover to cover by the second day.”

Both having grown up in traditional Catholic families, he and his wife were always curious about spiritual guidance.

“In my case, I had a very deep and unfulfilled yearning for ‘something’—in other words, I knew there was some significant purpose in each and every life. But, so far, I had only experienced just enough to keep me searching.” As a result, he kept exploring and trying to improve himself, since he knew he was not perfect.

It was a long, arduous journey. Many years passed, yet he only experienced losses. He had no choice but to give up. Still, he waited, although he did not know when, if ever, it would come.

Then the book of Zhuan Falun arrived. “My habit with such books was to speed read a page here and there and more often than not reject it as I just knew the answer was not there,” said Ford. “But, with Zhuan Falun it was immediately different,” he said, adding that the profoundness of the book was astonishing. “Things that I had never seen articulated in any manner before, things that I knew but did not know that I knew, were all laid out there so clearly.”

He read Zhuan Falun every day over the past 20 years and could even recite some sections. “I discovered that the root of all my problems was selfishness—a preoccupation with self. It goes—Me! Me! Me! —first and foremost before all else. It is all unconscious and goes with me, controlling me throughout my life.” Through continued study of Zhuan Falun, he learned to look inside himself to find the root of each and every problem.

“Now,” he said, “I understand that there are only three questions to ask myself based on the principles Master Li teaches: Am I truthful? Am I thinking of others before myself? Can I forbear? Truth, Compassion and Forbearance are the secret of life,” he concluded. 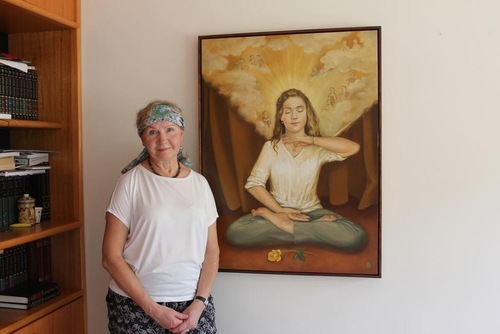 Barbara Shafer, a Polish Australian artist, still remembers the accident very well. It was November 11, 2003, and she was repairing a church mural. Somehow she fell from the 7-meter-tall scaffolding. Her head hit the ground. “With my skull broken into three pieces, nose smashed, knees and hands having had a comminuted fracture, I was on the verge of death. Doctors said there was zero chance of recovery,” Shafer recalled.

She survived the surgeries and had stitches from head to toe, including seven stitches in her face. “I was like a robot with broken parts,” she said. Many reinforcing metal plates, screws, and nuts were installed inside her body. All her teeth were stabilized with metal wires. Her two eyes looked in different directions, and her left ear was deaf. Her left hand was numb, and she heard constant, machine-like noises in her head.

On top of extreme pain, she began to suffer memory loss. Even after two more surgeries, spinal fluid still came out from the back of her throat.

Seeing her struggling with no hope, a friend recommended that she study Falun Dafa. When she read Zhuan Falun the first time, she tried hard to focus her eyesight on the book, and it was still blurry. “But, I did not give up,” recalled Shafer. “The next day, I noticed my eyesight had improved, allowing me to finish the first lecture.” Then, she read the next lecture and so on—she was drawn to the content.

On the third day, something unusual happened: “I felt a strong energy moving up from my fingers along my arms—like an electric current, and it took away all problems, including pain, complications after the surgery, spinal fluid, and so on,” she recalled. “Even the noise in my head, the constant sound like a machine running, was gone, and it never came back.”

Four months after beginning to practice Falun Dafa, Shafer returned to the scaffolding and was able to do the work she really loves. Not only were her injuries related to the accident cured, but her previous health issues also disappeared, including digestive problems, migraines, and allergies.

Furthermore, her mental improvement was also dramatic. She no longer suffered from anxiety or depression. People around her said she became more considerate and displayed a peaceful mind.

Looking back at what she had been through, Shafer is very touched and grateful. “I believe that Zhuan Falun is the ultimate truth—this is the truth that people have been waiting for for many, many years,” she said.

She hopes more people will practice Falun Dafa and benefit from it. She is especially thankful to Master Li for all she experienced. “To me, Falun Dafa is the hope for humanity given by heaven in the declining period of our civilization.”