(Minghui.org) Falun Gong practitioners participated in the first Celebrate America Parade held on the Boardwalk in Atlantic City, New Jersey on September 7, 2019. Many floats and bands were in the parade. The practitioners demonstrated the Falun Gong exercises, and played the waist drums in the parade, winning acclamation from the spectators. 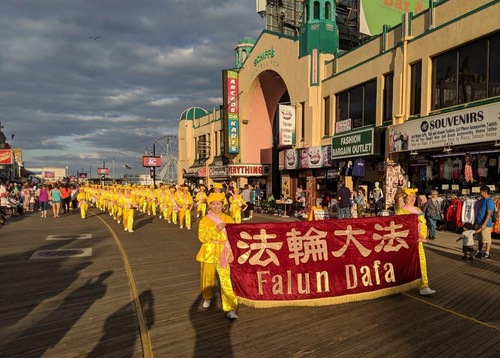 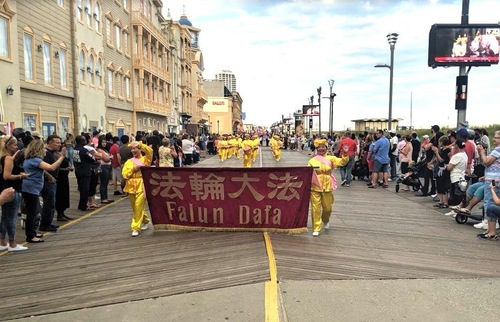 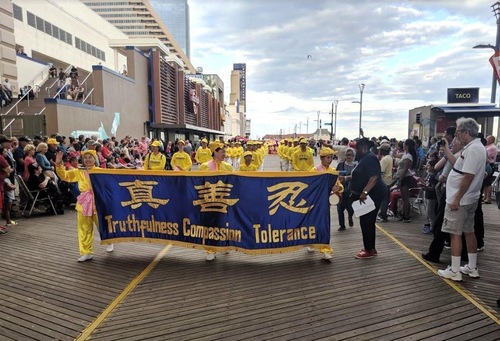 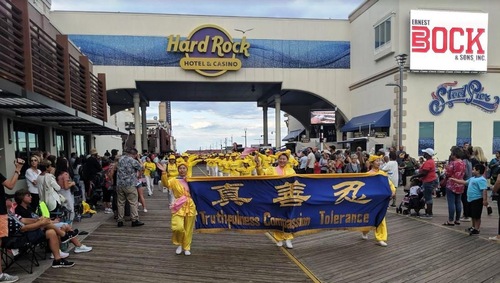 The parade was held on the Boardwalk, starting at Metropolitan Avenue and ending at Arkansas Avenue, a distance of 1.4 miles.

The Falun Gong waist drum team, wearing their traditional costumes, performed a rendition of Falun Dafa is good, Jubilation, and more, and were well-rehearsed. Their music was resounding and brought a smile to the onlookers faces. Tourists on both sides of the Boardwalk took pictures with their mobile phones, applauded, and cheered. Some spectators shouted, “Beautiful, I love you.”

The audience response was enthusiastic. When the waist drum team marched by, one man rushed forward excitedly, shook the hand of a practitioner who was holding the banner worded “Falun Dafa” in front of the team, and said, “Falun Dafa, Falun Dafa.”

Another man had his thumbs up to express his appreciation. He also drew a sketch of a thumb and gave it to the drum players. When the practitioners demonstrated the exercises in the parade, many viewers on both sides imitated their hand gestures. 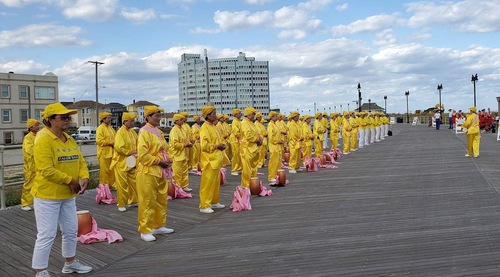 Practitioners did the exercises as a group before the parade.

The practitioners held a group exercise practice before the parade. The melodious music and graceful exercise movements drew the attention of passersby. One passerby said, “These are kind and peaceful people.”

Practitioner Li, the person-in-charge of the waist drum team, said that the team was set up in 2003. It is somewhat famous in Greater New York, as the team often participates in community parades. It also participates in parades in Long Island, New Jersey, Connecticut, and Pennsylvania.

Falun Gong was first taught to the public in 1992. Nearly 100 million people across China were soon practicing Falun Gong after experiencing improvements in their health and character. Jiang Zemin, former head of the Chinese Communist Party (CCP), perceived the spiritual discipline's growing popularity as a threat to the CCP's atheistic ideology, and issued an order to ban Falun Gong on July 20, 1999.

Minghui.org has confirmed the deaths of thousands of Falun Gong practitioners in the persecution over the past 20 years. However, the actual number is suspected to be much higher. More have been imprisoned and tortured for their faith.