Chicago: Practitioners Learn from Each Other During Mid-U.S. Falun Dafa Experience-Sharing Conference

(Minghui.org) The 2019 Mid-U.S. Falun Dafa Experience Sharing Conference was held in Chicago, Illinois on August 4, 2019. Nineteen practitioners talked about how they benefited from the practice and opposed the persecution over the past 20 years through raising awareness about Falun Dafa and exposing the brutality of the persecution in China. 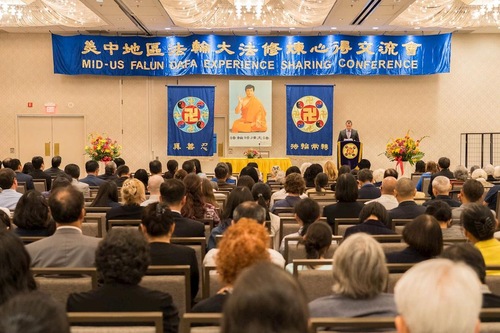 The 2019 Mid-U.S. Falun Dafa Experience Sharing Conference was held in Chicago on August 4, 2019. 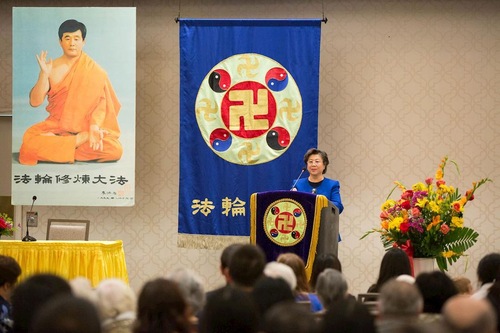 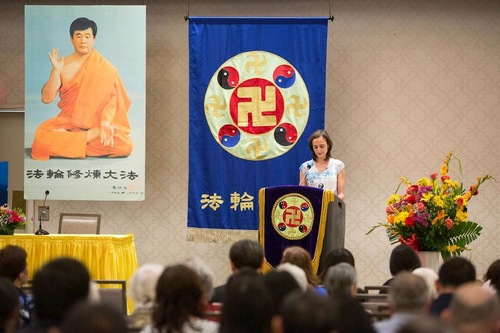 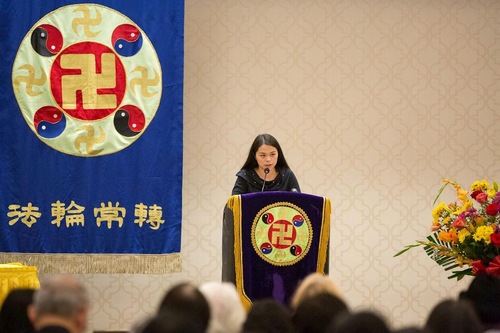 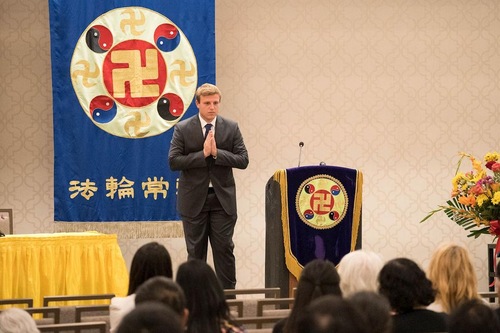 Nineteen practitioners talked about their cultivation experiences during the conference.

Ms. Lu from Ohio discussed how she has clarified the truth over the past 20 years. She has contacted government officials, told them about Falun Dafa and addressed the Chinese Communist Party's (CCP) propaganda against the practice. “When the persecution first began, I had a dream in which other practitioners and I were in a large field filled with countless large, muddy ponds. Each of us was responsible for one pond and we stood at edge of the ponds and helped rescue people,” she said. She helped a congressman and his wife, and she told them about Falun Dafa.

“From this dream I understood that clarifying the truth to elected officials was my mission. I needed to help them, and the people they represent, have a good future,” she added. One time, she needed to meet two Congressmen about an urgent matter. At that time she had illness symptoms and was running a fever, but she decided to go see them anyway. On the plane to Washington D.C., she noticed that the two Congressmen she intended to meet were seated close to her—one in front, and the other behind her. She handed them the letters and made appointments to meet them in their offices. “From this I learned that when I am able to overcome difficulty and remain determined, Master helps us and makes the best arrangement,” she explained.

Ms. Shang, who lives in a small city in Illinois, decided to tell the Chinese people about Falun Dafa and debunk the CCP's defamatory propaganda. She began making phone calls to China. “When I prepared to make my first phone call, I felt very cold. I was so nervous I thought my heart would jump out of my chest,” she recalled. “Although I had prepared what I'd say in advance, I could not speak fluently.” When discussing with other practitioners afterwards, she realized that the interference came from attachments and human notions, something she needed to work on and eliminate.

As Ms. Shang overcame her negative thoughts, she also identified other attachments such as zealotry. She continued working on eliminating her attachments and improved dramatically, both in her truth-clarification skills and her xinxing. She recently began training others on how to make phone calls to China to help save people.

Annie Chen, 23, from Michigan said she began practicing with her mother when she was 2 years old. “For young people today, there are many distractions such as good food and having fun with friends. These distractions prevent us from being diligent in cultivation and participating in truth-clarification activities,” she said. She explained that these bad influences continue in college, including drinking alcohol, addiction to social media, sex, entertainment, and defiance of tradition. Annie said that after most young practitioners graduate from college, they pursue reputation, high salaries, and successful careers. They are too busy to work on Dafa projects. When she read Master’s most recent lecture, she felt bad.

“It seems that young people tend to have ambitions in life that are unrealistically high, so they might have a hard time settling down with what they do.” (“Fa Teaching at the 2019 New York Fa Conference”)

“I know that Master does not differentiate between practitioners based on age or our length of cultivation practice,” she continued. “Although I am relatively young, I am still a Dafa disciple and I cannot make excuses for myself saying I'm too busy or too young. As a Dafa disciple, I have to do the three things well and meet the standard.” Therefore, Annie took on more projects and let go of her attachments to laziness and seeking comfort.

Kelly Gao from Indiana began practicing with her mother in China when she was 3 years old. After the persecution started, she gradually stopped. When she went overseas for study in 2016, she resumed practicing and finally understood what it meant to genuinely cultivate. She talked about how she connected to her true self through eliminating thought karma, improved her xinxing by practicing forbearance, and how she overcame illness tribulations. “I preferred to talk to Westerners about the persecution. I avoided Chinese people because I had fear and I was afraid of losing face since they were poisoned by the CCP propaganda and might refuse to listen,” she explained. When she remembered how practitioners in China have suffered tremendously, she felt bad. She started to go to tourist sites and work with other practitioners so she could learn how to do a better job of clarifying the truth to visitors from China. “I could feel that Master has been supporting me and enlightening me. When I had righteous thoughts or was willing to do well, Master always helped me to do better. I am so grateful,” Kelly said.

“Something I Have Been Waiting for”

Several practitioners talked about how they first learned about Falun Dafa as well as their cultivation journey. Rick Campbell from Missouri said he looked into many Christian sects and oriental culture. Noticing some of the sects were not righteous, he became discouraged and decided to stop looking.

“Soon after, I saw a video in which there were Falun Dafa practitioners meditating. Although it only lasted about 10 seconds, "It really caught my attention,” he recalled. He searched for Falun Dafa online and purchased a copy of Zhuan Falun. Because of his previous experiences, he was very cautious at first. He was always able to find major loopholes in every religion or sect he had previously looked into. He kept reading the Falun Dafa teachings, and said, “After one year, I realized Falun Dafa is special—different from anything I had known previously and this is the truth.”

Rick explained that cultivation practice is not easy. Although the progress was slow, he did make progress. “In the past few months, I paid more attention to improving xinxing and moral character,” he said, “I have walked a long journey until I found Falun Dafa four years ago. I know Falun Dafa is the best. And there are many aspects I have to do better with to assimilate myself to Dafa.”

Inna Shelley, an attorney from Ohio, first heard about Falun Dafa in 2007 when she was a law student. “One day my mother took a train and a practitioner told her about Falun Dafa. She was impressed by the health benefits and recommended it to me,” she said. Inna enjoyed reading the book Zhuan Falun and learned the exercises online by herself. When she was sick at home and could not go to school, she joined the group Fa-study a few times. She liked doing the exercises, but did not quite understand what cultivation was. “I was attached to my illness, so I did not enlighten to deeper meanings in the Fa,” she recalled. Several months later, she stopping going to the group practice.

In February 2014, Inna decided to read Zhuan Falun again. “This time, I felt as if a door that has been closed for a long time suddenly opened, and I finally realized how precious Falun Dafa is,” she explained. “Zhuan Falun is a ladder to the divine, and it can help improve me both internally and externally.” She understood that illness comes from karma, and for practitioners it offers opportunities to improve one’s xinxing. “I was so thankful that I had a second chance to practice this—something I have been waiting for. I also regret the time I have wasted since stopping practicing in 2007. I decided to work harder and make up for lost time,” she added.

Reminders to Look Within

Ms. Mao from Missouri talked about how she was reminded to look inward. “Because I did not look within, I fell and there were two big bumps on my head,” she said. When she participated in events in Washington D.C. this July, she felt unsettled after a practitioner said she lacked righteous thoughts. Ms. Mao participated in the parade in D.C. this year, but her thoughts were filled with complaints and resentment. She tripped and fell again, adding another bump on her eye.

“When I calmed down to study the Fa and do the exercises, I knew as a Dafa disciple, I need to discipline myself according to Dafa's principles. This includes when I have conflicts with other practitioners. Instead of looking externally and following my own notions, I need to look inward and improve myself. If I cannot elevate myself and remain trapped in these human notions, then I'm still an everyday person,” Ms. Mao said. As her xinxing improved, the bump on her eye disappeared.

Mr. Yu from Michigan talked about his experience when he participated in Dafa events in New York earlier this year. He joined other practitioners during the character formation on Governors Island. Because of his poor xinxing and the chronic knee joint pain that had bothered him for 10 years, doing the sitting meditation for 2 hours was very challenging. When the event was over, thousands of practitioners lined up, waiting to board the ferry. He feared that the parking garage might close before he arrived. Instead of waiting his turn, he went to the head of the line and boarded the ferry.

Although he saved an hour, he encountered a traffic jam, followed by his hotel reservation being canceled. After phoning other hotels for nearly 2 hours, he could only find a hotel several miles away, in a remote area. By the time he arrived it was already late at night. He said, “I could not sleep and I kept thinking about what went wrong. I realized that I had failed to follow any of the principles of Truthfulness-Compassion-Forbearance that day. I knew this was big problem and I had to work on it.”

The next morning, Mr. Yu was able to meditate for an entire hour, for the first time in the two years. “I felt so good! I'm so grateful because Master helped me to identify so many attachments that I had been ignoring,” he said.

“What I Enlightened to Regarding 'Consummation'”