(Minghui.org) Falun Gong, also known as Falun Dafa, is a meditation system based on the principles of Truthfulness-Compassion-Forbearance. Since the Chinese Communist Party (CCP) began to persecute it in July 1999, many Falun Gong practitioners have been detained and tortured in custody for refusing to renounce their faith.

This report focuses on Hunan Women’s Prison. Practitioners incarcerated here are usually kept in the Transformation Unit (later known as the High Security Division), where they are subject to intense physical and mental abuse as authorities try to force them to renounce their faith.

Division manager Huang was appointed in 2018 and was joined by political instructor He in the same year. Assistant manager Li Jun has been involved in the persecution of practitioners for at least 14 years.

Supervisors include Li, who joined in 2018; Tu Wenli, who has been involved in the persecution for 8 years; and Tang Ying, who has persecuted practitioners for 15 years. In addition to mistreating practitioners, she also extorted a large amount of money from inmates in exchange for parole or reduced prison terms. Even for legitimate term reductions, she often charged 30,000 to 40,000 yuan per person.

Officer Liu Qian has participated in the persecution for 14 years. She has developed a set of strategies aimed at forcing practitioners to give up their belief. She decides how to abuse practitioners and when to stop the torture. When practitioners seem unable to withstand it any further, Liu sometimes orders inmates to continue abusing practitioners until “the time is ripe,” meaning that she is certain that practitioners would give in at that point.

Liu has several criteria to measure if a practitioner has been completely “transformed:” a) taking medicine; b) killing; c) swearing at people; d) showing all kinds of dirty desires and cursing Falun Gong and its founder. To Liu, the louder one curses, the better the transformation has been achieved.

Another officer is Zhang Yuyu, who has a background in psychology and specializes in ideological education.

This division was divided into two sections in 2015.

This section stopped forced labor in 2015 to focus on brainwashing practitioners all day long. When practitioners refuse to yield, guards would torture them in a special place down the hall behind large furniture. Practitioners are beaten, forced to stand motionlessly for long periods of time, tied up, and deprived of sleep. Some were allowed to sleep for only two or three hours. The beds are wet wooden boards, and practitioners are denied clothing and access to a toilet. With no change of clothes, some practitioners’ lower bodies festered and developed ulcers. Nonetheless, the brainwashing continues and they are forced to watch defamatory videos in one room. 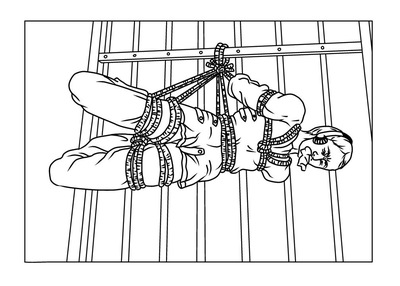 Falun Gong practitioners are tied up and hung up in prison.

Four or five inmates are assigned to mistreat each practitioner. They beat, hang up, and shock practitioners with electric batons. They also force practitioners to stand on portraits of the founder of Falun Gong. Some practitioners gave up their belief against their will.

Physical punishment is usually not allowed to last longer than two and half hours, but practitioners are excluded from the limit. Guards and inmates put practitioners in blind spots without surveillance cameras and sometimes force them to stand or squat in the bathroom motionlessly for the entire night.

The second section is in a remote area of the prison compound. It is humid and has no windows. In winter and spring, there is water on the floor; in summer, it is extremely hot.

It is separated into 9 cells, and practitioners are not allowed to interact with each other. Each practitioner is only given one cup of water per day, with nothing to clean with. Food is provided through a small opening in the door, and one has to eat, drink, urinate, and defecate all in the same place. The abuse is little known to the outside. After a few days, a practitioner confined there would look ragged and be in extremely poor condition.

Dozens of inmates were selected to abuse practitioners. One of the inmates, Zeng Xia, is a drug addict and beat practitioners when they called out, “Falun Dafa is good!” Guards often instructed her to beat practitioners, tie them up, or force-feed them. Although the prison policy did not permit drug addicts in the High Security Division, guards made an exception for her due to her cruelty.

Most practitioners have been wounded or even disabled by the physical abuse. Sometimes they are sent to a hospital for treatment. As soon as their condition improves a bit, however, they are taken back to prison for further abuse. As a result, some practitioners were driven insane, became disabled, or died.

One day in early 2009, several inmates carried a practitioner in a chair to the prison clinic. This practitioner was from the brainwashing center inside the High Security Division. A medical examination showed severe injuries to internal organs, major internal bleeding, and several broken ribs. The doctor also determined that the practitioner had died three hours earlier. “You know, this is already the 6th Falun Gong beaten to death here,” the doctor told an inmate.

Not long after that, an emergency vehicle came with several police officers. “They always do things like this,” murmured one inmate to another, “After someone dies, they just falsify a document claiming the resuscitation failed, and no one would be held responsible.”

In the freezing winter of early 2018, because one practitioner did not yield to the abuse, inmates removed all her clothes and forced her to stand motionlessly in the bathroom for over a week. They even opened the window to make it as cold as possible.

The prison routinely uses straitjackets as a way to torture practitioners. The more the victim struggles, the tighter it becomes. Practitioners would also be hung up while wearing a straitjacket. This often leads to difficulty breathing, muscle pain, and incontinence.

Ms. Cao Cuiyun, a practitioner in her 70s from Qidong County, was put in a straitjacket and hung up. After a short while, she lost control of urination and fainted.

Ms. Deng Yue’e from Huaihua City was once forced to wear a straitjacket and hung up for one night. She was then forced to squat without moving for over 10 hours. This led to bruises on her thighs, which stuck to her underwear. As she changed clothes, a large area of skin was pulled off from her thigh, which bled. Ms. Deng was tortured this way three times in one week.

When Ms. Deng protested the harm she suffered, guards forced her to hand copy the judicial interpretation by the Supreme Court and Supreme Procuratorate of Chinese Criminal Law’s Article 300 for over 20 days. This interpretation is often abused by officials to sentence practitioners. Ms. Deng had to hand copy the text 13 to 14 hours a day during the freezing winter, making her extremely fatigued. She nearly lost consciousness.

Ms. Qin Xiaolan from Changde and Ms. Yang Tianliu from Changsha were forced to stand under the scorching sun in the summer for a long time. After fainting and falling to the ground, they were rescued and then made to continue standing. Ms. Zhang Xinqi from Ningxiang was forced to stand 12 hours a day for 17 consecutive days. With no access to a toilet, she had urine and feces all over.

Ms. Yin Hong from Changde once murmured something to herself. Although it was not loud, one inmate pushed her down on the ground and stomped on her mouth hard, causing severe swelling.

Some felons abused practitioners at will to vent their frustration and anger. At all times, the prison is filled with yelling from guards and inmates mixed with the sound of practitioners being beaten and screaming.

“Two Sisters and a Husband Imprisoned for Practicing Falun Gong”