(Minghui.org) Falun Gong practitioners all over the world hold events every year to commemorate fellow practitioners who have died as a result of the persecution. This year is particularly significant, as 2019 marks 20 years of the Chinese Communist Party’s (CCP) persecution of Falun Gong. Practitioners from Israel participated in three major events in Tel Aviv.

Silent Protest in front of the Chinese Embassy

On Tuesday, July 16, dozens of practitioners dressed in white gathered in front of the Chinese embassy in Tel Aviv. They demonstrated the four standing exercises and the sitting meditation.

Practitioners hold a peaceful rally in front of the Chinese embassy in Tel Aviv on July 16, 2019.

Drivers passing by stopped to read the signs and watch the exercises. Some of them asked questions. 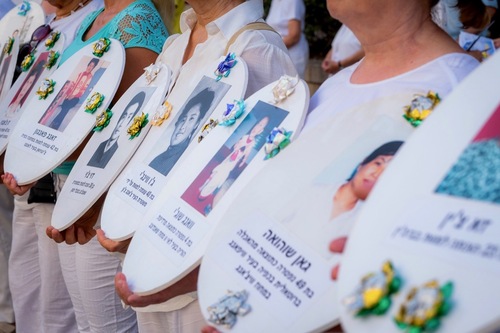 Practitioners in front of the Chinese embassy in Tel Aviv

One passerby, an engineer and physics teacher, said that he learned about the practice and the persecution of Falun Gong from former Knesset Member Bezalel Smotrich. He expressed his disgust with communism and its crimes, and after a few minutes he joined the group of practitioners for the sitting meditation.

About 50 practitioners from all across Israel participated in the event.

On Saturday morning, July 20, dozens of practitioners showed up on Neve Sha’anan Street in Tel Aviv, next to the old central bus station, an area teeming with people on Saturday mornings. These streets serve as a weekly gathering spot for hundreds of foreign Chinese workers, who stop by to buy fresh groceries and meet with fellow Chinese. They can usually be seen standing in groups, their baskets full of groceries, chatting and laughing.

At 7:00 a.m. even before the grocery shops opened, the Chinese workers were surprised to see banners hanging on every tree and pole in the area – posters about the persecution, photocopied Chinese articles about Falun Gong, and photos of large-scale group exercise practice in cities around the world. 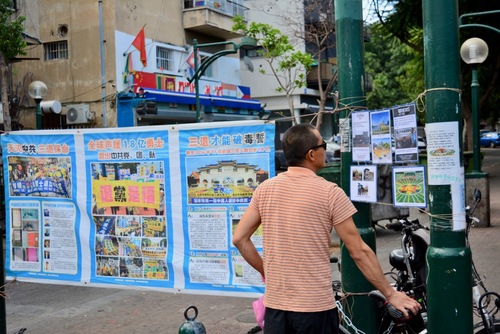 Chinese foreign workers in Tel Aviv were amazed to see banners with information about the persecution of Falun Gong in China.

A wide-screen TV showed videos in Chinese about Falun Gong being practiced around the world. The videos fascinated many Chinese workers who stood and watched from beginning to end.

Several Chinese gathered around a narrator who read passages in Chinese about Falun Gong and the persecution. The Chinese workers took pictures of the group doing the exercises. 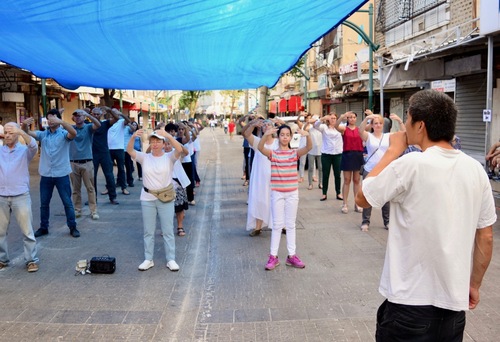 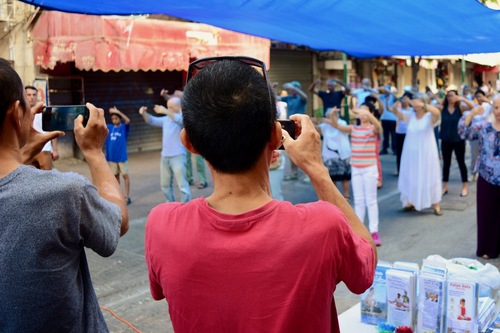 Candlelight Vigil in Front of the Tel Aviv Cinematheque

At around 7:00 p.m., dozens of Falun Gong practitioners gathered outside the Tel Aviv Cinematheque movie theatre. They set up a stage with a large banner reading “20 Years of Courage.”

At the foot of the stage, ten practitioners sat in meditation, each holding a candle and a photo of a victim of the persecution, with a short description of his or her story. 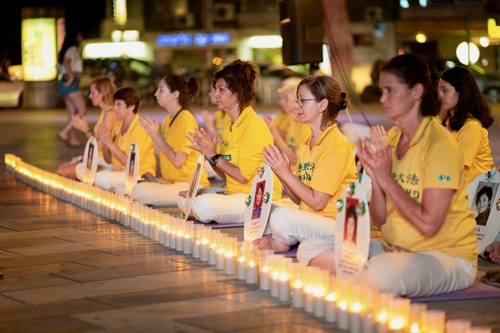 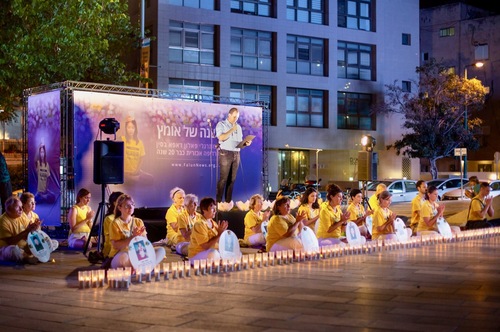 As night fell, the lit candles could be seen from afar, creating a feeling of tranquility. Some distance from the square was a table where people could sign a petition calling for the prosecution of Jiang Zemin, head of the CCP in 1999 and the initiator of the persecution.

Two hosts on stage invited the spectators to learn about the crimes against humanity “that few have been talking about and that have been going on for 20 years.” “We are here,” they said, “calling for an end to the brutal persecution of millions of innocent people, who decided to hold on to their belief in Truthfulness-Compassion-Forbearance. ...in a gradual and lengthy process of false propaganda and defamation of Falun Gong, and with the aim of damaging its popularity, a campaign to eradicate it was launched by the communist regime in China. On July 20 1999, the former Communist Party chairman, Jiang Zemin, gave orders to 'Ruin them financially and destroy them physically.'

“Isn’t it hard to believe that such a thing can happen today?” asked the host. “For us Israelis who live in a free world, it is really unimaginable. And yet, to understand how such things can occur in China, you need to know the true nature of the Chinese Communist Party.”

The rally continued as the stories of four Chinese Falun Gong practitioners persecuted in China were read. They were presented as a miniature play with several narrators representing a different character in each story.

The audience was fascinated. A number of people signed the petition calling for an end to the persecution. 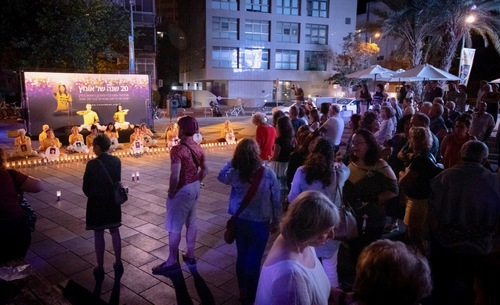 The crowd at the rally outside Tel Aviv Cinematheque, July 20, 2019

The host went on to say, “Every year on July 20, there are rallies all over the world that tell about the hideous crimes [perpetrated against Falun Gong] and about Falun Gong practitioners who are withstanding unimaginable cruelty, and of our hope that all this evil will perish. This year, we mark 20 years of the persecution of Falun Gong in China, and we hope it will also be the last year of pain and suffering inflicted upon millions of people. We invite you to attend the rally and light a candle to commemorate the victims who died in the persecution. You can also sign the petition to condemn the persecution. But most importantly – whoever hears this today – please tell those you know and help us to raise awareness about what is happening in China today. Together we can stop the persecution!” 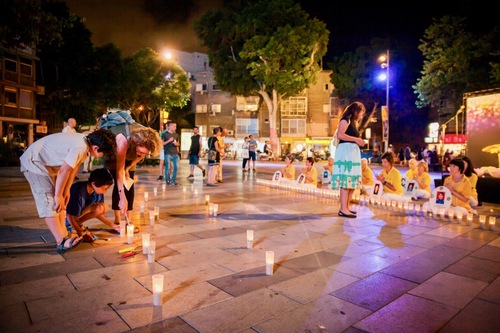 Passersby light candles in memory of the victims in China

At the same time, the film Letter from Masanjia was screened at the Cinematheque. The movie theater was completely packed and some sat on the stairs not wanting to miss the movie. 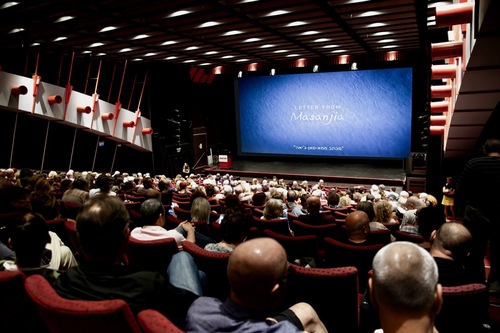 The movie theater was packed when Letter from Masanjia was screened at the Tel Aviv Cinematheque on July 20.

At the end of the movie, there was silence in the theater. At the Q&A session, there were questions about the film, the photography and the animation, and the persecution. Afterward, the audience spilled out into the plaza in front of the cinema and faced the stage, the candles, and the stories. Some people shed a tear and some lit a candle. Some shared their impressions:

“It was a powerful experience.”

“It was excellent. I'd heard about this before but didn’t know how it all unfolded, so it was very interesting and sad to watch.”

“It was worth watching, fascinating.”

“It is important that people know about the violations, the torture, the lack of freedom, and the horrors that were inflicted upon this group of innocent people. I would like to share this information and raise more awareness,” said Ms. Glory Zhukovicki.

Journalist Gad Lior wrote the day after the event: “Although I was supposed to attend another event, I decided in light of the important topic to come especially from Jerusalem to Tel Aviv, and I did not regret it for a moment. This is one of the most powerful and touching films I have seen in recent years, and I’ve already recommended it to friends. I also saw the quiet rally outside. It was very moving.”