New Journal of Zurich: Falun Gong Practitioners in China Are Persecuted for Their Belief

(Minghui.org) The New Journal of Zurich (Neue Zürcher Zeitung, NZZ), one of Switzerland's major newspapers, published an article about Falun Gong on July 22, 2019, the 20th anniversary of the beginning of the persecution of the practice in China. The article was titled “The Suffering of Falun Gong Practitioners in China.” It described the experience of a Hong Kong practitioner over the past 20 years. 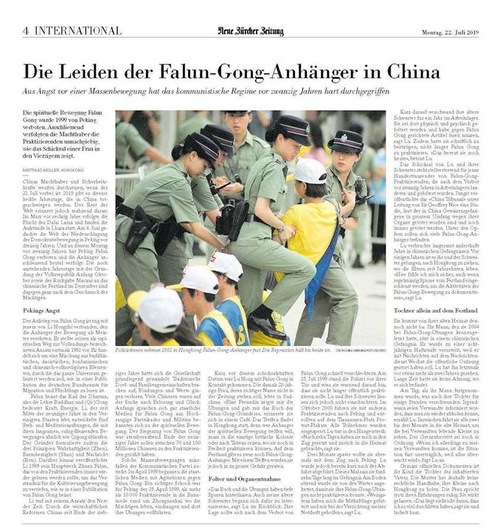 Founded in 1780, New Journal of Zurich is a Swiss German language daily newspaper. According to its website, it has 257,000 readers for its print and digital editions. The paper is known for its objectivity and detailed reports on international issues.

The article began: “The spiritual movement of Falun Gong was banned in 1999 by Beijing. The authorities have persecuted the practitioners of this cultivation practice relentlessly, as evidenced by the persecution of a woman in her 40s.”

According to the article, Falun Gong was introduced to the public in May 1992. Its adherents are instructed to do five gentle exercises and to follow the principles of Truthfulness-Compassion-Forbearance. By reading Zhuan Falun, the main teachings, published in 1995, practitioners can improve their understanding of the Falun Gong principles.

Because it promoted traditional values and open-mindedness, Falun Gong was very popular. Especially after the implementation of the economic reforms in the late 1970s, there were radical changes in China, and many traditional family values were lost. Many people in their search for a spiritual path and happiness, found Falun Gong.

Even the Chinese news media praised Falun Gong at first. It was practiced by high ranking officials in the Chinese Communist Party (CCP) and the military. About 70 to 100 million people were estimated to be practicing Falun Gong by the late 1990s.

The CCP could not tolerate any idea not beholden to its dictates. Thus, it began to denigrate the practice through the government-owned media in April 1999. This led to the peaceful appeal for the right to practice Falun Gong on April 25, 1999, when about 10,000 practitioners gathered at the government office of appeals in Beijing.

Ms. Lu Hong, 22 at the time, heard about Falun Gong from a friend several days before that. Ms. Lu learned the exercises and began to read books written by the founder of Falun Gong. She changed for the better, which prompted her sister to learn about the practice.

The suppression that started in July 1999 was a big turning point. The police visited her at home on July 25, 1999, warning her to stop doing the exercises in public. Determined not to give up their faith, Lu and her sister went to Beijing in October 2000 and unfurled a Falun Gong banner on Tiananmen Square. After they and other practitioners were detained, Ms. Lu went on a hunger strike to protest the persecution. She was taken back to her hometown 10 days later.

Three months passed and Ms. Lu decided to go to Beijing again to appeal for the right to practice Falun Gong. Shortly after she got on the train, she was arrested and detained for 15 days. She was chained to the floor to prevent her from doing the exercises. Luckily, other detainees gave her food and helped her when she needed to use the toilet.

Ms. Lu was also detained in prison for 18 months. Several years ago, she and her sister went to Hong Kong to live with their parents. Although the CCP spies also collect information about Falun Gong practitioners in Hong Kong, at least it is safer than being in the mainland.

According to the New Journal of Zurich article, what Ms. Lu and her sister experienced is nothing when compared to the persecution that Falun Gong practitioners in China have suffered during the past 20 years.

An independent people’s tribunal, led by Sir Geoffrey Nice, concluded earlier this year that Falun Gong practitioners and other prisoners of conscience have been murdered in China for their organs. This outrage is still taking place.

The impact of the suppression has not been limited to Ms. Lu herself; her family and relatives have also suffered. She met her husband in 2004. Also a practitioner, he was later sentenced to eight years in prison for spreading information about Falun Gong through WeChat, a popular social media in China. He is currently in a Chinese prison. The last time Ms. Lu saw him was over two years ago and for a long time, she did not know his whereabouts.

The day her husband was arrested, her daughter disappeared for a few hours. The family was later notified by officials to pick the girl up. With her father imprisoned, the girl was not permitted to leave China. Ms. Lu had no choice but to ask a relative to look after her.

Ms. Lu now visits her daughter once every two or three months. Her relatives are nervous about her visits due to police surveillance, but Ms. Lu is able to remain calm. “Maybe that's because I've suffered so much,” she said smiling briefly.