Australia, Norway and Germany: Rallies and Candlelight Vigils Mark the 20th Anniversary of Protesting the Persecution

Falun Gong is a peaceful mind-body cultivation practice based on the principles of Truthfulness-Compassion-Forbearance. The CCP, directed by former leader Jiang Zemin, launched the brutal persecution of Falun Gong practitioners on July 20, 1999.

The Minghui website has confirmed the deaths of more than 4,000 Falun Gong practitioners due to the persecution over the past 20 years. However, the actual number of deaths is suspected to be much higher, but due to the CCP's information blockade, it is difficult to get news out of China. Many more practitioners have been imprisoned and tortured for their faith. Independent investigations have gathered concrete evidence that the CCP is harvesting organs from detained practitioners, who are killed on demand to supply the organ transplant industry.

Following are reports from recent rallies and candlelight vigils in Australia, Norway and Germany.

Falun Gong practitioners held a march, rally and a candlelight vigil in downtown Melbourne on July 20, 2019. The rally was held in front of the State Library of Victoria at noon, immediately after the march. Several community leaders and elected officials participated in the rally and called for an end to the persecution in China. 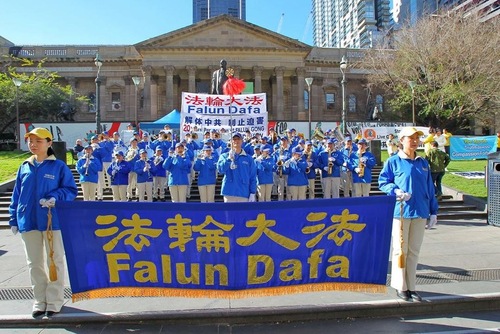 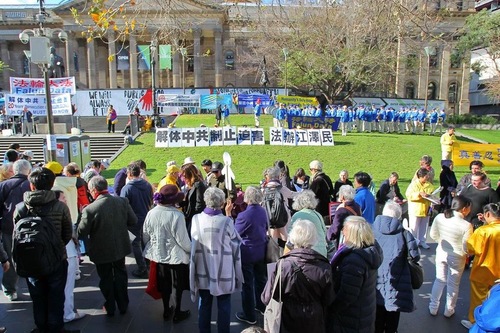 Falun Gong practitioners hold a rally in front of the State Library of Victoria on July 20, 2019. 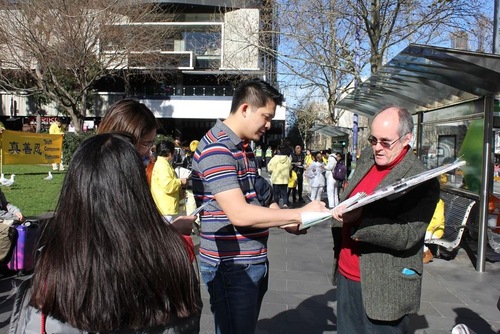 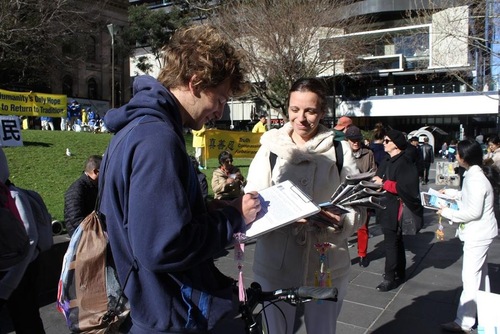 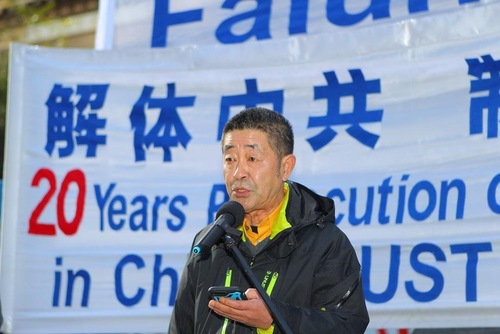 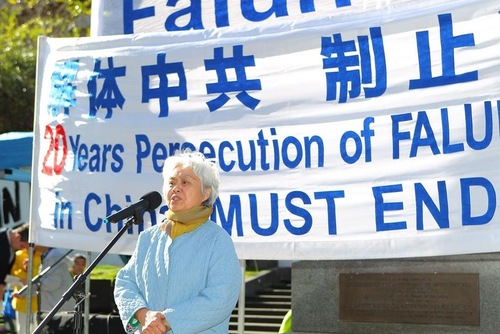 Qi Jiaxuan, Australian Chinese writer and vice president of the Independent Chinese Pen Association, admires Falun Gong practitioners for spreading the practice across the world while facing the CCP’s persecution. 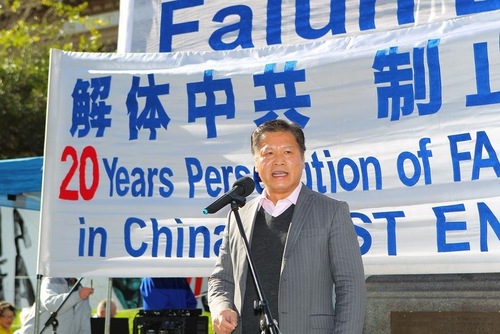 Yuan Jie, editor-in-chief of the Tiananmen Times in Melbourne, says that Falun Gong practitioners who strive for freedom of belief benefit everyone. 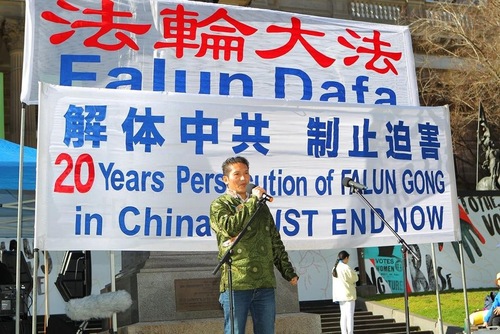 Tenzin Khangsar, chair of the Tibetan Community of Victoria, says that eventually the CCP will disintegrate and justice will prevail. 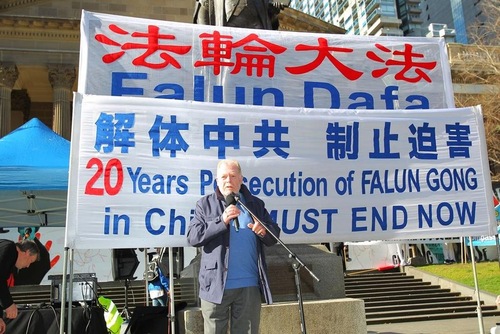 Andrew Bush, senior member of the Australian Liberal Party and vice chairman of Better Hearing Australia, said that according to investigations conducted by independent organizations since 2006, the number of people killed through the Chinese regime's live organ harvesting is at least four times that of the population of Tasmania, Australia.

“Think about it: the number of people killed is four times that of Tasmania! How terrible this is! This is the crime that is happening,” he said.

He said that 6 million Jews were killed in the Holocaust during the World War II. “We vowed that we would never allow such a thing to happen again. However, 20 years ago, in China, this happened again. And it continues to this day,” he said.

“Facing evil, if good people do nothing, it is to promote evil,” Mr. Bush said. “Every Australian should stand up and help to stop this evil crime.” 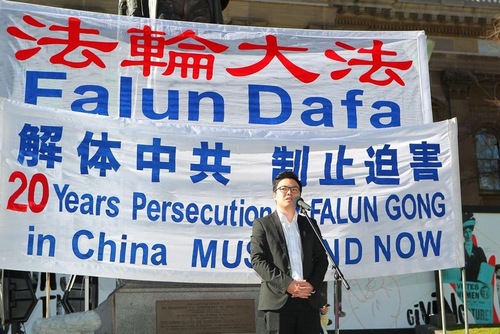 Zion Lo of Australia-Hong Kong Link calls on all people to stand together to protest the CCP’s persecution. 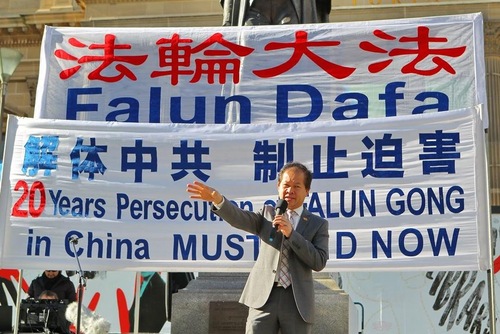 Bon Nguyen, Chair of the Australian Vietnamese Association, condemns the persecution and calls on the Australian government and the people to help stop it. 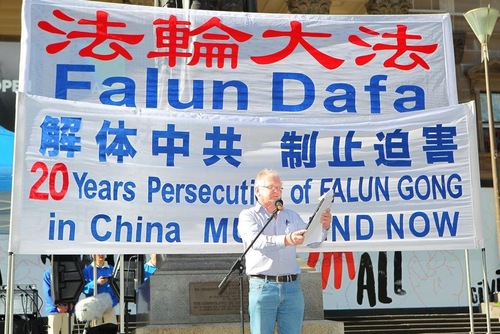 Gerard Flood, former vice chair of the Democratic Labor Party, urges the Australian Federal Government and Parliament to pass The International Human Rights and Corruption (Magnitsky Act) Bill 2018. He called for sanctions against the CCP officials involved in the persecution. 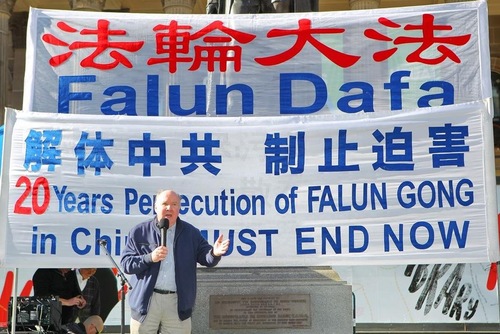 Peter Westmore, former president of the National Civic Council of Australia, condemns the CCP’s live organ harvesting and calls on the Australian people to stand up against the crime. 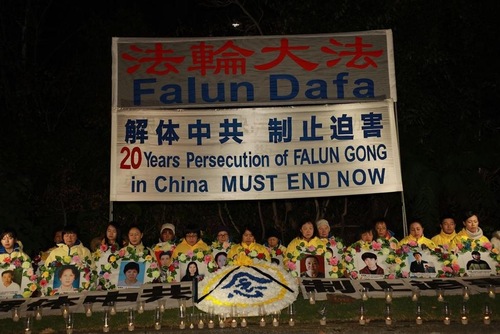 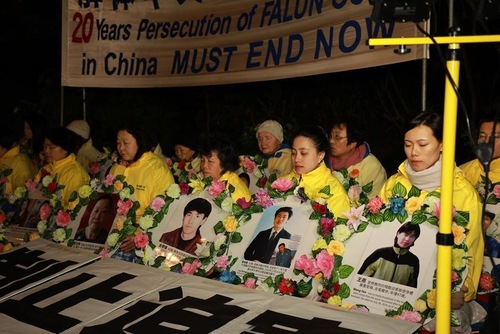 Candlelight vigil in front of the Chinese Consulate in Melbourne on July 20, 2019.

Falun Gong practitioners in Norway held a series of events in front of the Chinese Embassy in Oslo, in Palace Park and in front of Parliament to protest the CCP’s persecution and call for its end. 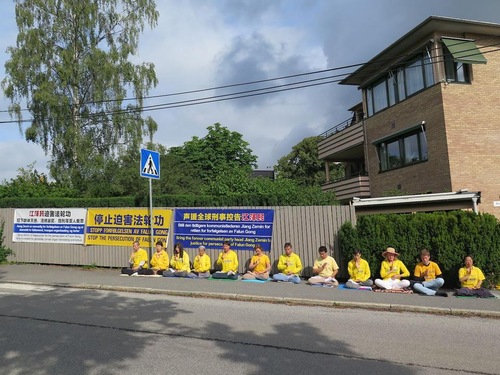 Falun Gong practitioners protest the persecution in front of the Chinese Embassy in Oslo, Norway, on July 20, 2019. 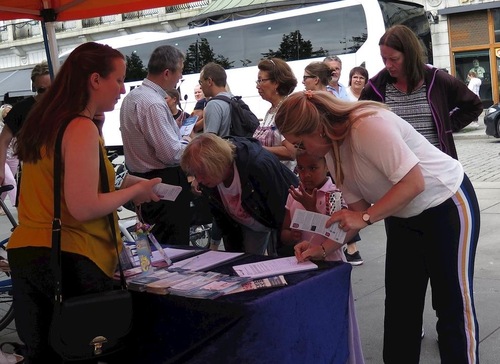 People sign a petition calling on Parliament to help stop the persecution in China. 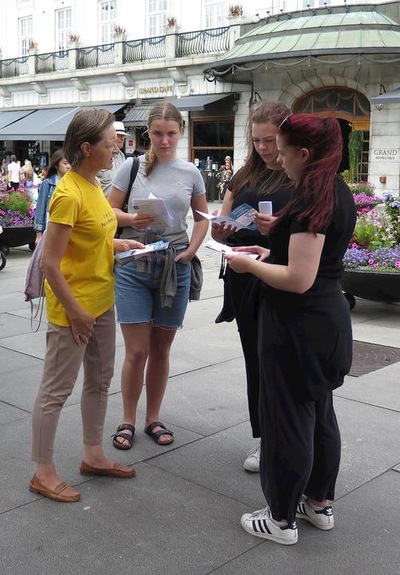 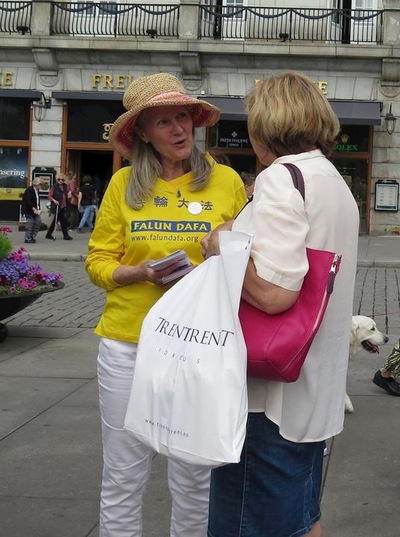 Two Belgian youth, Mary and Raphil, who were traveling in Norway, paused at the Falun Gong stand in front of Parliament and signed the petition to protest the persecution.

Raphil said, “We can't watch this without doing anything!”

Mary added, “We have to stop this very quickly!” 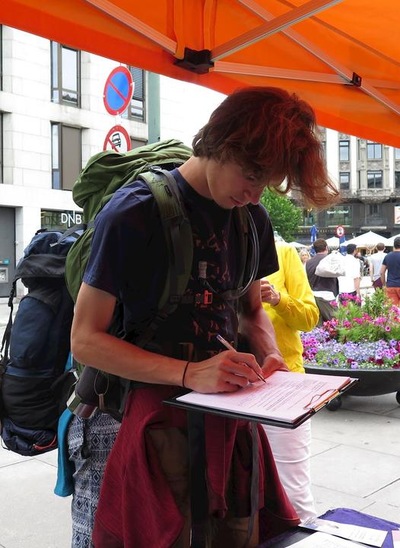 Raphil, a tourist from Belgium, signs a petition protesting the persecution.

Falun Gong practitioners in Berlin raised awareness of the persecution in China on July 27, 2019. Crowds of people participated in a parade on Unter den Linden in Berlin. Many of them were drawn to the Falun Gong exercise demonstration as they passed by the practitioners' stand. 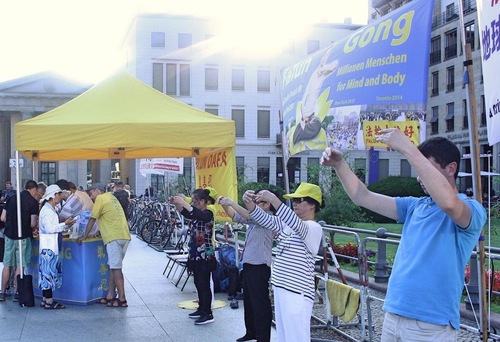 Falun Gong practitioners in Berlin hold activities to introduce the practice and raise awareness about the persecution on July 27, 2019. 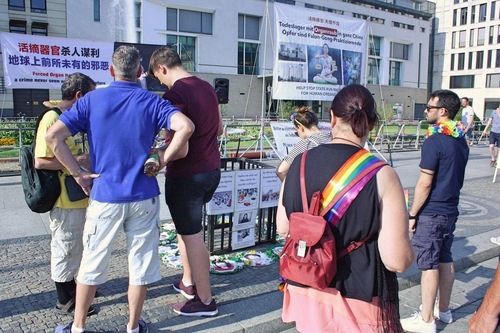 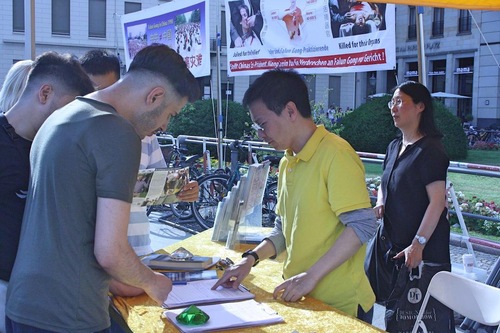 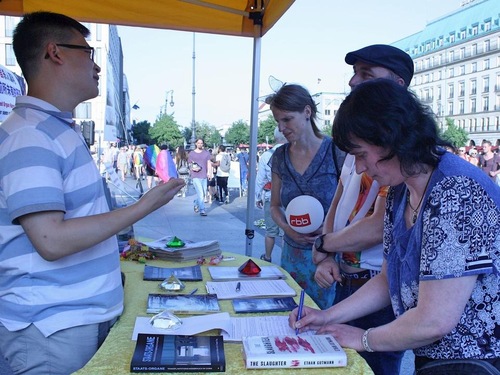 Christina signs a petition and says she felt sorrow for practitioners who are being persecuted.

“Facing My Fear and Notions and Taking Responsibility for My Cultivation”