Korea: Over 1,000 Gather for Events Marking 20 Years of Countering the Persecution of Falun Gong in China

(Minghui.org) More than 1,000 Falun Gong practitioners in Korea gathered at Seoul Plaza in front of the city hall to hold a rally and parade on July 20, 2019. 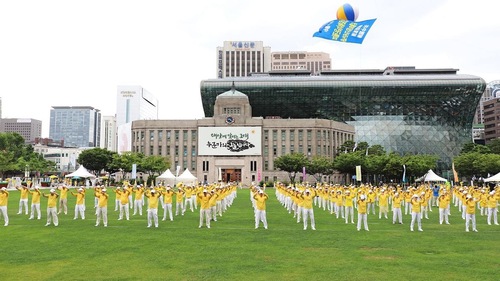 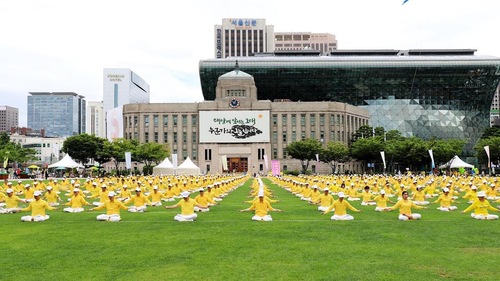 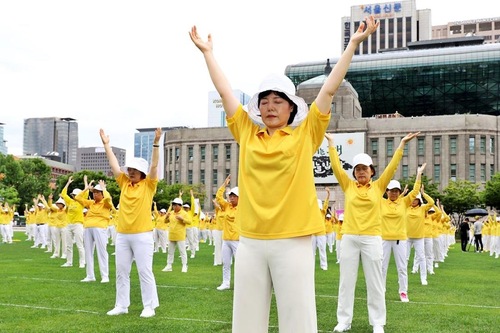 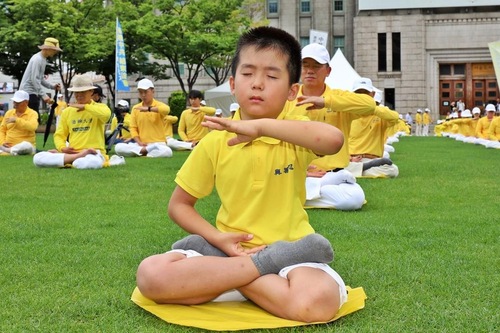 Despite a typhoon bringing stormy weather forecasts, practitioners went ahead with their activities as scheduled and the rain stopped when their activities started. Practitioners came from around Seoul and from other Korean cities to do the exercises together in a large group, which created a beautiful scene. Passersby stopped and took pictures. 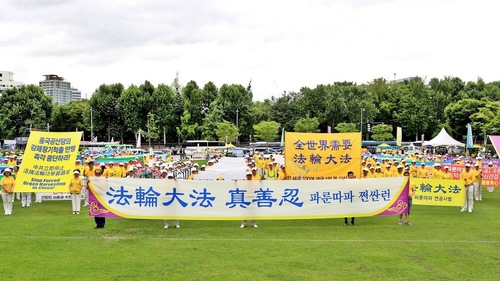 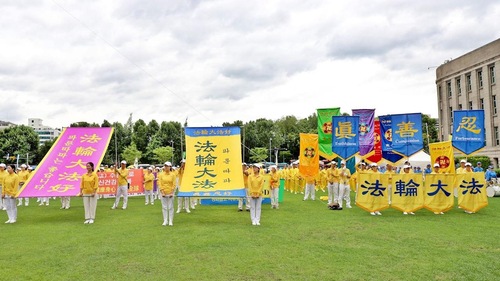 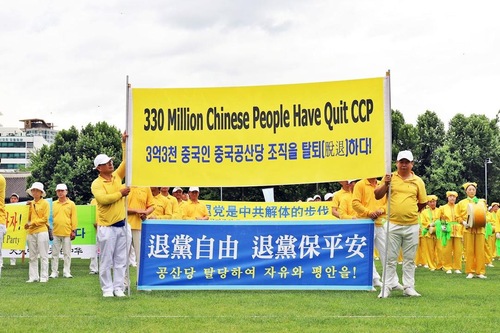 Korean Falun Gong practitioners call for an end to the CCP's persecution on its 20th anniversary.

As the rally started, the Tian Guo Marching Band played solemn music. More than 20 practitioners in dressed in white slowly walked onto the stage holding pictures of persecution victims. A speech was given in memorial of all the Falun Gong practitioners who had died from the CCP's persecution. 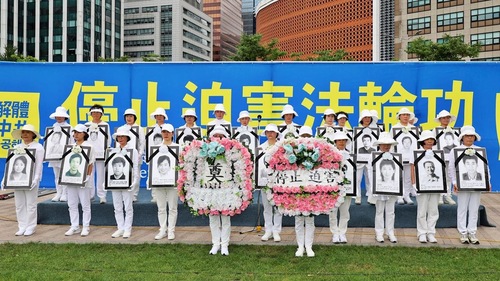 Commemorating Falun Gong practitioners who lost their live in the CCP's persecution in China. 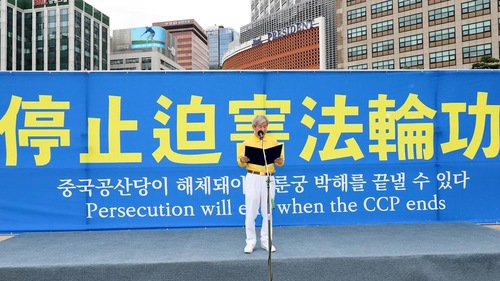 Mr. Kwon Hong-Dae, chairman of the Falun Dafa Association of South Korea, said during his speech that the CCP has utilized the state propaganda apparatus to slander Falun Gong and create an environment to harvest organs from living Falun Gong practitioners. The only way to end the persecution was to disintegrate the CCP. He strongly believes the CCP's days are numbered.

Dr. Wu Shilie, a spokesman for the South Korean Falun Dafa Association, made a special announcement at the rally: According to a Minghui Notice, the U.S. government was imposing stricter visa vetting and might deny visas to human rights violators and perpetrators of religious persecution. The South Korean Falun Dafa Association has submitted names of CCP officials who had sabotaged Falun Gong activities and Shen Yun performances in Korea to the U.S. Government, and the list of names included the Chinese Ambassador Qiu Guohong, the charge d'affaires of the Chinese Embassy Jin Yanguang, Consul General Wang Donghua and Secretary Wen Long 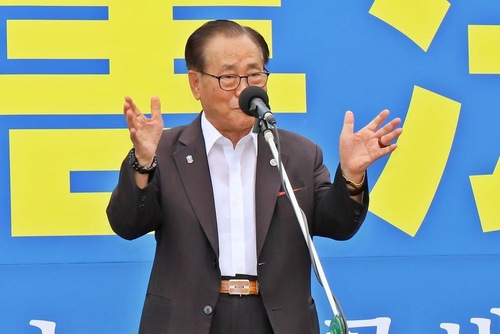 “I'm certain that peace, happiness and freedom won't be guaranteed until the day the Communist Party disappears from the Earth,” he said. “We must condemn the common enemy of mankind and the evil political system – communism and the communist party... Falun Gong practitioners have endured 20 years of persecution but stayed firm in their ideals of Truthfulness-Compassion-Forbearance. I sincerely thank you and support you for your tireless work for the health and happiness of all people.” 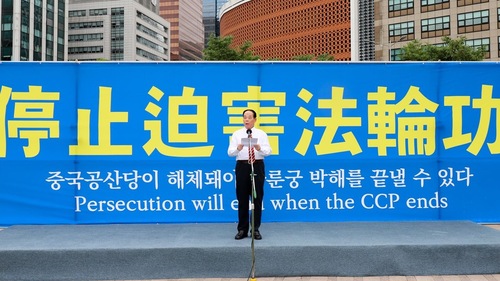 Mr. Wu Zhenrong, a representative of the Overseas Chinese Democracy Coalition in Korea, gives a speech.

Mr. Wu Zhenrong, a representative of Overseas Chinese Democracy Coalition, praised Falun Gong practitioners' persistent exposure of the CCP's crimes over the past 20 years. He stressed that the violent CCP regime will definitely collapse and justice will win eventually, despite the difficult journey. 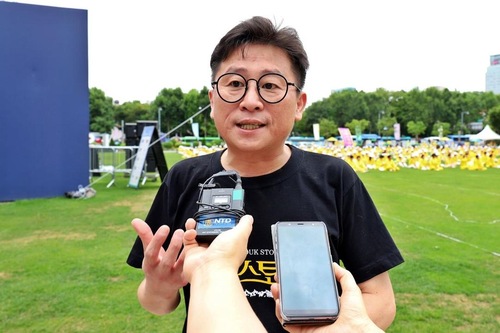 Mr. Jung Sung-San made an influential documentary about the people locked up in North Korea's concentration camps. He said that the CCP's forced organ harvesting was a crime against humanity and evidence of the party's doom.

“You are guardians of freedom. Falun Gong will be eternal!” he told the Falun Gong practitioners at the event. He called out in Chinese, “Falun Dafa is great!” 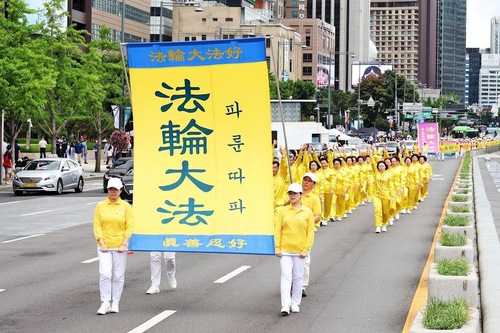 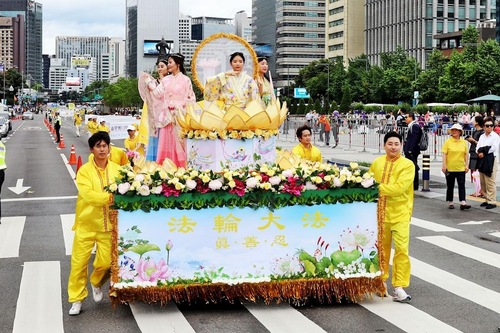 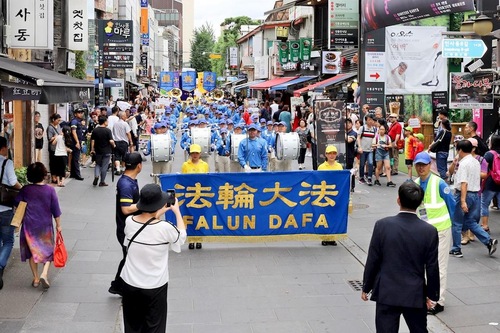 A large 2.5 mile (4 km) parade started from Seoul Plaza at noon, passing famous tourist attractions and through the business district. The parade procession was composed of several themes, including the Benefits of Falun Dafa, Resistance to the Persecution, and Supporting Withdrawals from the Communist Organizations.

Mr. Jin, a Chinese tourist, said he was struck by the Falun Gong parade. “In China, the government has demonized Falun Gong, but today, I see very peaceful and kind Falun Gong practitioners marching openly on the busiest streets in Korea. The police headed their procession. It must be a good practice,” he said.

Mr. Jin was eager to break through China's Internet censorship when he returns home, so he can find more information. He also decided to quit the Communist organizations he had joined as a child.

“Many of my friends have said, 'Who believes in the Communist Party?' The reason people joined the party was to get promotions. If it weren't for the system, who would join the party?” he said.

Many Koreans also expressed their support for Falun Gong. Mr. Kim, a local resident, said, “The persecution is ridiculous to people in democratic countries. What's wrong with self-cultivation? Your activities are meaningful. Keep up the good work! Let the world become a place where everyone is considerate of others.”

Mr. Lee, a school teacher, said, “All citizens have their rights. The Chinese Communist Party has persecuted Falun Gong for the sake of its own power. Communist regimes should be disintegrated, including North Korea's. I appreciate what you do. Don't give up! Good luck to you!”

“Poland: Introducing Falun Gong at a Multicultural Festival in Warsaw”

“Hunan Woman Imprisoned for Refusing to Renounce Her Faith”