(Minghui.org) On the 20th anniversary of the persecution of Falun Gong in China, United States Senators and House Representatives sent letters to commend practitioners’ peaceful and uncompromising courage in the face of the communist regime's brutality.

Minghui.org has confirmed the deaths of thousands of Falun Gong practitioners as a direct result of the persecution over the past 20 years; the actual number is suspected to be much higher. More have been imprisoned and tortured for their faith. There is concrete evidence that the CCP sanctions the harvesting of organs from detained practitioners, who are murdered to supply China's state-run organ transplant industry.

Falun Gong (also known as Falun Dafa) was introduced to the public in 1992. Nearly 100 million people across China soon began practicing and experienced improvements in their health and character. Former head of the Chinese Communist Party (CCP) Jiang Zemin, interpreted the spiritual discipline's growing popularity as a threat to the CCP's atheistic ideology and on July 20, 1999, issued an order to ban the practice.

Senator John Cornyn of Texas: “Your Dedication and Perseverance Continues to Serve as a Positive Example for the World” 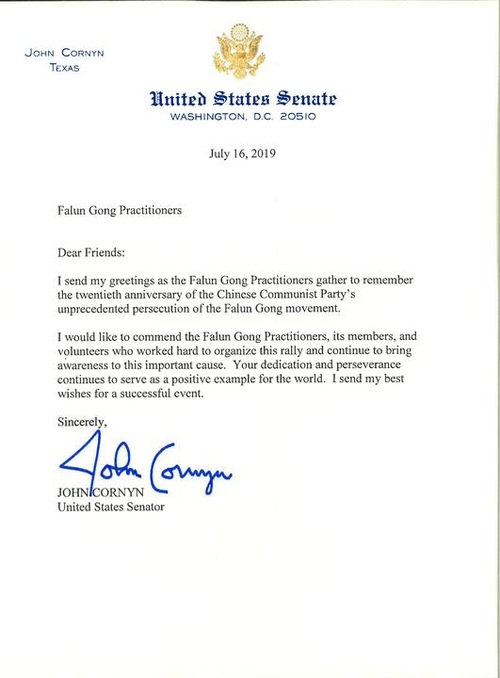 In his letter Senator Cornyn stated, “I would like to commend the Falun Gong practitioners, its members, and volunteers who worked hard to organize this rally and continue to bring awareness to this important cause.”

Senator Ron Jonson of Wisconsin: “I Join You in Calling for an End to the Persecution of Falun Gong in China” 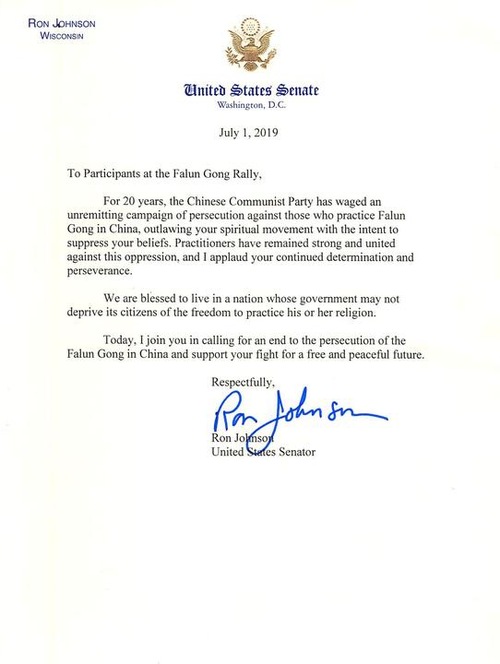 Senator Ron Jonson stated in his letter, “For 20 years, the Chinese Communist Party has waged an unremitting campaign of persecution against those who practice Falun Gong in China, outlawing your spiritual movement with the intent to suppress your beliefs. Practitioners have remained strong and united against this oppression, and I applaud your continued determination and perseverance.”

Senator Patrick J. Toomey of Pennsylvania: “I Commend Your Efforts to Bring Awareness and Understanding to This Issue” 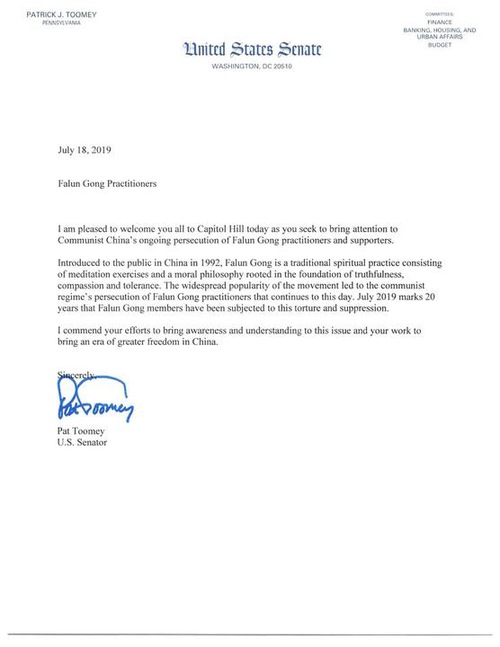 In the letter, Senator Patrick J. Toomey stated, “I am pleased to welcome you all to Capitol Hill today as you seek to bring attention to Communist China’s ongoing persecution of Falun Gong practitioners and supporters.”

Senator Mike Braun of Indiana: “I Give My Full Support to the Falun Gong Community” 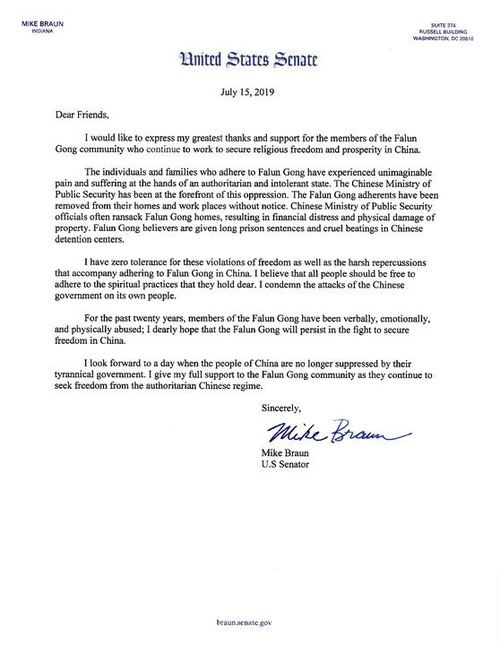 In the letter, Senator Mike Braun stated, “The individuals and families who adhere to Falun Gong have experienced unimaginable pain and suffering at the hands of an authoritarian and intolerant state. The Chinese Ministry of Public Security has been at the forefront of this oppression. The Falun Gong adherents have been removed from their homes and work places without notice. Chinese Ministry of Public Security officials often ransack Falun Gong homes, resulting in financial distress and physical damage of property. Falun Gong believers are given long prison sentences and cruel beatings in Chinese detention centers.”

House Representative Jim Sensenbrenner of Wisconsin: “I Am Proud to Stand with Falun Gong Practitioners” 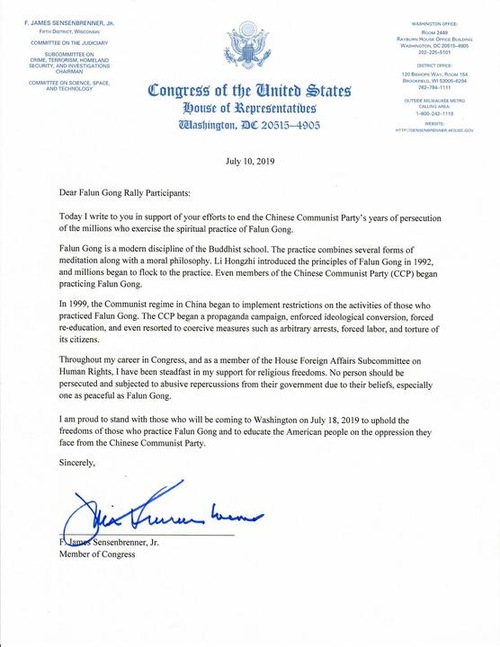 Representative Jim Sensenbrenner stated in his letter, “Throughout my career in Congress, and as a member of the House Foreign Affairs Subcommittee on Human Rights, I have been steadfast in my support for religious freedoms. No person should be persecuted and subjected to abusive repercussions from their government due to their beliefs, especially one as peaceful as Falun Gong.” 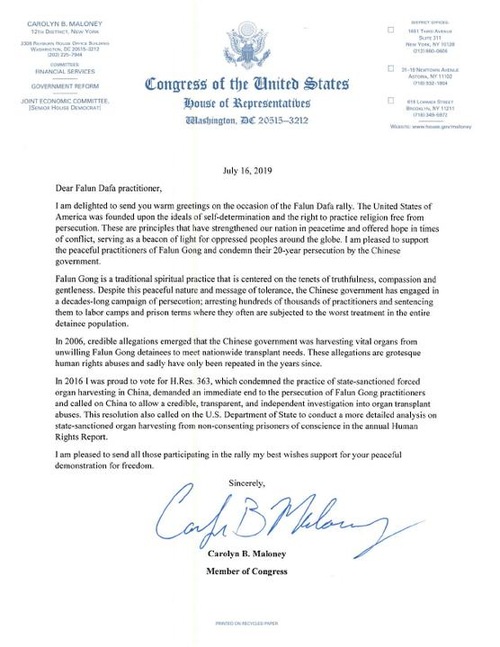 Representative Carolyn Maloney stated in her letter, “In 2006, credible allegations emerged that the Chinese government was harvesting vital organs from unwilling Falun Gong detainees to meet nationwide transplant needs. These allegations are grotesque human rights abuses and sadly have only been repeated in the years since.” 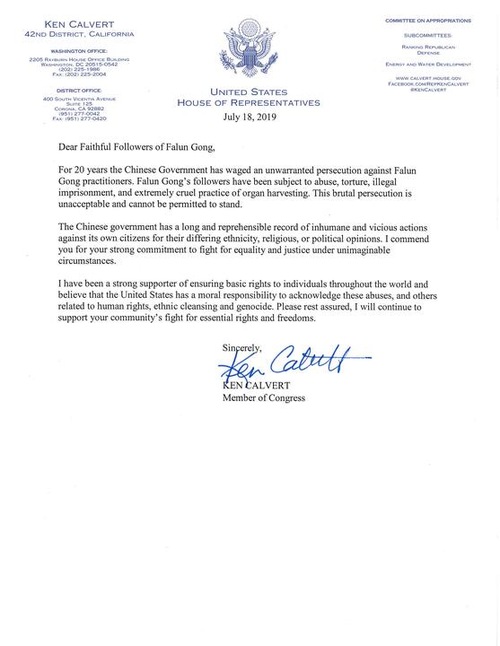 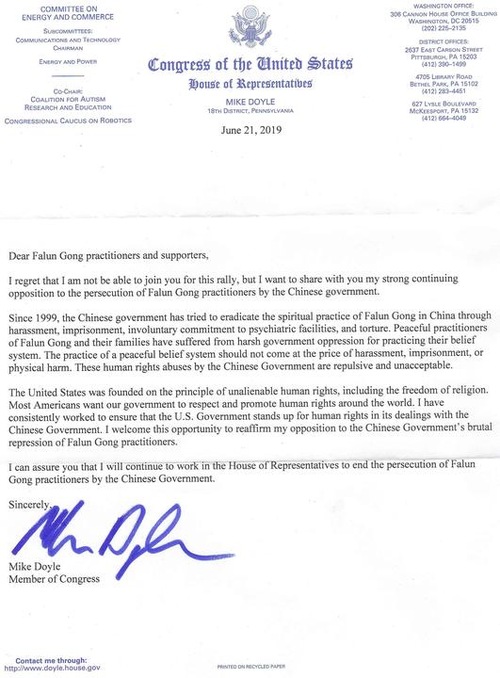 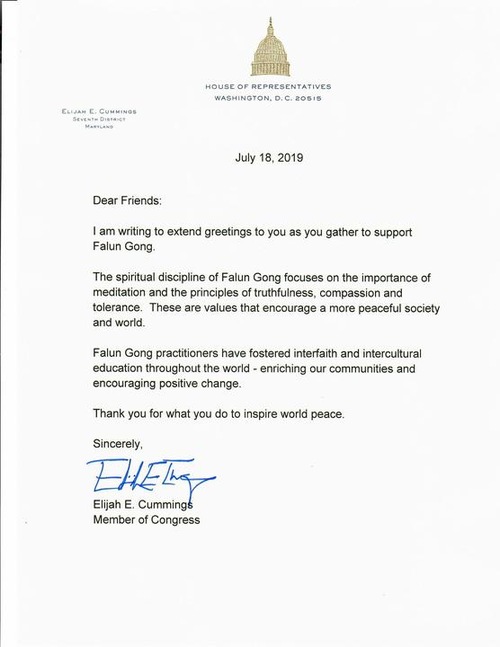 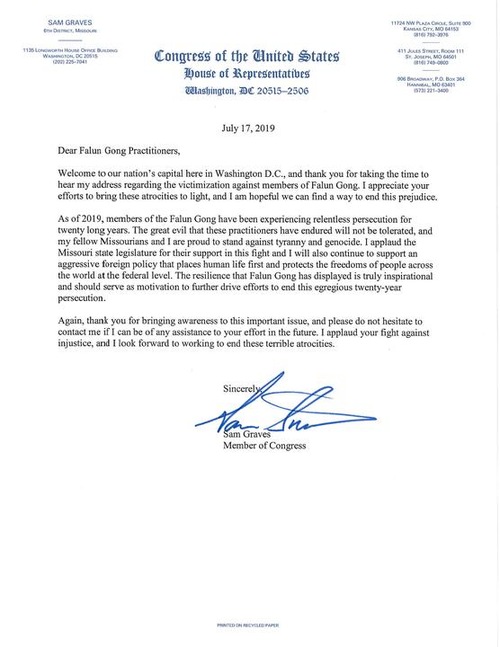 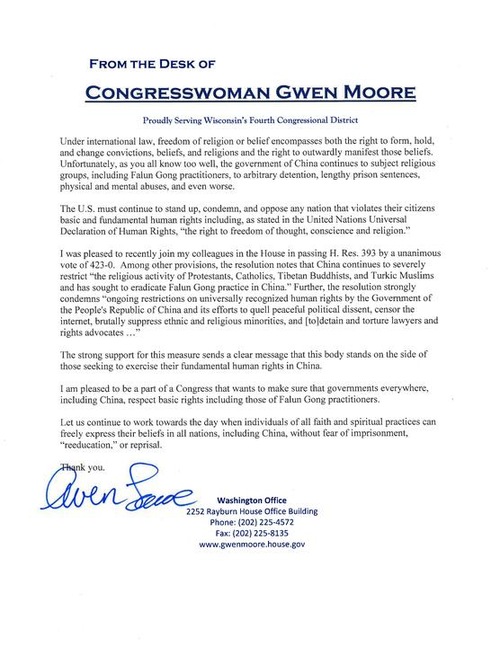 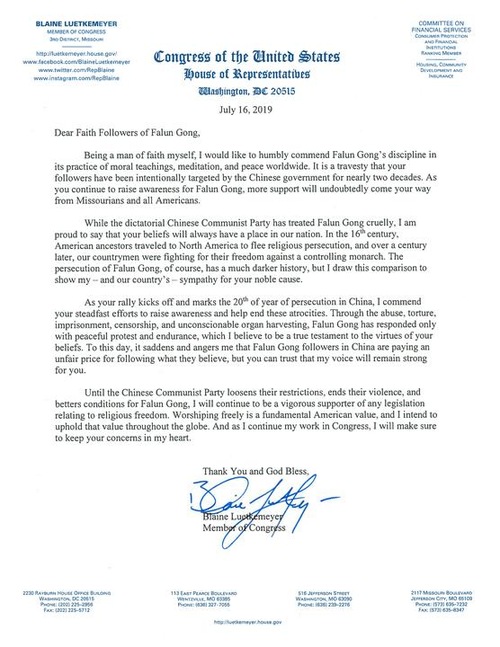 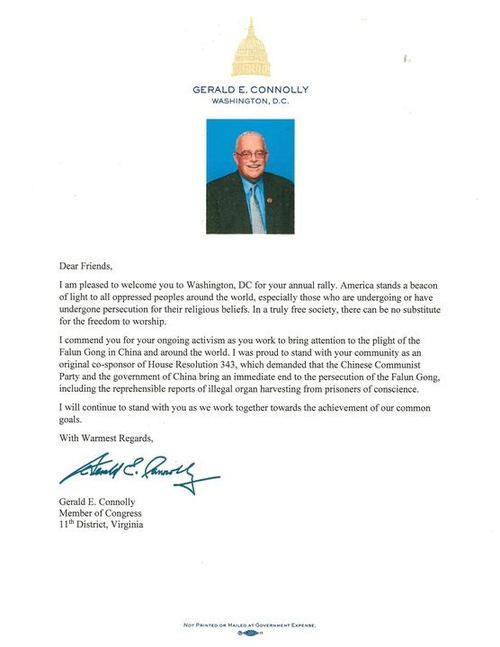 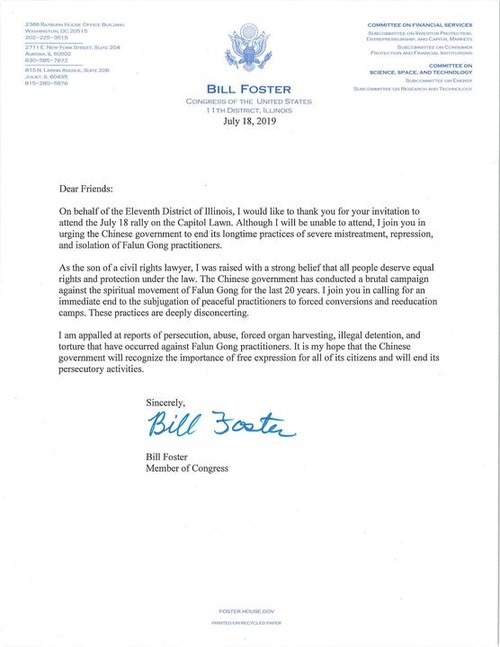 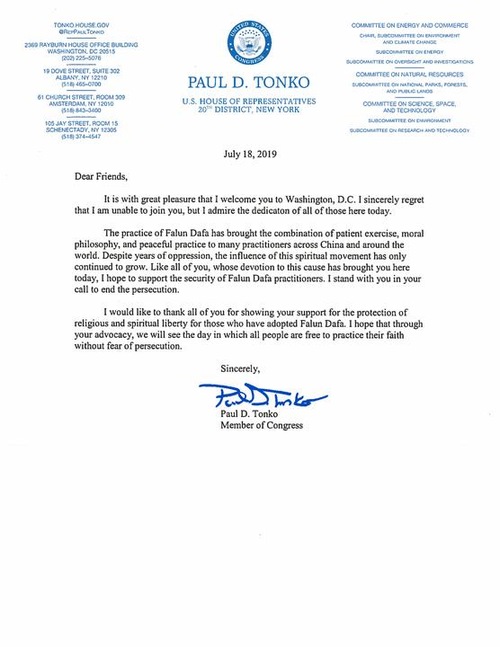 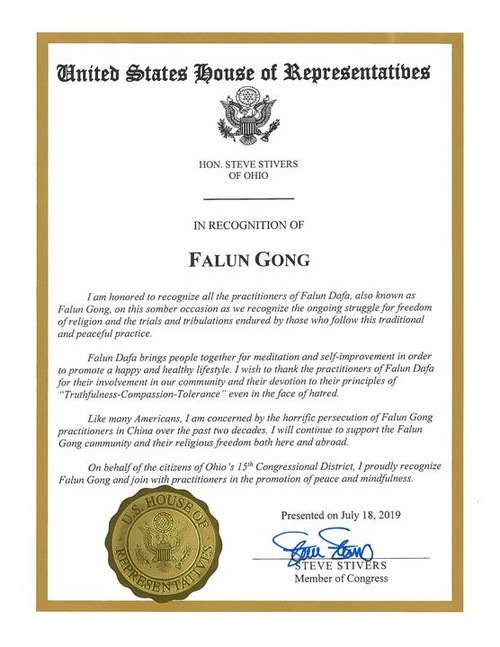 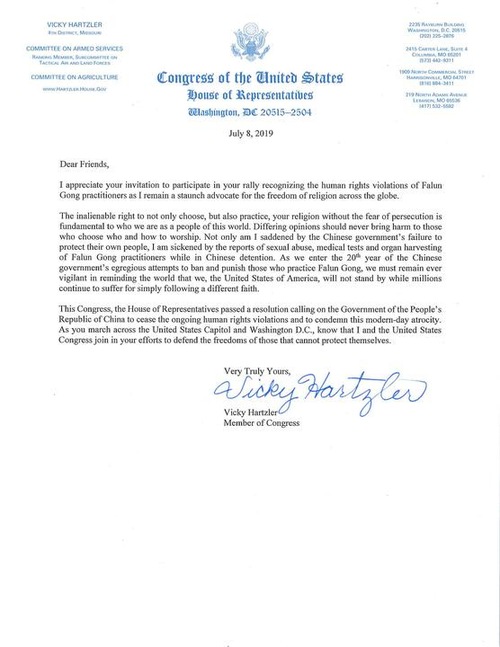 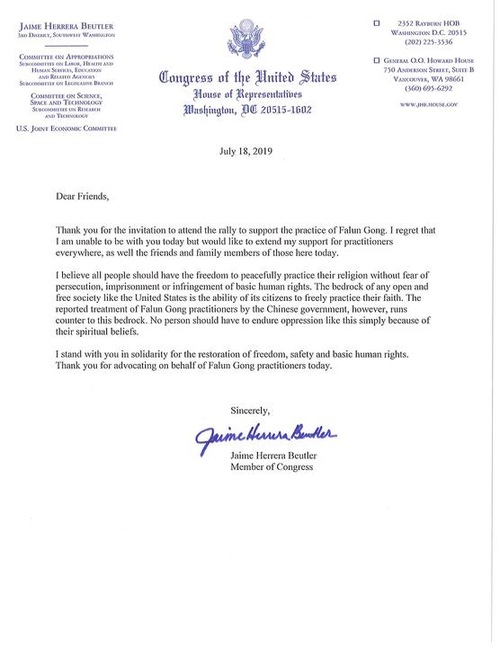 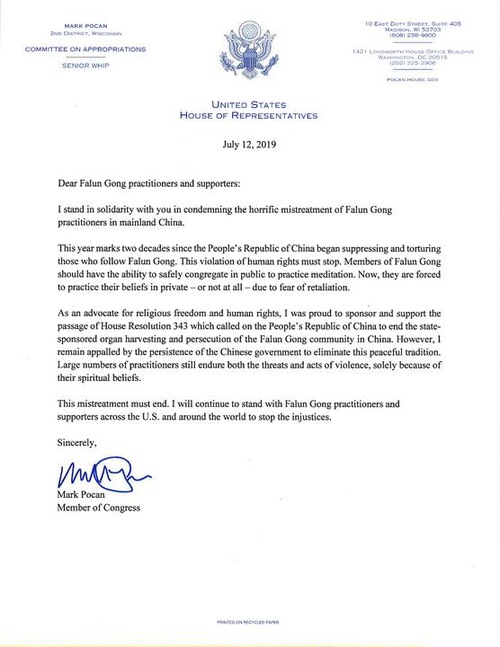 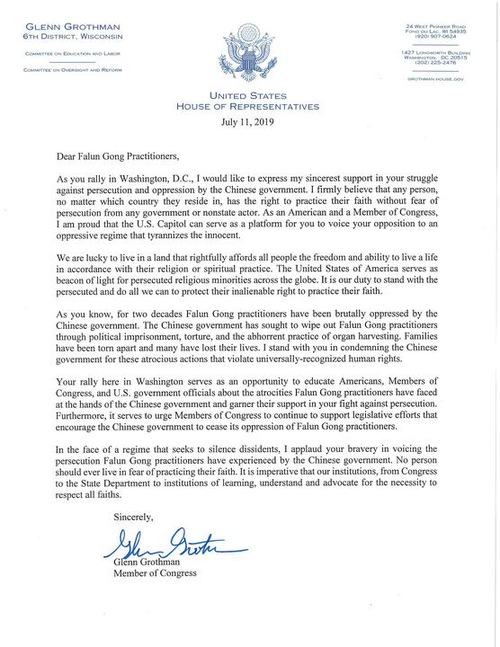 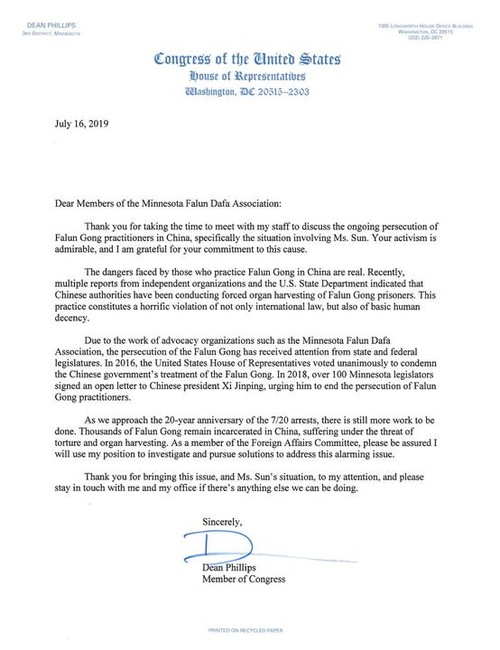 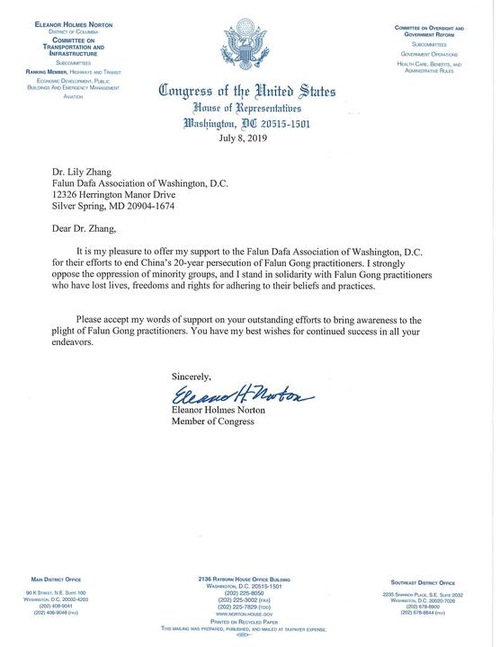 “Bangkok: Rally Calls for End to the Persecution”