Germany: Raising Awareness on International Day in Support of Victims of Torture

(Minghui.org) Falun Gong practitioners held a rally in front of the Chinese Consulate in Dusseldorf, Germany on June 26, 2019, United Nations International Day in Support of Victims of Torture. June 26 is an annual observance that gives voice to victims and survivors of torture worldwide.

By displaying posters, handing out flyers, and reading an open letter addressed to the consulate employees, the practitioners informed passersby about the Chinese Communist Party's (CCP) 20-year-long persecution of Falun Gong. They also demonstrated the Falun Gong exercises. 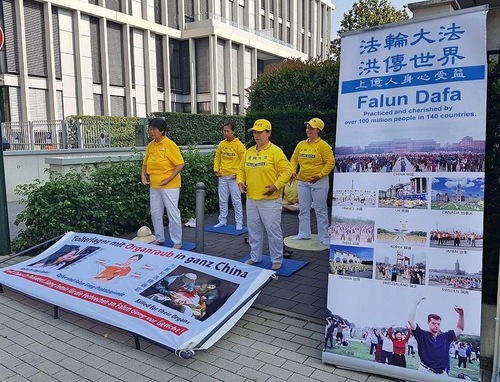 Demonstrating the Falun Gong exercises across from the Chinese Consulate 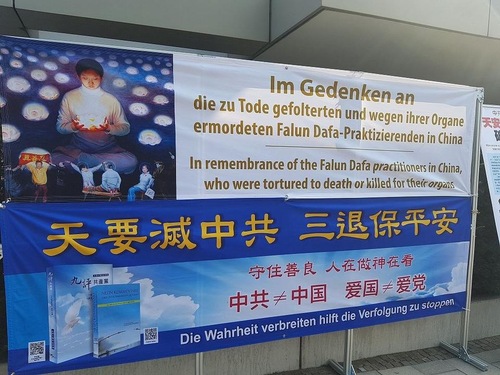 Large posters urging people to quit the CCP were displayed across from the Chinese Consulate.

Part of their open letter to the consulate employees read, “Human rights are a universal value. We urge you not be an accomplice in the CCP's persecution.”

They encouraged the consulate employees to choose kindness and justice, which would bring them a good future. 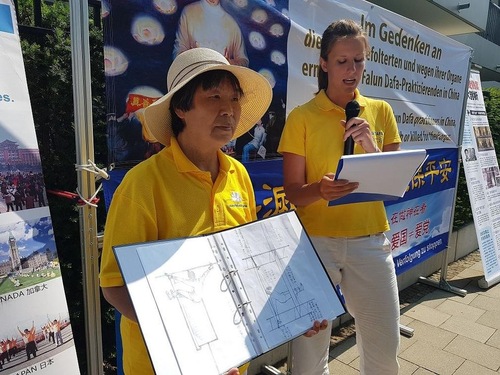 Practitioner Xu displays illustrations of the different ways she was tortured.

The practitioners told several police officers on duty across the street, “Every sentence in the letter is true.”

One of the officers said, “People who lived in East Germany can understand this. I think I would have not been a police officer if I'd lived in the former East Germany.”

In downtown Dusseldorf practitioners later set up a booth to collect signatures on a petition calling for an end to the persecution. Local people signed to express their support after they heard about Falun Gong and the CCP's persecution. 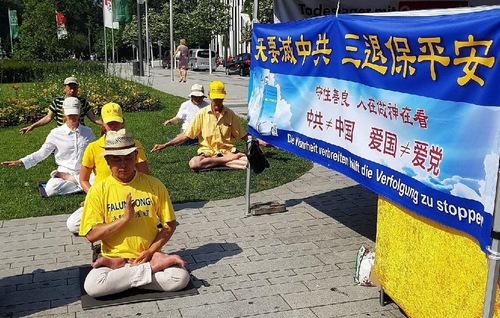 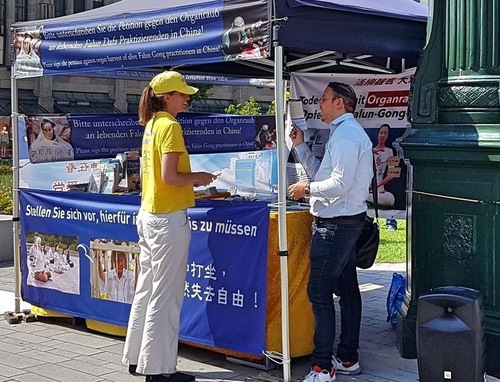 Talking to a passerby about Falun Gong

The practitioners spoke to a man, who asked to remain unnamed, who told them that he had taken more than 300 business trips to China, and also visited China with the current German Federal Minister of Finance Peter Altmaier and discussed human rights issues while there. He believes the CCP is a dictatorship.

Due to the high temperatures, some schools in Dusseldorf were closed that day. Despite the heat, the practitioners demonstrated the five Falun Gong exercises. Many people spoke of being drawn to the exercises by the atmosphere of peace that seemed to surround them. They wanted to learn more about Falun Gong.

Falun Gong was first taught to the public in 1992. Nearly 100 million people across China were soon practicing Falun Gong after experiencing improvements in their health and character.

Jiang Zemin, the former head of the communist regime, perceived the spiritual discipline's growing popularity as a threat to the CCP's atheistic ideology and issued an order to ban Falun Gong on July 20, 1999.

Minghui.org has confirmed the deaths of thousands of Falun Gong practitioners since the onset of the persecution, 20 years ago. The actual number of deaths is suspected to be much higher. More have been imprisoned and tortured for their faith.

Under Jiang's direction, the CCP established the 610 Office, an extralegal security organization with the power to override the police and judicial systems, and whose sole function is to carry out the persecution of Falun Gong.