(Minghui.org) Ms. Huang Qian’s parents are already in their 70s and should be enjoying their golden years, but they have to take care of a grown daughter who was diagnosed with severe mental illness 10 years ago. In fact, the burden is heavy: Ms. Huang dumps cooking oil in the drain and trashes bags of rice, saying that the food is poisonous. She refuses to drink tap water, claiming it is toxic. To make things worse, she does not recognize her parents, and murmurs to herself, “Where have they gone?”

Ms. Huang was a fine arts teacher – young, happy and open-minded. However, because of practicing Falun Gong, she was taken to a labor camp twice – once in 2000 and a second time in 2009. There she suffered physical, sexual, and psychiatric abuse, leaving her traumatized and mentally ill.

Falun Gong, also known as Falun Dafa, is a meditation system that consists of five gentle exercises and teachings based on the principles of Truthfulness-Compassion-Forbearance. After the Chinese Communist Party (CCP) began to suppress the practice in July 1999, countless numbers of practitioners have been detained, imprisoned, and tortured in the government's attempts to force them to renounce their belief.

Ms. Huang worked for Huayang Vocational High School in Chengdu City, Sichuan Province. Like her parents, she enjoyed teaching. The practice of Falun Dafa made her more responsible both at work and towards her family. She and her parents had a close relationship and they lived a harmonious life.

After the persecution started in 1999, 26-years-old Ms. Huang went to Beijing to appeal for the right to practice Falun Gong. She was stopped by the police, arrested, detained and fined.

After her release on April 20, 2000, Ms. Huang was met by a group of police officers at her home. They announced that she would be taken to a labor camp because of twice going to appeal for justice in Beijing. She was immediately taken to the Nanmusi Labor Camp, where she was brutally tortured. 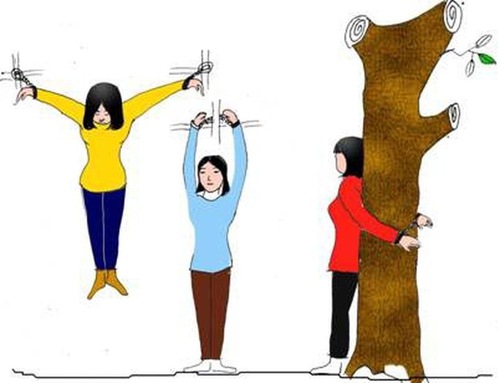 Torture illustrations: hanging up high and handcuffing backward around a tree

One practitioner, Ms. Zhou Min from Deyang, who was handcuffed to a tree with her arms behind her back, was beaten until she lost consciousness. Li and the guards also handcuffed Ms. Huang to a tree. They stuffed socks in her mouth and shocked her with electric batons.

To avoid further persecution, Ms. Huang went to Shenzhen City, Guandong Province, in 2004 and worked as an interior designer. She liked the new place very much.

After she talked to someone about Falun Gong on Bujizhen Street on March 5, 2009, a plainclothes police officer followed her. When the officer pretended he was interested in learning Falun Gong, Ms. Huang gave him an amulet. Shortly after, officers from the Luogang Police Station arrested Ms. Huang and body searched her. They found 21 banknotes with phrases related to Falun Gong printed on them, as well as two amulets.

During a 15-day detention at the Xili Detention Center in Shenzhen, Ms. Huang clarified the truth about Falun Gong and the persecution. As soon as the 610 Office was informed, they and local government agencies took her to serve a two-year labor camp term. She went on a hunger strike for 12 days and refused to sign any documents renouncing Falun Gong. She was taken to the Sanshui Women’s Labor Camp on March 24.

At the second labor camp, Ms. Huang was given unknown drugs and was sexually assaulted at the camp. When her parents went to visit her, they could tell that something was wrong. The guards repeatedly said that Ms. Huang refused to take a shower despite the hot temperature in Guangdong Province. They said that she claimed she would rather remain dirty. According to the guards, Ms. Huang often called a certain police officer a rapist. 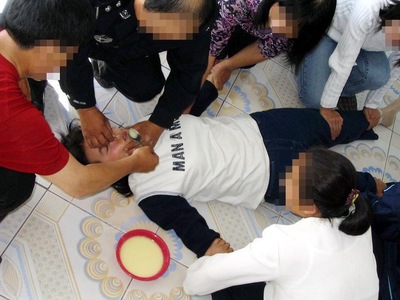 Eventually she refused to eat or drink saying that the food caused her to feel dizzy, fatigued and nauseous. She understood that the food was laced with nerve damaging drugs. The guards brutally force-fed her and threatened her, telling her not to speak of the abuse to anyone.

Ms. Huang’s labor camp term was extended by two months. Despite the fact that the trauma she'd experienced was leading to mental illness, the authorities took her to the Xinjin Brainwashing Center. At the brainwashing center, she broke a television set.

When Ms. Huang returned home, instead of a joyful family reunion, her family discovered that their nightmare had just started. Their polite, good-natured daughter had changed into someone who used foul language all the time. She cut her hair and tried to be as unattractive as possible so that no man would look at her “with wicked eyes.” She covered the windows with tape, declaring that the tape would prevent “bad people from coming in.”

It has been 10 years, and the tragedy of Ms. Huang and her parents has not ended. To further the injustice and the family's distress, the authorities are claiming that she became mentally ill because of practicing Falun Gong.