(Minghui.org) A commentary titled “Bulka: China still harvests organs from prisoners – and the world does little to stop it” was published in the Ottawa Citizen on July 5, 2019.

The commentary was authored by Rabbi Dr. Reuven P. Bulka, C.M., a Rabbi Emeritus of Congregation Machzikei Hadas in Ottawa and past chair of the Trillium Gift of Life Network.

The commentary opened with, “First, they denied. Then, they said they would stop it. Now, it turns out that they never did stop it. The ugly, murderous practice continues unchecked.”

“This is murder, brutal murder: taking organs from the bodies of live people, because those organs are the freshest and best. Even though there was irrefutable evidence this was happening, the Chinese authorities denied it. This heinous practice was originally called out by Canadians David Matas and David Kilgour in their famous report of their painstaking research,” he wrote. 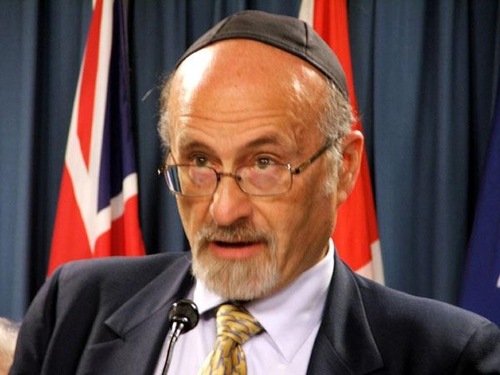 He described how the Chinese authorities had repeatedly denied they were committing these organ harvesting crimes, and then in 2014 incriminated themselves by announcing they would soon stop the practice of taking organs from executed prisoners.

“They thereby revealed that they are liars as well as murderers. No surprise that murderers are also liars. If life is cheap, the truth is even cheaper,” Bulka wrote.

“It is mind-boggling to think that the civilized ‘world’ applauded, rather than calling out the Chinese government and demanding they stop the murders immediately rather than eventually. That remains a truly horrible stain."

He wrote that based on the report from the China Tribunal that was held in London recently, the Chinese authorities are still committing these crimes. He said it was strange that the Tribunal's findings were not prominently reported in Western media.

He referred to the “painfully graphic statement” of the chair of the China Tribunal, Sir Geoffrey Nice QC, that appeared on June 17 in The Guardian: “The conclusion shows that very many people have died indescribably hideous deaths for no reason, that more may suffer in similar ways and that all of us live on a planet where extreme wickedness may be found in the power of those, for the time being, running a country with one of the oldest civilizations known to modern man.”

Bulka referred to available statistics about organ transplants in China, whereby 90,000 transplants are said to take place every year, and the waiting time for an organ is just a few weeks. He said patients are also given assurance that a backup organ will be available if the original organ is rejected by the patient's body. “That is the reality in China, and, as Matas and Kilgour correctly pointed out, can only be explained as resulting from the murders of readily available 'prisoners' – mostly members of the Falun Gong, but including Tibetans, Uighur Muslims and Christian sects,” he wrote.

He wrote that the Chinese Embassy in London issued a predicable response to the allegations: “The Chinese government always follows the World Health Organization’s guiding principles on human organ transplant, and has strengthened its management on organ transplant … providing that human organ donation must be done voluntarily and gratis …”

“The facts reveal the lie,” he wrote.

He said that sometimes little can be done about the human rights abuses that happen all around the world with people murdered on a daily basis. “But with this situation, there are no excuses. We have some muscle, and we must use it. Governments must hold the Chinese government to account,” he wrote.

He pointed out that some countries have banned transplant tourism to China; so should Canada and the United States.

He wrote that any deal made with “a murderous regime that regularly kills its citizens to make money is worth the paper on which it is written.”

“Any deal with China, on any matter, must include an insistence that this barbaric practice stop immediately, coupled with a mechanism whereby such stoppage is verifiable.”

He concluded, “We, who rush to buy Chinese products, should ask ourselves if we are thereby supporting murder, even though that is surely not our intention. Maybe we can send a life-saving message by refusing to buy Made in China products if we can help it. Imagine saving lives merely through a change in buying habit. It sends a loud message, and is a profound manifestation of caring.”

“Improving My Understanding of Sickness Karma”