(Minghui.org) Today's news from China includes incidents of persecution that took place in 8 cities or counties in 7 provinces, where at least 12 practitioners were recently persecuted for their belief. 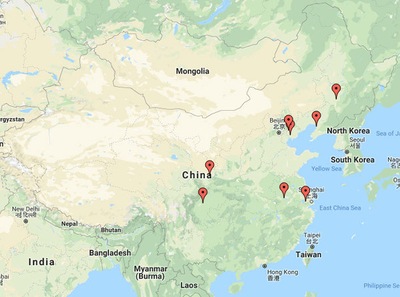 Director Wang Jihao of the Qinghe Street Police Station instructed other officers to break into Ms. Zhang Yuanyuan’s home and arrest her on the afternoon of April 20, 2019. They ransacked her residence and confiscated Falun Gong books, a notebook computer, printer, photos of the founder of Falun Gong, and 105 yuan in paper bills with information about Falun Gong printed on them. Ms. Zhang was taken to the Weizigou Detention Center, but was not accepted because she had high blood pressure. She was then released.

The officers broke into Ms. Zhang’s home again on May 5, and ransacked it. They took her to the No.4 Detention Center, but the authorities there refused to accept her for having high blood pressure. She was released after her husband was force to pay 5,000 yuan.

Officer Jiang Lai and two police assistants went to Ms. Zhang’s home and arrested her for the third time on the morning of June 24. They confiscated the book Zhuan Falun. Ms. Zhang was taken to the Chaoyang District Procuratorate, who decided to extend their investigation and held her for 15 days.

Mr. Shan Baogui is due to be tried in the Yingkou City Detention Center by the Zhanqian District Court on the morning of July 3, 2019.

Ms. Li Xiuhua and Ms. Deng Deping were arrested by officers from the Longdong Police Station on May 13, 2019. They were taken to the Tangshan City No. 1 Detention Center, and officially placed under arrest on June 20, 2019.

Officers from the Zunhua City Domestic Security Division broke into Ms. Zhuang Xiuhong’s home on June 24, 2019. They arrested her and ransacked her residence.

Another practitioner with the surname Du was reported to the police for talking to people about Falun Gong in Huzhuangzi Village, Xisanli Township, on June 14. Practitioner Du was arrested by officers from the Xisanli Police Station, and was transferred to the Zunhua Domestic Security Division later that day. Practitioner Du was taken to the Tangshan City Detention Center on June 15. Family visits have not been allowed.

Ms. He Weiling was arrested by officers from the Shuanggang Police Station on May 11, 2019, for distributing Falun Gong materials. She was held in the Hefei City Detention Center for 12 days.

When Ms. He’s husband went to the detention center to pick her up, the police refused to release her. They forced Ms. He to write a confession, but she refused. The police then held her for a day before taking her back to the Hefei Detention Center. She has now been officially placed under arrest.

Ms. Jiang Sugen from the Huqiu District was reported to the police for talking to people about Falun Gong on May 29, 2019. She was arrested by officers from the Mudu Police Station and the Suzhou 610 Office. Over a dozen officers went to her home and ransacked the place. They confiscated an audio player, Falun Gong books, a flash memory card, a phone book, and Ms. Jiang’s daughter’s computer.

Ms. Jiang was taken to the police station, but when they found out that she had a rapid increase in her blood pressure they took her to a hospital. She was later released on bail.

Ms. Jiang has been arrested and had her home ransacked many times. Her husband passed away after being persecuted numerous times.

Ms. Wang Qiaorui from the Maiji District had been working in the Xinjiang Autonomous Region for several months in 2018 when she went missing. Her whereabouts are unknown.

Mr. Zhang Zhifeng and several other practitioners who were in contact with Ms. Wang during that time have been arrested by the Maiji District police. Their homes have been ransacked.