(Minghui.org) Falun Gong practitioners from the Toronto area have been traveling to Niagara Falls every day since last summer to introduce the practice to the public and raise awareness of the ongoing persecution in China.

As more tourists from around the world have shown interest in learning Falun Gong, more young practitioners who are fluent in English have joined the practitioners who travel to Niagara Falls each day. They understand that so many people are waiting to learn the practice and hear about the persecution, and it is their responsibility to do what they can and tell people – especially visitors from China – about the benefits of the practice and why the persecution is wrong.

Video: Practitioners at Niagara Falls introduce Falun Gong and raise awareness of the persecution in China. 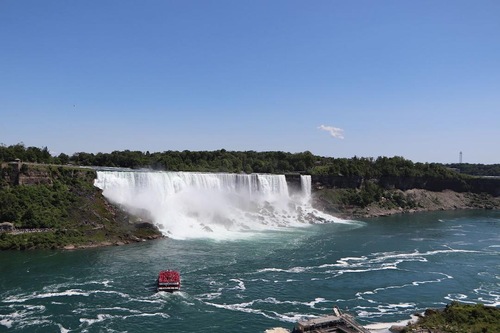 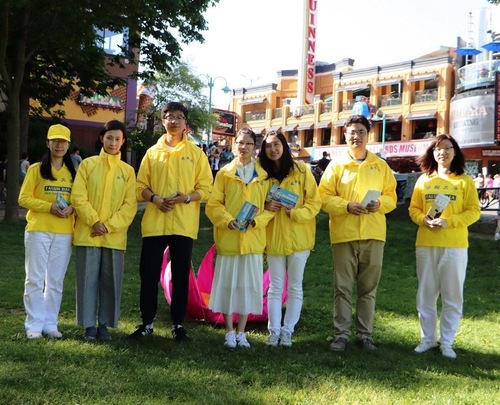 Falun Gong practitioners travel from the Toronto area to Niagara Falls each day to raise awareness of the persecution of Falun Gong in China. 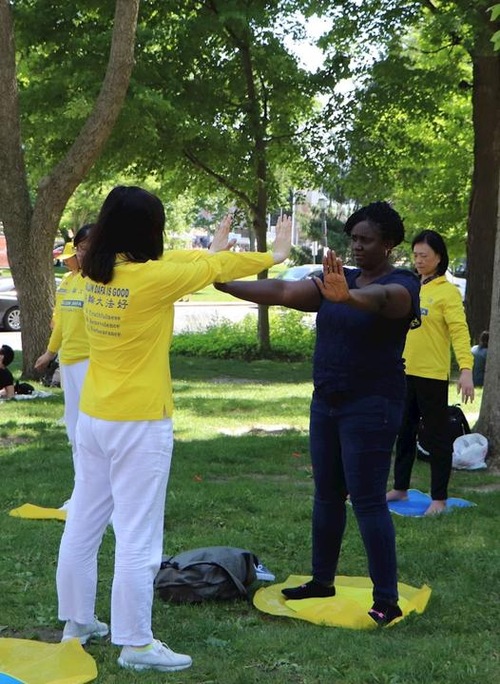 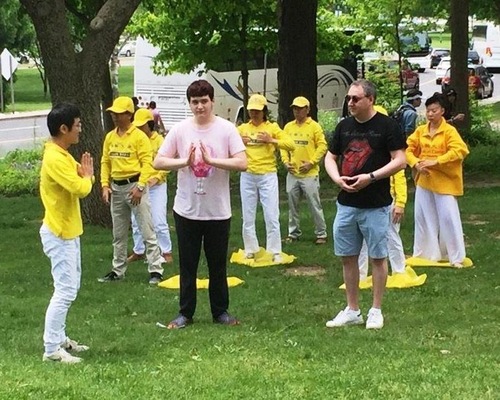 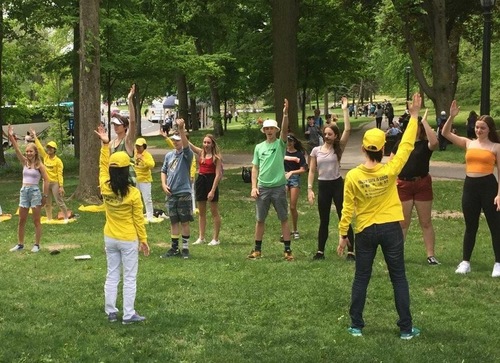 Falun Gong practitioners teach the exercises to passersby who are interested in learning the practice. 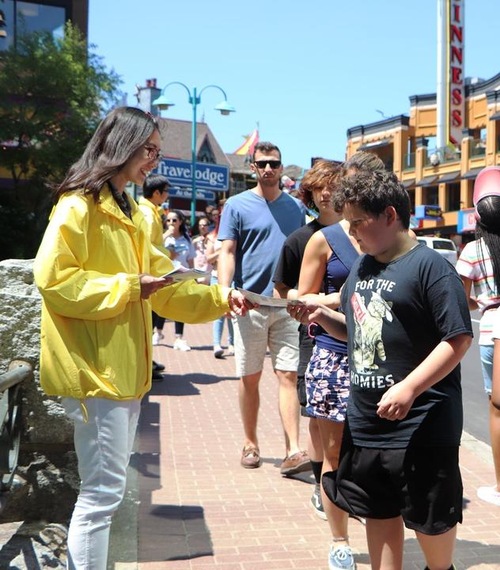 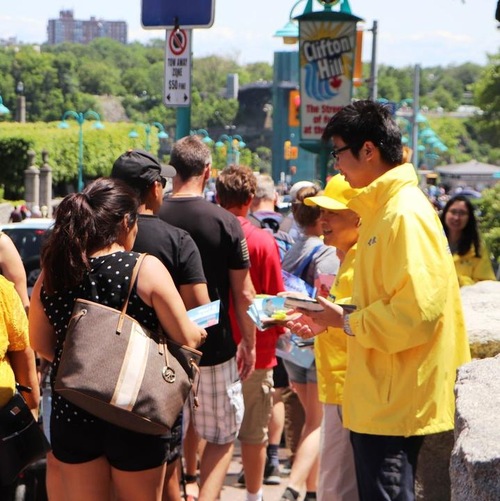 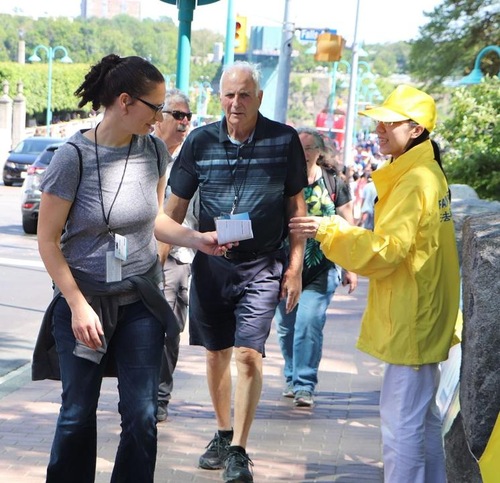 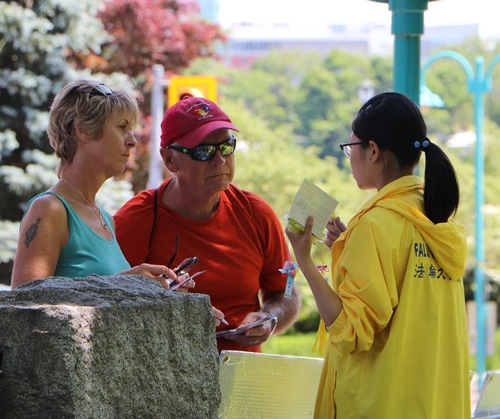 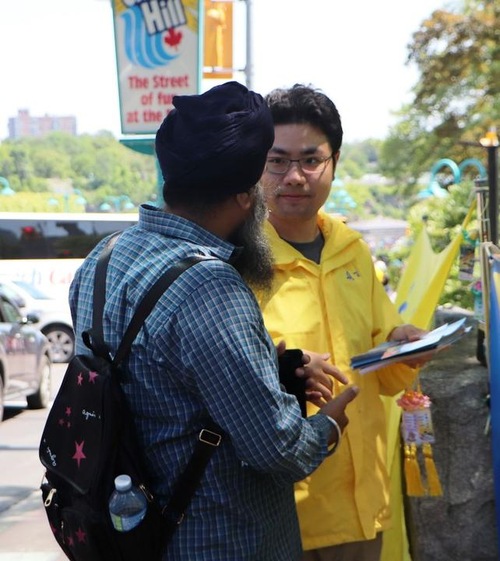 Falun Gong practitioners talk to people about the 20-year persecution in China.

A Responsibility to Raise Awareness of the Persecution 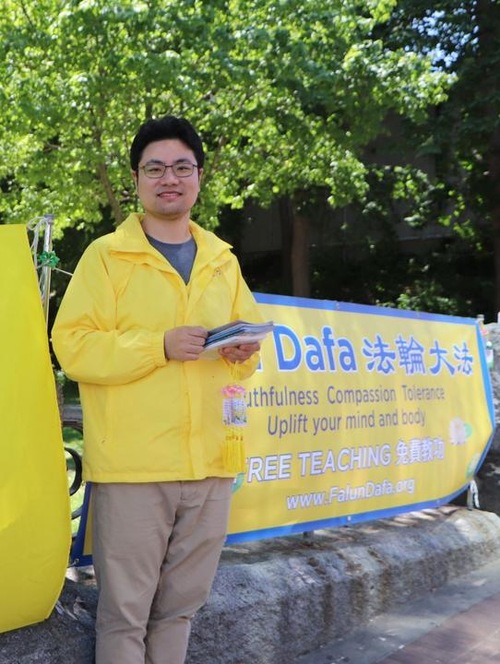 Xuchen graduated from a university in the United States and now works in Canada. On this particular day at Niagara Falls, his time was completely occupied with teaching tourists the exercises, giving out fliers and talking to people about the persecution.

Xuchen started practicing Falun Gong at the end of 2017. His grandmother has been a practitioner since 1996, and he used to study the teachings with her when he was little. As he grew up, he became distracted by modern society and stopped practicing.

“At the end of 2017, my aunt, who is also a practitioner, encouraged me to join a Fa study group for young people. While I was studying the Fa, I realized how morally degenerate society is. I was startled and thought that I definitely did not want to be like that. I decided to pick up the practice with the intention of returning to my true, good nature,” he said.

“I quit many bad habits and stopped playing around like other young people. At first, thought karma bothered me a lot. I would have disrespectful thoughts about Master [Master Li Hongzhi, the founder of Falun Gong] and the Fa. I’d feel horrible having those thoughts. But through studying the Fa more, I knew that I must continue the practice no matter what. As my righteous thoughts emerged, I did better in the practice. Then the bad thoughts would come back and the process would repeat.

“My thought karma was strong the first three months after I became a practitioner. Then the situation improved. When I was lacking righteous thoughts, I would try to suppress the thought karma and study the Fa more.

“I used to be self-centered. Master told us to think of others in whatever we do. Now I try to take a more peaceful approach when I work with others. I also try not to pay too much attention to personal interest and not be emotional when others praise or hurt me.”

Xuchen said that it was every practitioner’s responsibility to raise awareness of the 20-year-long persecution in China. “I hope to help people with predestined relationships and give them an opportunity to learn about the persecution. Most non-Chinese people did not grow up in China and were not brainwashed by the Chinese communist ideology. They can feel the peaceful energy when they watch us exercise. They have no problem accepting what we tell them about the practice and the persecution. I am really moved seeing them so excited about the practice.”

“Happy to Be Dragged Here to Help” 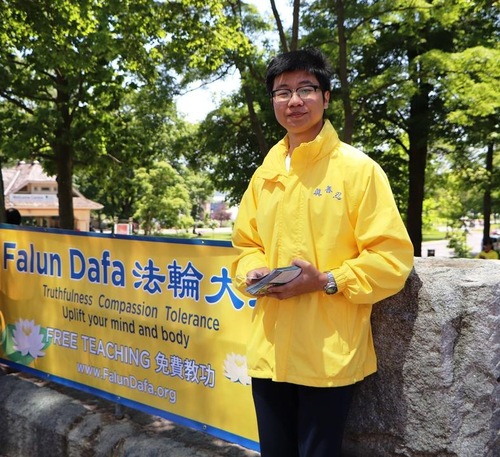 This was Robert’s first time at Niagara Falls with the other practitioners, and he admitted that at first he hadn't really wanted to be there. It was Xuchen, Robert’s cousin, who dragged him out there. “I was quite unhappy about it because I wanted to rest before another event. But I feel great today, especially knowing that so many people were eager to know what Falun Gong is and learn the exercises. I have to thank my cousin,” Robert said.

Robert shared how he decided to become a practitioner. “I had a dream and in the dream I was walking to school with a classmate. I stopped to tie my shoelaces and when I got up, I couldn’t find my friend. I went to school and found that all the seats in all the classrooms were taken. There wasn’t a place for me. I woke up terrified. It was a warning that I needed to pick up the practice then or it would be too late.

“One time, a practitioner came up to me and asked if I wanted to be a drummer in the Tian Guo Marching Band. I went with him to watch them practice. The energy there was so great that I decided to join them. I later befriended another practitioner who also played the drum. His stories about starting the practice were so interesting. I gradually became part of the band.” 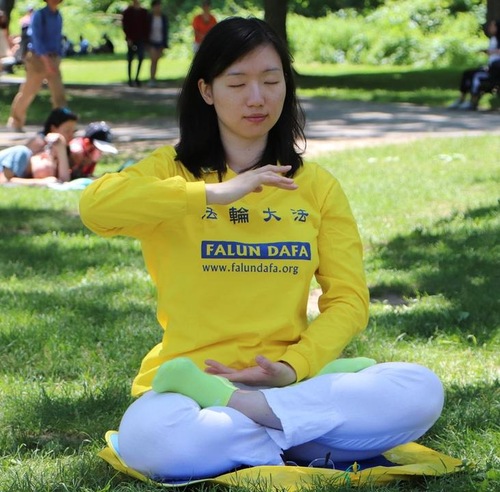 Jessie often goes to help out at Niagara Falls when she is not working.

Jessie wanted to help out at Niagara Falls more often, but never had enough time because she works in the purchasing department of a large company. She finally found time this past weekend to come to the Falls. That day, so many people wanted to learn the exercises, and she spent all day teaching them. “The energy was terrific and many people approached us as soon as we began to demonstrate the exercises. We also gave out a lot of fliers. It is a wonderful feeling and I want to come here more often,” Jessie said. 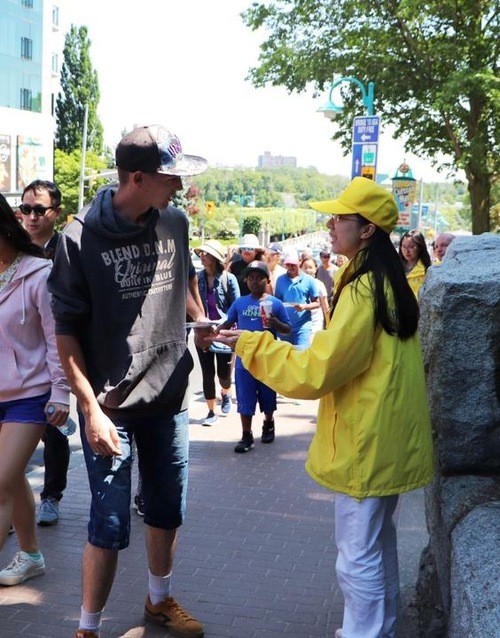 Sherry works full time for a media company that also helps promote Falun Gong. She said that she often falls into a state of just doing routine work. She wanted to come out to Niagara Falls to strengthen her righteous thoughts and help out. Sherry also wanted to help break a perceived stereotype that Falun Gong is only for the elderly.

“Seeing so many people wanting to learn the exercises, I am so moved. This was the first time I have seen so many people seriously wanting to learn the practice,” Sherry said. “My mother has been a practitioner since 1993, and I used to go to Master’s lectures with her when I was little. However, I didn’t really start actively practicing until 2010. I feel that I must cherish every minute to fulfill my responsibilities and clarify the facts of the persecution to people.”

“Former Business Owner Dies at 50 After Repeated Detention and Harassment”