(Minghui.org) An independent people's tribunal in London, established to inquire into forced organ harvesting from prisoners of conscience in China, announced its findings on June 17, 2019. The panel concluded that the Chinese Communist Party (CCP) has been harvesting organs from living Falun Gong practitioners in China for many years, and that this brutality still continues today.

Many news agencies covered the tribunal’s final judgement on June 17, including Reuters, The Guardian, Newsweek, Forbes, ABC Radio Australia, and The Globe and Mail. 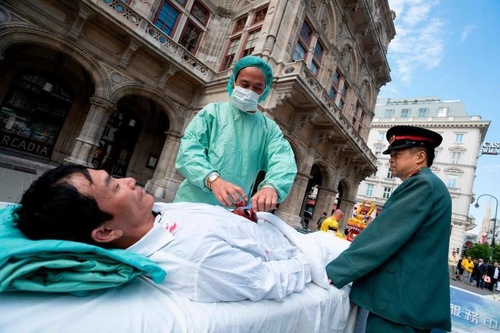 Reenactment in 2018 in Vienna, Austria, to demonstrate the Chinese Communist Party's forced organ harvesting from Falun Gong practitioners in China.

“China is murdering members of the Falun Gong spiritual group and harvesting their organs for transplant, a panel of lawyers and experts said on Monday as they invited further investigations into a potential genocide,” Sonia Elks of Reuters wrote in her article that was published on June 17.

The article explained that the conclusion was based on the final judgment from the China Tribunal whose investigations confirmed forced organ harvesting has been going on for at least 20 years in China.

Elks wrote that although Beijing repeatedly denied these accusations, the tribunal's panel of experts had found evidence that these crimes still continued and that Falun Gong practitioners are likely the main source of the organs.

“The conclusion shows that very many people have died indescribably hideous deaths for no reason,” tribunal chairman Sir Geoffrey Nice was quoted as saying in the Reuters' report.

The China Tribunal was set up by the International Coalition to End Transplant Abuse in China (ICETA). The seven-member panel in their final judgement on June 17 said these malpractices have occurred on a large scale, and are indicative of genocide. “Crimes against humanity and torture have been committed against both the Falun Gong and the Uighurs,” Elk wrote in her report for Reuters.

Jennifer Zeng, a Falun Gong practitioner testified at the tribunal that she had been subjected to blood tests and medical examinations while held in detention. She hoped the tribunal’s findings would trigger action to stop the killing.

Newsweek reported on June 17: “Prisoners in China are still being killed for their organs, an independent tribunal concluded Monday.” The author of the article, Katherine Hignett, wrote that Falun Gong practitioners are likely the principal source of organs. In addition, there is no evidence that the practice has ceased.

“Based on multiple sources of information, it has been alleged that prisoners of conscience have been killed ‘to order’ for the purposes of extracting and using their organs for profitable transplantation surgery,” the report stated, quoting the tribunal's website.

The Newsweek article also quoted Jennifer Zeng who told the tribunal that while she was detained she and other practitioners received extensive physical examinations, including X-rays and blood tests.

“When anyone disappeared from the camp, I would assume that she was released and had gone home … But in reality that cannot be confirmed, as I had no way to trace others after my release and I now fear they might have been taken to a hospital and had their organs removed without consent and thus killed in the process.”

The Guardian: China is harvesting organs from detainees

The Guardian reported that the China Tribunal was chaired by Sir Geoffrey Nice QC, a prosecutor at the international criminal tribunal for the former Yugoslavia. In a unanimous determination, the panel announced it was “certain that Falun Gong was a source - probably the principal source - of organs for forced organ harvesting.”

“The conclusion shows that very many people have died indescribably hideous deaths for no reason, that more may suffer in similar ways and that all of us live on a planet where extreme wickedness may be found in the power of those, for the time being, running a country with one of the oldest civilisations known to modern man,” said Nice, according to the report.

The article stated that the tribunal had collected evidence from medical experts, human rights investigators and others, and that waiting times for transplant in China are only several weeks. When investigators called hospitals in China, they were told that the sources for some organs were Falun Gong practitioners.

Forbes reported that a 60-page summary was released as final judgment by the Independent Tribunal Into Forced Organ Harvesting from Prisoners Of Conscience in China (the China Tribunal).

“When analyzing the crime of genocide, the China Tribunal recognized that Falun Gong and Uyghurs were specifically targeted groups and that the atrocities perpetrated fall within the scope of Article II of the UN Convention on the Prevention and Punishment of the Crime of Genocide (the Genocide Convention),” the Forbes report stated.

In addition, the article said that the China Tribunal had found that crimes against humanity had been committed as defined in Article 7 of the Rome Statute. This included, “murder; extermination; imprisonment or other severe deprivation of physical liberty in violation of fundamental rules of international law; torture; rape or any other form of sexual violence of comparable gravity; persecution on racial, national, ethnic, cultural or religious grounds that are universally recognized as impermissible under international law; and enforced disappearance.”

During a discussion at the UK House of Commons, MP Fiona Bruce had urged action from the UK government. The Forbes article said she called on the UN Human Rights Council to enact resolutions to establish, “first, a UN special rapporteur on the human rights situation in China and, secondly, a commission of inquiry to investigate the systematic, widespread and grave violations of human rights in China.”

“Grandmother-to-be Arrested for Her Faith in Falun Gong”